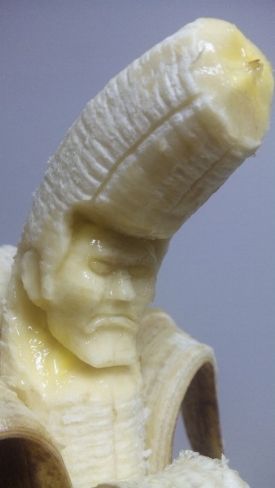 Yesterday afternoon I took an impossibly heavy (“What’s in this bitch, a corpse?!”) bag of trash to the garage.  The door was open for some reason, and when I approached the bin a squirrel LEAPED from it, and toward me.  It had its legs spread out, like a skydiver, and I nearly shat.

My heart missed a couple of beats, but the flying rodent seemed to swerve off at the last minute and scampered away.  What the hell, man??

And that stupid animal had ripped big holes in the garbage bags that were already there, and left soppy, trash juice-saturated crap all over the garage floor.  I was pissed.  It’s always something around this place.

On trash day (aka Thursday) huge, menacing black birds swoop down and start going to town on everybody’s garbage bags.  And those things can do some major damage in a short amount of time…  Yeah, I know, we should have a bin with a lid.  But I can’t see myself doing any bin shopping, anytime soon.

Sometimes I fly off the handle and go running at those giant crows (or whatever), waving my arms and hollering.  But they’re usually not impressed and just sit there watching the show.  Eventually they fly away, but make it clear they’re doing so on THEIR terms.

The freakin’ wild kingdom needs to leave our trash alone.

I finished reading Stephen King’s 11/22/63 on Saturday night.  It’s nearly a thousand pages and I polished it off in 15 days.  That’s really fast for me.  I enjoyed it, but it bothered me that characters in the past kept using phrases that I know were not invented at the time.  Like, for instance, “asshat.”  I mean, seriously.

But it was entertaining, and that’s all I wanted.  I now have the confidence to tackle The Stand, but it’ll have to be on my Kindle, and sometime in the future.  I can’t read two thousand-page books in a row.  I need to cleanse the palate with something a little less over-the-top.

I read a lot faster with the Kindle, for some reason.  Part of it has to do with the light built into the cover — I can read in bed without disturbing Toney — but I think it’s more than that.  I can’t put my finger on the reason, but I rip through books on that thing.  I love it.

My three beers of the past week were Yards Philadelphia Pale Ale.  I’d had the Yards IPA before, but never the pale ale.  They were excellent.  There was a definite grapefruit taste to it, along the lines of Dogfish Head 60 Minute Ale, which is one of my favorites.

Starting next week I might take advantage of Wegmans’ “create your own 6 pack” section.  They have a shitload of single bottles, and you can pick and choose and create your own sixer — for $11.99, I think.  That way I can enjoy three new beers in one night, but not go over my self-imposed weekly limit.

And I know some of you scoffed at this scheme, but it’s gone incredibly well, so far.  It’s been perfect.

I hate to toot my own horn here, but I said something yesterday that was pretty goddamned funny.  At least I think so…  The younger Secret was telling me a story about some kid at his school who happens to have an unusual name.  That wasn’t the point of the tale, but it’s what I seized on.

“Indian?  Do you mean neurosurgeon, or feather?”

Yes, I enjoyed that.  Toney just rolled her eyes, but it still makes me laugh.  What of it?

Today is Cyber Monday (Cyber?? What is this, 1995?), and if you’re shopping, as required by law, please remember to use our Amazon links.  Here they are again:  Amazon US and Amazon Canada.  I appreciate your support!

And finally, I have a questionable question for you guys today.  Imagine, if you will, a teenage boy from the 1970s transported to 2011.  What about him would make people believe he might be a poofter?  Hey, I told you it was questionable…

Can you come up with more?  And it doesn’t have to be limited to rumors of poofterism.  It can just be things that would make people raise an eyebrow.

And we can do it the other way around, too.  What about a current teenager (boy or girl) transported to, say, 1976?  What would make people think they were a bit strange?

Please use the comments link below.