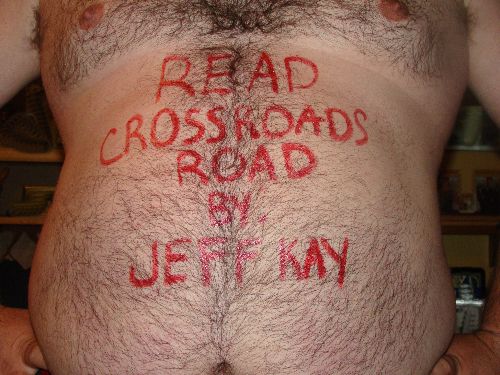 When I was in New York a few weeks ago, Duff told me about a guy on Etsy who would write anything you’d like on his beer gut, photograph it, and send you the picture for a price.  She jokingly suggested I promote the book using gutvertising, and I told her it sounded like a fantastic idea.

Unfortunately, when I got home I checked it out and the dude wasn’t taking any new orders.  Apparently his belly was booked, so I forgot about it.

But over the weekend I was on fiverr, and looked to see if anyone was making a similar offer.  And I hit the gutpot!  The photo is above, and I fully expect Crossroads Road to reach the New York Times bestseller list by mid-August, as a result of this publicity coup.

I posted the picture on Facebook on Saturday, and someone wanted to know if it was a self-portrait.  I’m deeply offended…  I’m nowhere near that hairy.

The past few days were so brutally hot here, I almost didn’t leave the house.  I worked for six hours on Thursday, and went to the grocery store for ice cream on Friday, but other than that… I was hunkered down.  I didn’t even shave all weekend, and looked like a drunken bum.  A completely sober, Kindle-reading drunken bum.

It was crazy-hot.  We had our Soviet humboxes working ‘round the clock, which kept the house cool, but whenever I walked past a window I could feel oven-like heat radiating through them.  It was like that Twilight Zone episode where it kept getting hotter and hotter, and an artist’s oil paintings began running down a wall.  It’s a little less Zoneish today, though.

On Saturday evening I watched True Grit, and liked it pretty well. It was entertaining, but I felt like the suspense could’ve been ratcheted up a bit.  Plus, it irritated me that nobody used a contraction in that movie.  Is that the way they talked in cowboy days?  Had “can’t” and “won’t” not been invented yet?  It bothered me.

Next up in the Netflix queue:  Insidious.  Any opinions?

I also wrote an article about John Hughes on Saturday, for CrossroadsRoad.  You can read it here.  I was a big fan of Hughes before (and after) he started making movies.  His National Lampoon contributions were huge influences, and caused me to make my first pitiful attempts at humor writing.  Two pieces in particular, this one and this one, knocked me on my butt.  I wanted to be like John Hughes, even before most people knew his name.

A few weeks ago I decided to rent all the Hughes movies through Netflix, and watch them again in order.  But the first one was so bad (National Lampoon’s Class Reunion), I abandoned the exercise.  Wotta turd.  He made some great films, but that wasn’t one of them.  Flounder couldn’t even save it.  Maybe I’ll try it again, after Insidious?

Oh, and speaking of Netflix… I’m softening on their price-change.  I think I might just let it ride, and pay the extra six bucks per month.  Are you wavering, or still fired-up?  I think I’m just gonna pay ‘em.  It’s only six dollars, and the shit is fantastic.

Finally, I saw a news report about a rise in violence during this current heat wave.  They said road rage is rampant, and people are apparently throwing haymakers at the slightest provocation.  And it got me to thinking… I don’t believe I have any good road rage stories.

My dad once saw a person rear-end someone in Charleston, and the man whose car was hit jumped out with a pipe and beat the hell out of the guy.  He said it was incredibly brutal, and there was blood everywhere.

I’ve never seen anything like that.  And the worst thing I’ve ever done is flip someone off.  I don’t do that very often anymore, because it can lead to a bullet through the neck.  But what about you?  Do you have any good road rage stories to share?  If so, please use the comments link below.