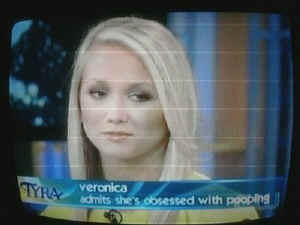 Our yard sale has come and gone, and it was a bit of a disappointment.  We had some decent items this time, at good prices, and had it in our minds that we should make around $300.  You know how you can feel in your bones what the realistic outcome is going to be?  Both Toney and I surveyed our driveway offerings and agreed: three hundred bucks.

But there wasn’t much traffic, and we only made $92 during the day.  We had big neon signs all around the neighborhood, and ran an ad on Craigslist, but it wasn’t exactly a tsunami of people clutching twenty dollar bills.  We were disgusted as we began packing-up the remaining crap, and moving it inside the garage.

“Wotta bust,” I said, while carrying an antique headboard back to storage.

But some weird things happened…  Around 7 pm on Saturday night a couple knocked on our door and asked if we had anything left from the sale.  And they ended up buying $20 worth of stuff.  Then the same thing happened on Sunday afternoon.  Those folks spent another $35.

So, it was still only about half of what we expected.  But it turned out to be a little better than the original tally.  Still… I don’t think it was worth the hassle.  Toney and I (mostly Toney) put some significant effort into that so-called sale.  Oh well.

Since I was already in the basement, rooting around in our junk, I decided to take the plunge and put some of my DVDs on half dotcom.  This represents one of eight or nine identical-sized cartons of discs I received during my first three or four years of living here.  Eventually I’ll list them all, hopefully.

When I was negotiating my new job in Scranton, I was in a great position to bargain.  They’d dragged their feet and were under pressure to have someone onsite immediately.  I knew this, because I had many spies within the company, and used the information to my benefit.

On the day they made the offer, I told them I’d need another $10,000.  I thought they’d maybe meet me halfway, but they said, “Done!”  Then I told them I wanted a copy of every new DVD the company distributes, and again, they said, “Not a problem.”  It was crazy.  I thought about asking for a car allowance, but decided not to push my luck.

So, for the first few years I received boxes of DVDs every two weeks, via UPS.  Most of it was stuff I had no interest in, but it made me feel good, anyway.  I’d NEGOTIATED that shit.

Unfortunately, I didn’t have this agreement in writing, and some bean-counter eventually questioned why I was being sent all those discs.  And it all came crashing down…

In any case, I’m offering them for sale at half dotcom.  Almost all are still shrinkwrapped, in brand new condition.  A few are already out of print.  If any of you guys see anything that interests you, I’m happy to offer a 20% Surf Reporter discount.  Just email me.  And I’ll be putting more up there soon.  I’ve got a metric shitload.

Over the weekend another Twitter hashtag game kicked-up, and I became obsessed for an hour or so.  This one was #smartermovies.  You’re supposed to take existing movie titles, and make them “smarter.”  Here are the ones I posted:

Bend It Like Hawking
George Will Hunting
Being Jonas Salk
The Hills Have an Open Mind
Mississippi Learning
We Are Thurgood Marshall
A Streetcar Named Descartes
The Taking of Pelham 3.14159265
There’s Something About Machiavelli

A waste of time?  Perhaps.  But it was fun, and better than watching another episode of An Obnoxious Bastard Eats Large Sandwiches, or Homosexuals Suggest Throw Pillows, or whatever.

I have more to report from the past few days, but I’m all outta time.  I was five minutes late for work on Sunday, because of the Devil’s Parkway, so I’d better call it a day and hit the road.

What did you guys do this past weekend?  Please tell us about it in the comments.  Also, if you’d like to continue with the #smartermovies ridiculousness, please do so.