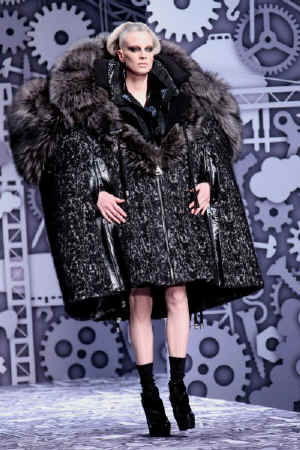 Over the weekend the older boy took part in a high school district championship swim meet, and it was fairly mind-blowing.  I’ve been to many, many meets through the years, but wasn’t prepared for this one.  Raucous is the best word to describe it, I think.

We walked in on Friday evening, and the noise was unbelievable.  Every seat was taken, and this was no tiny facility.  The audience was huge, and it sounded like everyone was entered in a contest to be the first to permanently destroy their voice box via sustained yelling.  Some people were holding up signs, there was music blaring over the loudspeakers, and it was hotter than an August scrotum in there.

There was no available seating, so we had to stand way off to the side.  At one point some unknown dance song began playing, there was a shriek of recognition, and suddenly half the swimmers started doing some sort of synchronized line dance.  I have no idea…  It was mostly girls, but there were plenty of guys involved in this spectacle, as well.  I’d like the record to show, however, that our boy was not among them.  Thank you very much.

Once the actual events kicked off, it seemed like the decibel level actually increased, which I would’ve previously said was impossible.  My ears were buzzing from the onslaught, and condensation kept dripping from the ceiling – most likely from the sweat of the crazed audience.  Blecch.

We didn’t have competitive swimming at my high school, but I probably would’ve sniffed and sneered at it (as I am wont to do).  However, the electricity in that building was more ratcheted-up than at any sporting event I’ve ever attended.  And our son put in at least twenty hours of intense practice every week, for many months.  It’s serious business, and requires a level of dedication that would’ve eliminated my ass on Thursday of the first week.  Possibly Wednesday.

On Saturday night he swam a new personal best time in his strongest event, shaving off more then four full seconds.  And that’s a lot…  Apparently it was the charged atmosphere that made the difference.  He’s only in ninth grade, and is improving at an accelerated clip.  He gives it his all, without a single complaint.  And he makes me proud.

On Thursday night the swimmers who qualified for districts got together for a pasta dinner, a bunker-buster of carbs, and Toney, the younger Secret, and I went to Five Guys.  I ordered my usual:  a cheeseburger with lettuce, tomato, onions, green peppers (yum), ketchup, and mustard.  And the three of us split a large order of fries, which is practically served in a 55-gallon drum.

But there was a mix-up, and they didn’t put green peppers on my burger at all.  No, they put jalapenos on there, instead.  And these weren’t just normal jalapenos, they were some kind of souped-up pepper that nearly made the top of my head flip open.

My lips were numb, crystal-clear snot started pouring from my nose, and it felt like my sinuses were aflame.  But I just took a fry, flicked off the offending items, and continued eating.  About an hour later I stopped talking like Dick Clark, and Toney could understand what I was saying: “Damn, that shit is good.” My enjoyment of Five Guys will not be curtailed.

My “book” is now officially submitted to the United States Copyright Office.  I filled out the John Holmes-sized questionnaire, paid the fee ($35), and uploaded the file to them.  When I received the confirmation email – from the U.S. government – I felt a twinge of panic, like I was poking a hornet’s nest with a stick.  But maybe I can finally start calling it a book now, without the quotes?  …No, probably not.

Based on the feedback of Surf Reporters, I decided NOT to watch Shutter Island over the weekend.  Thanks for your advice on that one.  But I did watch The Social Network, and loved it.  In fact, I’m thinking about buying a copy of the DVD.  I think it’s a movie I might want to watch once a year.  And there aren’t too many of those.

Also, the boys and I have been watching the new Chris Elliott series, Eagleheart, on Adult Swim/Cartoon Network.  Each episode is only fifteen minutes long, for some reason, but they’re absurd and hilarious.  The latest installment, featuring The Death Punch, is making me laugh just thinking about it.  Some people can’t stomach Chris Elliott, but I’m a big fan.  I’m glad he’s back on TV.

And finally, I’ve got a questionable Question for you guys today, based on a text message I received from metten yesterday.  He sent me a note that said something along the lines of, “How many breasts (or pictures/videos of breasts) do you think you’ve seen in your life?”

Yes, these are the kinds of intellectual exercises my friends and I engage in.  What of it?

But that’s not really the Question…  I’d like to know what personal statistics you’d like to learn, if it was somehow possible.  Number of beers consumed?  Number of farts since birth?  Number of times you’ve wished fiery death on another driver?  You know, things along those lines.

So, tell us the categories.  And I’ll be back on Tuesday, with something new from Nancy.  This one pisses me off a little, because it involves me – kinda sorta.  Grrr…  I’ll tell you about it tomorrow.