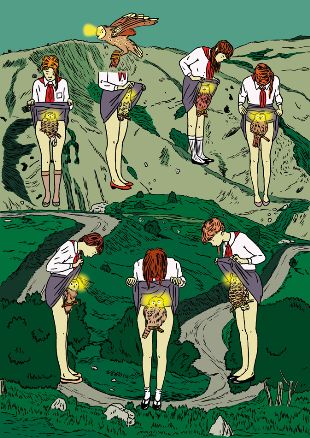 I don’t know what the hell’s going on, but my lips are chapped and my fingertips are dry and rough.  Sometimes my lips go all Krispy Kreme like this, during the winter, but my fingers are freaking me out.  It’s very strange; everything feels unusual to me.  I don’t care for it.

I know you guys will tell me to use lotion on my hands, and Chapstick on my lips, but it ain’t gonna happen.  Once that nonsense gets started, you’re a prisoner.  You start to NEED it, and before long you’re hocking stuff at the pawnshop, and breaking into houses – for balm money.  So, no thank you.  I’ll just ride it out.

Last night I drank a 101 ounce jug of water while I was at work, and my chapped lips seem better today.  I’ll knock back another one tonight, and hopefully all the massive hydration will take care of my sandpaper fingertips.  Weird.  Even this keyboard feels strange.

Since our dryer isn’t working, I went to the laundromat on Friday.  But, to save me from going again in just a few days, I did some excavation work before leaving the house.

I spent a half-hour or so going through my closet, identifying every shirt I could reasonably wear to work.  I get into a cycle where I wear the same ones over and over, while other — perfectly fine — shirts get shoved further down the pole, and out of rotation.  For no good reason.  After a while they just get moved down, because others have moved in.  It’s like Johnny Carson’s couch.

But I wanted to wash as many shirts as possible, so I won’t have to return to that soulless place anytime soon.  They were already clean, of course, but I suspected they needed some freshening up.  Because of a year or more on the pole…

Feeling like I was on to something, I then went upstairs and started going through my socks and underwear.  It was amazing.  It’s like the rings of a tree.  I can actually move through time, inside that drawer.  When I got all the way to the back of the mashed and compacted space, I found a thin vein of tighty-whities and tube socks — clothing from a long-ago era.  I’m thinking about sending it all to the Smithsonian.

If I were to attempt to slip into a pair of those old nasties, the blood flow would likely be cut off, my junk might turn black and detach, and the waistband would hyper-extend until it’s only a centimeter wide, then snap and knock a hole in the drywall.  It’s freaky.  I can’t believe I was ever so skinny, and wore such disturbing undergarments.

Anyway, I now have a mountain of freshened clothes, some of it previously neglected for many months.  It might be enough to see me through until we can get someone in here to fix that stupid dryer.

While I was at the laundromat I noticed a large calendar hanging on the wall.  It featured paintings of all the U.S. presidents, with a big one of Obama in the middle.  Except it didn’t really look like Obama, it was closer to Nipsey Russell following a three day drunk and a fall down some basement stairs.

Then I started looking at the other presidents, and they were horribly rendered, as well.  A few of the early presidents looked like they suffered from Down syndrome, and Ronald Reagan was something along the lines of The Scream in an expensive suit.  What the hell, man?  It made feel ill at ease.

I walked away from the thing, worried those distorted presidents might start visiting me in my sleep.  And I don’t think my heart could handle the mongoloid Martin Van Buren.  Ya know?  Shit!

And speaking of art — or “art” as the case may be — our youngest son turned in a very cool project to his art teacher last week.  I don’t have his authorization to show you a photo of it, but believe me… it’s pretty awesome.  If he doesn’t have a problem with it, I’ll post a picture next time.  I sat and stared at the thing for five minutes, and that’s a long time to stare.

But he received a 60 on it!  Here’s the note from the teacher:

This started out GREAT, then you created your own directions. We grade in middle school by directions + effort, NOT ability. You have a wonderful talent and a great amount of creativity… but here we grade by following directions. Not everyone has your gift of creativity.

So, there you go. He colored outside the lines, so to speak.  What do you think about this?  I’d like to get your opinions.  For the record, I told him I give it a 100, and don’t believe in suppressing a person’s creativity.  He doesn’t seem to care, one way or the other.  Apparently I’ve passed on the “whatever” gene to him.

Let me know what you think about the teacher’s comments.  I understand, kinda-sorta, what she’s saying — but she’s an art teacher.  She, of all people, should be encouraging creative approaches to her assignments.  Right?  Please use the comments link below.

And I heard one of the weirdest things of the past 48 to 72 hours at work last night.  A woman told me that she used to work with a guy who handed out “ass pennies.”  Are you familiar with this?  He supposedly shoves pennies up his butt, leaves them there for ten or twenty seconds (you know, to marinate), then hands them out to co-workers and acquaintances who annoy him.

She swore this was true, and I just stood there blinking real fast.  Ass pennies??  When I got home I did a search for that term, and came up with this.  I have a feeling this co-worker dude didn’t come up with the concept on his own.  But I’d like to think that he really did go around awarding people with his “special” coins.  Unless, of course, I have one in my pocket right now…

Finally, we discussed our most memorable Christmas presents of all time, a few days ago.  Today I’d like to know about the WORST gift you’ve ever received.  If you have a story to tell on that subject, please do so.  I can’t really think of any super-bad presents I’ve received; none stick out in my mind.  But what about you?  Please bring us up to date on it.