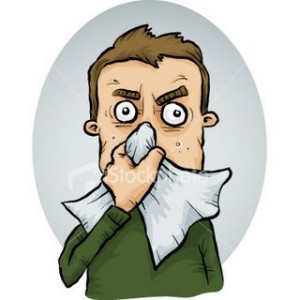 My spring hay fever is kicking up, right on cue.  At the beginning of the season a lot of people start sneezing and hocking and snotting, but I’m perfectly fine.  Then, about two weeks later, after the rest of the world has settled down, I get going.

It’s no fun, but it’ll only last for half a month or so.  By late May it’ll be smoove sailing again.

Everybody always asks if I’m taking anything for it, and that’s completely predictable, as well.  No, I don’t pop pills because of every tiny change in my life.  I see people at work, who are younger than me and seemingly healthy, bust out a goddamn section of Revco racking full of prescription pills on their lunch breaks.  And what the hell, man?  I don’t even take aspirin.  Whatever.

Speaking of aspirin, Toney took our oldest son to the middle school this past weekend, and let him drive her car around the parking lot.  He just turned fifteen.  The thought of him driving a car freaks me out a little.  It feels like he’s still a little kid, even though he’s 6 foot 1.

Toney told me she’d take care of showing him how to drive, because I don’t have the “patience” for it.  Ha!  I’m deeply offended.  Why would you not take advantage of unlimited access to the best driver on the road?  And I was born to mentor.  Everybody knows this.  Of course, I can’t put up with any nonsense…  Or people making decisions that differ, even slightly, with my opinions.  But still.

I’ll show him how to properly merge onto an interstate highway, for instance.  That’s a rare lesson in these parts, I know.  People up here, and nowhere else I’ve ever lived, think you’re supposed to drive out to the end of the entrance ramp, stop, and turn on your blinker.  Then, when there’s an opening, enter the flow of traffic at five mph.  It’s douchetastic!

And I’ll teach him how to never back into a parking space and look like an asshole.  Or hang anything off his rearview mirror, or be seduced by bumper stickers, decals, or any novelty adornments, such as stuffed animals with suction-cups on their feet.

And, most importantly, I’ll tell him how it’s best to EXPECT idiocy from your fellow drivers at all times, and consider it a bonus when no mind-bogglingly stupid shit happens.

Heck, I should start a new business, I really should.  I could do some good in this world.  Smoking Fish Driving School: Making the Roads Safer and Less Infuriating, One Shiny Zitster at a Time.

Have you ever been to a fortune teller, or palm reader, or anything of the sort?  My only encounter was with a man at Venice Beach in California many years ago, who told me I’d be starting a second family during my forties.  I didn’t care for that “reading,” and kept it to myself.  I don’t think I ever told Toney about it, for obvious reasons.

Right now a lot of people I know are going to see a so-called medium, who is supposedly scary-accurate.  She charges twenty bucks per sitting, and everybody raves about her.  Some folks have encouraged me to give it a shot, but I have little interest.  I think it’s almost 100% horseshit, for one thing.  Plus, that guy at Venice Beach kinda messed with my head.  So, no thank you.

But what about you?  Have you sat through a reading by any of these folks?  What happened?  Did any forks come flying out the kitchen, or anything?  Please tell us about it in the comments section below.

And since I was talking about pills, do you take any herbal supplements, or anything of the sort?  Don’t tell us about your prescription meds, ‘cause that’s private.  But do you take anything from GNC, or whatever?  Is it helpful?  Sometimes I hear guests on the George Noory radio show who swear by some obscure herb, and I get mildly interested.  Until I turn off the radio, anyway.

Also, if you have any good “learning to drive” tales to tell, we’d like to hear those as well.

This is going to be my last update of the week, my friends.  I’m going to be turning over my life to the signed books for the next couple of days, and hope to have all of ‘em in the mail by Saturday morning.  So, I’ll see you guys again on Sunday or Monday.