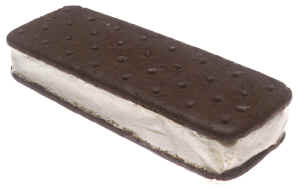 Toney was at Wal-Mart a few days ago, and said two women wearing t-shirts the size of the infield tarp at Wrigley Field were going around scanning items, and adding them to a wedding registry.  …Yes, at Wal-Mart.

And you know how you get behind a person in a store, and keep seeing them the whole time?  Even after you attempt evasive action, to try to break the pattern?  Well, that’s what happened to Toney.

She said the portly pair selected several “sort of understandable” items, but twice she called me laughing and almost hyperventilating.

The first time was when they scanned one of those sponge-on-a-stick deals some people use while washing dishes.  You know, so you can get the milk out of the bottom of the glass?  And how much money would one of those set a person back?  A dollar?  Two?  The woman put it on her wedding registry!

But the second was even better…

Toney swears it’s true, and I believe her.  She said the dumplin’ duo scanned a 12-count box of Wal-Mart brand ice cream sandwiches.

Now, I can almost understand presenting a couple with a box of ice cream sandwiches as a wedding gift, but shouldn’t the newlyweds set their sites a little higher, and go for the Blue Bunny brand, at least?  I mean, you only get married for the third time once.

But who knows?  Maybe they were afraid people might accuse them of putting on airs, and thinking they’re uptown?  Hey, I’m sure they know their guests better than I do…

We’re finally dumping our local monopoly of a phone company.  Longtime readers know we’ve been toying with the idea for several years, but didn’t really like the thought of using cell phones only.  It just didn’t feel right to us…

However, the company we’re forced to use has no direct competition, with the kind of prices you’d expect in such a situation.  Even with our service stripped down to the bare minimum (no caller ID, no voicemail, no nothing), it’s still costing us more than fifty dollars per month.  It’s a HUGE rip-off.

So we’re going to try Vonage.  Our equipment arrived yesterday, and we’re going to hook it up today.  For less than half of what we’re paying the local company, we’ll have unlimited calling and every bell and whistle known to man.

The only downside?  We’re going to have to change our number.  The aforementioned monopoly somehow controls all the telephone numbers in our town, and won’t allow them to be used with other services.  You think I’m joking?  Oh, you’d be mistaken on that count.

So we’re going to have to go with a number associated with some town I’ve never heard of, or visited.  I don’t even know…  Harelip Township?  Mongoloid Ridge?  I’m unclear.

In fact, I might be mistaken about this, but I don’t think our new number is even numbers, completely…  I believe it’s something like 4!3-2@*6.

But it’ll be worth it.  What do I care if our phone number is 4-exclamation mark-three-two-at symbol-asterisk-six?  That’s cool with me.

Any opinions on Vonage?  Are we making a mistake?

I heard a news report a few days ago about swine flu, and they said one of the best ways to avoid catching it is to never touch your face.  I laughed, and thought, “Who goes around touching their face all the time?”

But now that I’m aware of it, I’m starting to realize that I’m apparently a serial face-toucher, myself.  Who knew?  I’m constantly catching myself scratching, poking, flicking, and stroking…

Try it sometime, and you might be surprised.  Try to go for fifteen minutes without touching anything on your face.  Am I the weird one, or do you also find yourself messing around with face stuff more than you realized?  I might have to strap my arms down.

Joe T. sent me a scan of a baseball card this morning that made me chuckle, in a Beavis manner.  Take a look at it here, along with two others I added from the same “team.”

Who else can we include in our little hall of fame?  Help me out, won’t you?  ‘Cause my mind isn’t working properly, on account of the drip, drip, drip of dumbness.

And do you want to see something inexplicably sad?  Well, check this out.  Shane got his teeth fixed!  I can’t believe it.  For some unknown reason this throws my whole universe out of kilter.  Shane MacGowan with perfect (albeit grayish) teef?  I’m not sure I’ll be able to function in such a world…

And I like the sound of this place.  Have any of you visited it?  I think I need to make a pilgrimage in the near future.

The light bulb in my Miller High Life lamp burned out a few days ago, so I added them to the grocery list hanging on the fridge.  And I wrote “none of those stoopid Dairy Queen cone bulbs either, please” beside it, just to be sure.  I can’t have anything “green” in the Surf Report bunker.  I mean, seriously.

So Toney bought regular bulbs from Wal-Mart, but they’re 67 watts.  Have you ever heard of such a thing?  67??  I don’t get it, but have a bad feeling.  It’s something feel-good, isn’t it?

Dammit!  Why can’t they just leave me alone?  At least while I’m inside this tiny room?

And from the Stealing Clive Bull‘s Topics desk…  What are some of the best biographies or autobiographies you’ve read?  Three jump immediately to my mind:  this one, this one, and this one.  All were excellent, and stick with me through the years.  Especially the Raymond Chandler, for some reason…

Do you have anything on this subject?  Tell us about it in the comments.

And speaking of Clive, one of his callers said she graduated from some school (I’m unclear) in the 1950s, and the headmistress gave all the girls some “advice for life.”

1.  Don’t go near Piccadilly Circus
2.  Never drink pink gin
3.  Never touch a man on the back of his neck

WTF?  What kind of advice for life would you offer someone graduating from high school today?  Use the comments section below.

And I think that’s enough for one day…

I hope you guys have a great weekend, and all that stuff.  I might post a “special report” before Monday, but probably not.  I can’t imagine it happening two weeks in a row, but stranger things have happened (I’m told).

See you next time.