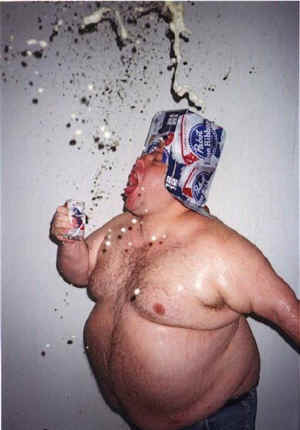 Speaking of McDonald’s… I know a guy (purposely vague) who is friends with an assistant manager at one of their restaurants, and she regularly supplies him with bags of Big Mac sauce.

That’s right, bags.  Apparently they’re designed to be loaded into some sort of condiment-shooting caulk gun, and she gives this guy a couple of the things every two weeks.

“What do you do with them?” I asked.  “Keep one on the console of your car, and take a hit every half-mile or so?”

Over the last year or so people have started using the phrase “Really?” in a different way, and it bothers me a great deal.  It’s hard to explain, but they say or write it as a response to something they think is ridiculous.

I didn’t realize it, because I never watch the show, but this aggravating trend was apparently triggered by Saturday Night Live.  Or are they just mocking it?  I don’t know, but “Really?” is REALLY starting to piss me off, and making me want to start kicking sex organs.

“Good times” is over, too.  I’ve used that one here, but won’t again.  And I’d like to pretend it never happened, if you don’t mind.  “No worries” is on the bubble, as well.  Teetering, ready to become annoying…

What other trendy phrases need to go?  We must keep on top of it.

A few days ago I wrote about how I was accepted into the FBI agent training program, back during a previous lifetime, and mentioned a friend named Tim.  He was in the Army at the time, and was pulled aside and asked questions about me — while stationed in Colorado.

Well, after I published that piece, I received the following email from the very same Tim:

Man, I remember that day.  I’m sure I’ve told you all this before, but you’ve triggered the flashbacks now.

I got orders that I was to report to the C.I.D. the next day, which was like the Army’s version of C.I.A.  At the time, I was working in a job where I dealt with a lot of top secret information, so I assumed I’d done something really bad.

I couldn’t sleep that night, going over in my head what communist I might have accidentally talked to or what paper I forgot to shred.

So I get there looking very guilty. They call me back to this room where one humorless guy was waiting.  I sit down and he lets out an exaggerated exhale and says, “So, do you know a man named Jeff Kay?”

Wow, my jaw hit the ground.  I couldn’t imagine what you had done.  After he said you were an FBI candidate, it was like I was in the Twilight Zone.  Here I was, in a windowless bunker in Colorado, being asked by the FBI if the man who drank more beer and vandalized more property than any human I had ever known, was qualified to preserve and protect the Constitution.

Of course I said yes.  I think I also told him he’d never have to worry about you backing out at the last minute:  “I stake my reputation on it.”

Funny stuff.  Someday I’m going to request my file, through the Freedom of Information Act.  I checked into it once before, and it costs something like a hundred bucks in “processing fees.”  But someday I’m going to do it.  I want to see what they collected on me, especially from my high school teachers(!).

According to the spam-catching plug-in I have installed on this site, 45,736 spam comments have been blocked to date.  Can you believe that?  Forty-five thousand!  Man, that’s a lot of penis enhancement and Rolex-style watches.  Sweet sainted mother.

Also, according to RescueTime, I’m wasting my life away.  They send me little alerts, periodically, to remind me of this fact.  And it’s much appreciated.

I bought the new Eels album on Tuesday, and it’s great, as usual.  It’s a break-up record, so the subject matter isn’t exactly uplifting.  But the songs are solid, and not overly depressing.  A few of the reviewers at Amazon disagree, but what are you gonna do?

This is another album I’m enjoying.  It’s not well-known, but really, really good.  Here’s a glowing review, and I recommend it as well.  There’s some kind of strange magic in that thing.

And speaking of CDs, I was scrolling through my wish list at Amazon a few days ago, and noticed this freakiness.  What in the mop ‘n’ glo hell?  Twelve thousand dollars?!  Last time I looked, you could pick that thing up for about ten bucks.  What happened?  I’m totally confused.

Have you ever heard of Scott Wilk and the Walls?  Well check it out: an ultra-obscure blast from the New Wave era.  The dude released one killer album in 1980, full of great songs, and was quickly dismissed because he sounded EXACTLY like Elvis Costello.

I’d never seen that video until a few days ago, and it’s pretty much the way my hair looked in ’80, as well.  <full body shiver>

I neglected this site for the last four or five months of 2009, while I was writing my “book,” and I’m having fun getting back into it.  The updates this week have been more focused, and I want to keep it going that way.  Except for the topic dumps, of course….  It feels right again.

Last night I installed a plug-in that adds a Retweet button to the end of every update, and I hope you guys will use it.  If you read something you think is sorta funny here, please consider hitting the button and sending it out to the twitterverse.  I’d be much obliged.

I have some ideas for the near future, so stay tuned.  I’m jacked up about TheWVSR again, and think it’s going to be an exciting year.

One thing I’m considering is an attempt at podcasting.  I sounded like hillbilly robotics on those radio pieces I did with Jack Boston, but think I can do better now.  And for the first couple of episodes (is that what they’re called?), I’d like to answer reader questions.

So, if you have any questions about the website, or anything loosely associated with the ridiculousness here, put it in the comments and I’ll try to answer ’em.  Some things are off-limits, of course, but I’ll do my best to give you an answer, from the Surf Report broadcast studio (AKA our dining room table).

Thanks for stopping by every day, and I’ll see you guys next time.