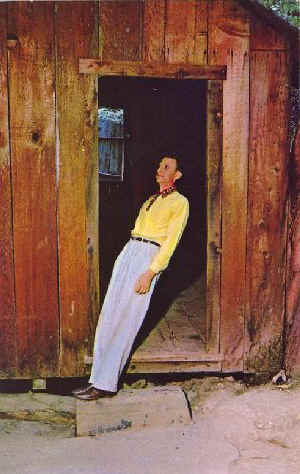 Yeah, I think I’m going to have to ask for a do-over on this homemade haircut…  It’s starting to go slightly mushroom-shaped: narrow at the bottom, with a pronounced widening above the ears.  I’ve got Hiroshima Head, and possibly Nagasaki Neck.

My friend Duff emailed me last night, to alert me to an article about Charles Portis in the New York Times.  Check it out.  Portis is one of my favorite writers, and is almost as reclusive as J.D. Salinger used to be — before he died and took it up another notch.

The cool thing about the article is that the reporter went to Arkansas and actually had a couple of beers with the author.  Man… I’d give my left penis (is that the correct phrase?  it feels a bit off) for a chance to spend an hour in a barroom with Charles Portis.  It would be like drinking with Moses or Lincoln, or something.

Portis wrote True Grit, which was turned into a John Wayne movie and has been remade by the Coen Brothers, but also wrote two of the funniest novels I’ve ever read:  Norwood and The Dog of the South.  Both have similar premises, and are equally hilarious.

What are the funniest books you’ve ever read?  Fiction or non-fiction, it doesn’t matter.  Tell us about it in the comments, won’t you?

Toney and I are going Christmas shopping this evening.  It’s the only night I’m not working, so we’re going to Sam’s and a couple of other nearby places to exchange cash for merchandise.  We’re in slight disagreement about a gift we’ll be buying for the younger Secret, but I’m right.  I’m not always right, mind you, but I am this time.

Have you finished your shopping?  I haven’t, and my obligations are minimal.  Toney handles 90% of it, and I haven’t taken care of ANY of the remaining 10%.  And I’ll be no closer after tonight, either… because tonight falls into the 90% category, if you follow me.

A quick reminder:  Please use our Amazon links, while doing your holiday shopping.  It costs you nothing extra, and I’ll earn a small percentage of whatever you spend.  It’s a painless way to support the Surf Report.  And I thank you.

You know what pisses me off?  All the albums on my Big iPod that go into the Various Artists catch-all folder, for no good reason.

Like this XTC best-of I’m playing right now…  If you look up XTC by artist, it shows nothing.  But if you look for the album by name, in Various Artists, there it is.  What the hell, man?  Same goes for this Galaxie 500 compilation.  There’s nothing under the artist name, you have to remember the album’s title every time.

Yeah, I know I can go in there and play around with the information, and fix the problem by hand.  But who has time for that kind of boolshit?  I don’t.  It’s supposed to work automatically (and does most of the time).  I shouldn’t have to hack code ‘n’ shit.  And it’s not always compilations, either.  The second Luna album, Bewitched, is also listed as Various Artists.

It’s raising my blood pressure, just thinking about it.  Various artists my big riffled ass.  It’s not various, it’s one very specific artist on each album.  Grrr…  I realize a survivor of Auschwitz, or whatever, might not view this as a major aggravation.  But I’ve never been to Auschwitz dammit, and I want my songs to be properly organized!

Yeah, and wonder why this video clip just popped into my head?

My brother texted me this morning, and told me he found a $100 bill outside his bank.  He pocketed it, as I would’ve.  However, I would feel guilty about it.  I would envision some little old lady withdrawing money, so she could include it inside a Christmas card to her deaf grandchild.

And I’d feel a little bad about it as I purchased a Saranac sampler at the beer store, and would try to replace those heartrending thoughts with an image of some asshole drug dealer in a wife-beater and Florida Marlins cap, waving his arms around like a douchesack and spilling money all over the streets.

And I need to stop right here.  Toney will be home in a few minutes, so I’d better hoist my heft off this chair.  I probably won’t update tomorrow, but everything’s subject to change.

I’ll see you guys next time, whenever it happens to be.