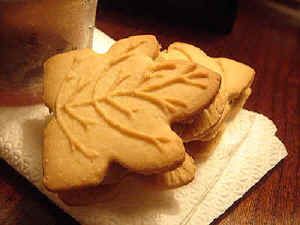 There’s a hole-in-the-wall Chinese place that recently opened near our house.  It’s actually within walking distance of us, but I’ve never walked.  I mean, seriously.

But the food is excellent (not gloopy at all), and cheap ($5.35 with tax for their lunch specials), and plentiful (I gave Andy the last two pieces of my lemon chicken a few minutes ago, ’cause I couldn’t eat it all).

And as I was sitting in there waiting for my order, I could hear all the employees talking to each other in Chinese.  They’re straight off the mainland, I think.

While listening to that most baffling of languages, I started thinking about one of Phil Hendrie‘s characters, who said Chinese sounds like a dropped fork.  And I know it’s horrible of me, but I’m still laughing.

A few nights ago at work a fairly-new supervisor in another department asked if I could spare one of my “people” for about fifteen minutes after lunch.

“Thanks Jerry!” he answered.

And a woman who sits near me at my job sometimes plays an oldies radio station (at a too-high volume, I might add).  It’s the normal oldies stuff:  “Under the Boardwalk,” “Big Girls Don’t Cry,” “Jailhouse Rock.”  But every once in a while they’ll throw in something that seems a tad… askew.

Like “Strawberry Fields” for instance.  That doesn’t belong on oldies radio, ya know?  That’s classic rock.  There are rules in this universe…

Indeed, a few nights ago they took it even further.  So far, in fact, it shook me up a little.  Right alongside “Hello Mary Lou,” they played (are you ready for this?)… “Jump” by Van Halen.

And I believe it ripped a small hole in the space/time continuum.

I’m returning to the yurt on May 12 & 13.  I think I can log upwards of 24 hours of uninterrupted writing/editing time on those two days, if I’m disciplined.  Then I’m planning to take a week off from work sometime in June, to finish the book.

I don’t know exactly what the phrase means, but it’s nut-cutting time with my “novel.”  I have to focus and get it done.  I told Mr. Big, face to face, I’d have it to him in June.

And since we’re on the subject…  Last night after work, around 2:30 am, I cracked open a Yuengling to celebrate another week ended.  My long weekend had officially begun.

Then I started eating salted peanuts in the shell.  But I didn’t get a bowl of them, I was just standing in the kitchen and taking them straight out of the bag, then tossing the shells into the trashcan.  And around peanut #7, I sucked one of the reddish skins down “the wrong way.”

I could feel it in there, attached to the wall of my throat, fluttering with every breath I took.  And I started gagging and coughing, and almost screaming into the darkness.

I couldn’t breathe, and panic was starting to set-in.  I gulped down a glass of water, but the skin would not dislodge.  Tears were rolling down my face, and I was making all sorts of surprising noises.

Then everything settled down, my breathing stabilized, and I was able to continue with my beer.

And when I got up this morning there was a text message from Toney on my phone (this is how we communicate).  It said, “Were you puking last night, or what?  I think you woke up half the neighborhood.”

I guess she doesn’t think it’s necessary to get up and check on me, until she hears my body hit the floor?  Is that the action-trigger at this point?  My lifeless torso slapping the linoleum?  I’ll have to text her, and find out.

Have you ever had Canadian maple cream cookies?  A friendly woman at work insisted I try one, saying they’re the best things ever, and I almost yakked.  It was disgusting; it tasted like a tightly compressed pancake breakfast.  And while that might seem appealing in the abstract, it ain’t.  Not to me, anyway.

I smiled like an idiot, lifted the partially-eaten cookie to signify my approval, then wandered off and threw the awful thing into a recycling bin.

What’s the worst cookie you’ve ever tasted?  I know there aren’t too many awful cookies, but there are a few.  Oh yes there are.

And I’m gonna call it a day, my friends.  I’ll leave you now with a question from the Stealing Clive Bull‘s Topics desk.

In the comments section, please tell us if you’ve ever paid more than a hundred dollars for a ticket to a sporting event, concert, Broadway play, or anything of the sort.  I’m talking about one-night (or day) events, not a cruise, or something like that.

If so, tell us about it.  Also, was it worth it?  I don’t think I’ve ever paid that much.  My closest is probably the seventy-five bucks I plunked down for Steely Dan a couple years ago.