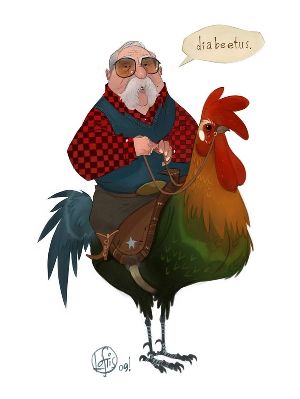 My first week back at work is now in the books, and I’m free until Sunday afternoon again. I love the first day of freedom, it kicks massive ass.  Also, it feels an awful lot like Bourbon Season outside…  And this is my favorite time of year.

The calendar says we’re a little early for Bourbon Season, and I’ll probably hold off for a while, but nothing is cast in stone with it.  You’re free to adapt it to your own needs.  The official kick-off to the season is Halloween night, and it continues through New Years Eve.  But make of it what you will.

We usually start with a bottle of Maker’s Mark.  Do you have any additional suggestions for me?  I’m no expert on whiskey, I just like it sometimes.  If you have a tip for something reasonable (not $500 per bottle), I’m all ears.  Or eyes, or whatever.

We had to replace our microwave, after the old one shit the proverbial bed.  And it’s messing me up, man.  I knew the other one well, but this is a completely different breed of cat.  All the numbers I had stored inside my head must now be discarded, and a new file created.

For instance, I love the Mary Chapin Carpenter frozen meals, especially their sweet & sour chicken — it’s shockingly good.  And I know the numbers to cook one of those babies, as well as I know my own birthday:  three minutes, stir, three more minutes, and five minutes to cool.  Then:  perfection.

But now it’s all thrown into disarray.  The first time I used the old numbers, I bit into a hunk of chicken and it was full of ice crystals.  So, I stuck it back in for a while, and it came out kinda rubbery and gross.  A dark sadness overtook me…

I’ve experimented with it, and come close to the old glory.  But it’s still not exactly right.  And I’m going to have to do this with everything I cook in that stoopid machine.  I just want to have a quick lunch, not run a goddamn research laboratory.  I’m a very busy and hungry man.

I can’t stop listening to this Mitch Easter solo album.  I mentioned it when I downloaded it, a couple of weeks ago, and I’m totally hooked.  It was released in 2007, but I didn’t know anything about it until recently.  If you liked Let’s Active, and wish they’d released a fourth album, you should check this thing out.  It’s solid, and habit-forming.

If you have a smartphone (please don’t get up on your high horse if you don’t… sheesh), have you discovered any interesting apps recently?

I downloaded one called Untappd, which is supposed to be a social networking thing for beer snobs.  I haven’t really used it yet, but I think the concept is that you log an instant review, and drinking location, every time you try a new beer.  You can also use it to look up other peoples’ reviews of obscure beers, if you’re considering buying a six-pack, or pint, or whatever.

Have you come across any especially useful or fun apps recently?  Tell us about it in the comments.  I try many of them, and eventually discard most.  I’m very hard to please when it comes to phone apps.  Most of them annoy me, bore me, or both.

And speaking of beer snobbery, this past Saturday Toney and I went to the yuppie bar for a cuppa two tree pints.  Both boys were out with friends in the late afternoon, so we took the opportunity to visit a public house.

It was a beautiful fall day, warm enough to sit outside, but not anywhere near hot.  So, we took a seat at one of the drinking stations in the yard (it’s a strange place), and the waiter brought us a list of their draft beers.  And I was pleasantly surprised…

In the past their beer selection was pretty boring, but it’s gotten better.  They tried to be cool, but someone didn’t know what they were doing.  Magic Hat #9 is NOT adventurous and exotic.  But now it’s much improved, and I enjoyed two pints of Stone IPA.  There were two or three other beers that made me go “wow!” as well.  It’s a decent line-up now, and that’s never been the case.  Not ever.

For a few days last month I actually considered trying to buy a local bar of my own, if you can believe it.  Oh, it’s true that I have no money or know-how, but for some reason those facts just seemed like minor inconveniences at the time.  Good ideas and enthusiasm is all that matters!  I said that phrase out loud, multiple times.

Then I started receiving loan applications, and various other official-looking forms, and stepped back from the brink.  I’m not afraid to take a risk, but this didn’t seem like a wise one.  Maybe someday in the future, with a partner who has a background in restaurant management, or something…

I think I could give the people what they want, and would call it the Smoking Fish Tavern (of course), but it would be fairly foolish to jump into something like that with no experience.  That’s assuming I could even secure a loan.

But anyway…  I’m always working on crazy shit inside my brain.  Most of it never comes to fruition.  I sometimes worry that I’m a real-life Ralph Kramden, always cooking up the ridiculous schemes and casting a stout shadow.  Oh well.

I have a few other odds and ends in the ol’ notebook, but I’m getting tired.  I asked a couple of Questions above, and would also like to know if you’ve ever taken a giant leap of faith, like my bar idea?  Also, were you ever right up to the brink with something like that, pulled back, and regretted it?  Please tell us about it, won’t you?

I have a friend who recently left his high-paying job, because it was driving him crazy, and is now pursuing other things.  He’s married, with kids and a mortgage.  I admire his courage, and wonder if I would have had enough of it to quit the way he did.  And, of course, the answer is no.  That’s not my style.  I work on stuff during my downtime, and try to improve my situation as time permits.  It’s the safe route, and I’m not completely proud of it.

In any case, if you have any stories about making a big dramatic and risky change in your life, we’d like to hear it.

And I’ll be back next time, whenever that turns out to be.  Probably Monday, but maybe Sunday.