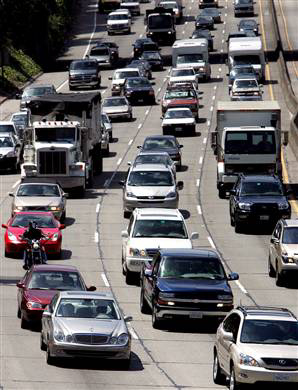 For better or worse, I’ve lived and worked in quite a few cities and towns during my ridiculous life.  And I’ve experienced the full spectrum of morning commutes.  I’ve been within walking distance a couple of times, and also lived an outrageous number of miles from the office.  And everything in between.

My shortest “commute” was in Dunbar, when I was but an ugly teenager.  For a couple of years I worked as a stocker at a grocery store called Fas-Chek (wotta dump), which was within rock-throwing distance of our backyard.  I know, because I used to throw rocks at it.  Heh.  Unless it was raining, I walked to work every day.

In Greensboro I had an apartment that was technically within walking distance of Peaches Records, but I always drove.  It was probably a mile, give or take, and my cassette deck only had enough time to play half-a-song, until I was parked and hoofing it into the store.

My worst commute was in Atlanta, by far.  Toney and I lived together in Little Five Points, the hipster bohemian area of town, but when we started to talk about marriage… we got intrigued with the idea of buying a house.

One day, and I don’t remember how we ended up there, we were in Stone Mountain, checking out a model home inside the main gate of a new housing development.  It was WAAAY too far from work, but we went to the open house, anyway.

And we loved it, of course.  Our emotions got the better of us, and we began rationalizing the crazy-ass drive we’d have to endure every morning and evening.  It was insane, but we eventually justified it to ourselves.  Oh, we’re masters at that.

It was probably forty miles, but the first five were the worst.  It often took longer to drive the five miles or so to the interstate, than it did to complete the last thirty-five miles of the journey.  The traffic was like nothing I’ve ever seen.  It’s a wonder my brain stem didn’t catch fire, or something.  I was stressed into the red zone, almost every day.

But once I get moving… I don’t really mind driving long distances to and from work.  It’s alone time with my choice of music, and what’s so horrible about that?  I just can’t take sitting in traffic.  It makes me insane.

The other bad commute was Los Angeles, of course.  It was another forty mile trek, but nearly all interstate.  I almost literally didn’t know what to expect each day.  It could take me thirty minutes, or two hours.  It frequently sucked, but not always.  Atlanta was much worse, because of its sucking consistency.

Here (and I’m noticing a pattern) I also drive about forty miles to work.  My original job was a lot closer, but that was during a different lifetime.  And similar to L.A., I don’t really know what to expect each day.  But it’s not because of the number of cars here, but the constant, never-ceasing road work.  I-81 South will likely be the cause of my aggravation-triggered death one day.  That’s my current prediction.

So, what’s been your best and worst commutes, to date?  And how do you amuse yourself if you’ve got an extra-long journey?  Audio books?  A favorite radio station?  CB radio (good buddy)?  How do you pass the time, driving to and from work?

And also… please help us out with a questionable exercise at Mockable.  Right here.

I’ll see you guys tomorrow.  I need to drive forty miles again, so if you’ll excuse me…