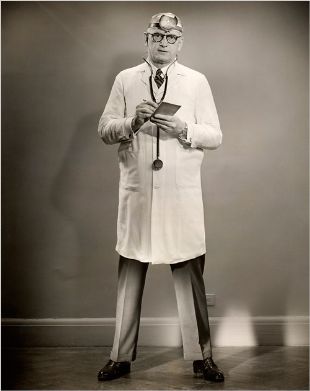 Yesterday I had my follow-up appointment with the doctor, to discuss the results of my blood work.  Here’s part of a text conversation I had with Toney, while I was sitting in the main waiting room with nervous sweat rolling down the center of my back.

Toney:  Are u there?

Toney:  I know!  Some of them bring their own nurses with them.

Me:  And somebody doesn’t smell too good in here.

Me:  I’m probably breathing in cancer.

Me:  I bet he’s back there lubing up a fist, right now.

But, to my utter surprise, everything’s fine.  They tested my blood and (mid-stream) urine for a ridiculously long list of things, and there wasn’t a single problem in any category.  Whew!  I don’t understand how it’s possible, but whew!

My blood pressure was also down significantly from last time.  I took the doc’s advice and cut down on salt and soda — I’ve stopped eating Marlene Collateral frozen meals altogether — and my BP was a lot closer to normal than it’s been for a while.

However, he said the bottom number is still a bit elevated and he wants me to go on a very low-dose pill for a while, and try to lose 20 or 25 pounds.  If I shed the weight, he says, I’ll almost certainly be able to come off the meds.

At the end he added, “You’re doing great, for a 49 year old man.”  That sounded good, and I liked hearing it.  But as I was driving home… I started turning it over in my head.

For an old man, you’re doing well.  Not for a young guy, mind you, but for a person of your advanced age… not bad.  Is that what he meant?  I think so.

Also:  49?!  Holy shit!!  How is that EVEN possible?  I was 26 a couple of years ago.  And I feel exactly the same as I did then.  Oh, I probably understand the world a little better, and my life experiences have caused me to look at things a bit differently — possibly with more maturity.

But I still think insensitive thoughts all day long, laugh at stuff society says you’re not supposed to laugh at, and just generally approach things like I did when I was an ugly youngster.  Back then I thought a 49 year old man would be seasoned and reasonable, and would walk around thinking about pipe tobacco and cardigans.

Yet I’m still the same dumbass as I ever was.  My earthly container just keeps getting bigger, and my hair is turning gray.  Other than that… same dipshit with the same disgraceful visions dancing around inside his head.

I’m massively relieved, though.  I’m not sure if I mentioned it, but I’m not a fan of medical tests and that sort of thing.  I probably never said anything about it…  But I feel like a million pound weight has been removed from my shoulders.  Now I’m going to try to drop 25.  I really want to do it, and make this prescription nonsense a short-lived affair.

For a Question, maybe you guys can talk about how you’ve changed since the age of 26.  You know, assuming you’re older than that.  I’m serious, I’ve changed very little.  For better or worse…  How about you?

See you guys again tomorrow, or Thursday.  Wednesdays are tough, but I’ll try.

Now playing in the bunker
Buy Jeff a beer, a celebratory beer!