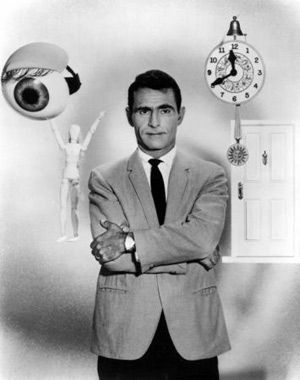 Have you ever been so tired you felt like you might puke?  That’s the way it was for me, yesterday.  I was asked to provide “support” for day shift on Thursday, and it almost cooled me.

The problem, you see, is that I worked until 1:30 on Wednesday night/Thursday morning, slept for about three hours, and was right back in there.  And since day shift is so short-handed at the moment, I had to get down in the trenches and work.  I couldn’t just stand around with a knowing expression, and offer “suggestions.”

It was surreal.  I was having some kind of weird out-of-body experience.  I was there, working, but it didn’t feel real.  And since I’m never there during the day, literally never, I didn’t know anyone.  I was in a place that couldn’t be any more familiar, yet all the people there were strangers.

All of it had a pronounced Rod Serling feel to it.  And when I was preparing to leave, my boss thanked me and I told her I probably wouldn’t remember any of it.  And it’s true.  It doesn’t feel like it actually happened.  It seems more like a dream than reality.

While driving home I got stuck in a construction zone-fueled traffic jam on Interstate 81, and started nodding off while I waited.  It was like Sid and Nancy for a few minutes, and I had to roll down the windows and turn up some Thin Lizzy, to stave off a full nod-out.

I stopped at McDonald’s for a $2 Filet-O-Fish, ate it at my dining room table, and promptly fell asleep on the couch.  I wanted to try to write an update, since I’ve been AWOL again, but I would’ve just sat in front of the computer drooling into the keyboard.

Toney woke me up for dinner, and we tried to watch something on TV afterward.  But I was out again.  Just sleeping like a sumbitch.  Around ten I summoned enough energy to drag my big ass upstairs, and went to bed.  And I snoozed straight through until 9 a.m.

Tonight we’re going to see Elton John in Wilkes-Barre.  Should be fun.  I love Elton’s ’70s material, and he apparently performs a lot of that stuff.  I’m looking forward to it.

The boys are going with us, and it’ll be interesting to get their perspective.  They’re familiar with the greatest hits, since I like to play those CDs on long car trips, so they might like it.  We’ll see how it goes.

The books arrived yesterday, the ones I’m going to sign and send to you folks who ordered personalized copies.  The cartons are piled up in our living room, and I’ll get into them, as soon as possible.  It’s a little intimidating, and I get a queasy feeling in my stomach every time I walk past the mountain.  But I’ll get ’em done.  It’ll probably be fun, once I get started.  And the Yuengling will help, of course.

Also, Crossroads Road is now available in the Kindle Store in Germany.  Amazon sent me an email yesterday, informing me of this fact.  Weird, huh?  I’m picturing a blonde-haired woman with pigtails, seated in front of a giant mug of beer, reading about Sunshine.  I like it!

Finally, someone at work told me a story earlier in the week, about a “big fat man” he encountered outside a convenience store.  He said the dude was sitting in a car with the window rolled down, and when he walked past he smelled a thick stew of “shit, piss, and body odor.”

And as he continued with the tale, he started gagging, just thinking about it.  I was laughing my ass off.  He wasn’t playing it up, he was genuinely disgusted anew.  I thought he might puke, which I enjoyed a great deal.

For a Question, I’d like to know about the worst thing you’ve ever smelled.  Is there one experience that jumps straight to the top of the list?  If so, we need to know all the details.

And if you don’t have anything on powerful funks… how about the times you’ve been so tired you were nearly sick?  What was it all about?  Use the comments link below.

I’ll see you guys again next time.  Sorry for these absences… Believe me, it bugs the crap out of me. I hate to miss a weekday, and two makes me nuts.  But hopefully we’re back on track.