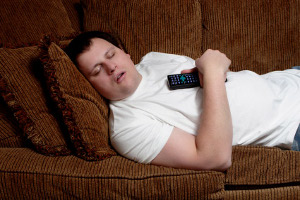 The younger boy woke me up this morning at 11:15. Toney decided I’d had enough sleep for one night, and sent him upstairs to shake me awake. I’d been hitting the snooze button since 9:30. Wotta lazy sack.

I groaned, rolled over, and expelled a cubic yard of intestinal gas. The change in position apparently set a giant bubble into motion, and almost led to the comforter flying down the hall. After I peed for a long, long time, I went downstairs, poured myself a cup of coffee, and talked with Toney for a half-hour.

And before I knew it… I was outside mowing the lawn. I think back on it, and sincerely can’t remember the unlikely series of events that led to me mowing before I was fully conscious. What the hell, man??

I haven’t mowed much this summer, because I’ve successfully pawned that horrible job off on the Secrets. They don’t do a spectacular job of it, but it looked good enough for me. I didn’t do a very good job when I was their age, either. I could always see my dad’s jaw working as he inspected my handiwork, and fought the urge to criticize.

Anyway… I hadn’t been out there for more than a month. And it was worse than I knew.

Our property isn’t level, and there’s a section of it that’s nothing short of treacherous. I’ve fallen down out there, on multiple occasions, and almost had an arm or leg run over by the mower. It sucks, and I’ll be the first to admit it. However… they just didn’t mow it. That’s how they dealt with the problem: they avoided it. It looked like Vietnam!

This is a small section of our yard that can’t be seen from a window or the deck. I hadn’t walked around out there, and had no idea they’d just let it go full-‘nam. I was hollering profanities, and the mower cut-out three times while I tried to bring it back under control. Eventually I got it mowed, but it doesn’t look very good. It’s like a hay field at this point.

Then there was this: a bottle of Vitamin Water in our back yard – which had clearly been mowed around. The last person had just maneuvered past it, instead of reaching down and picking it up. Oh, this was half-assery that surpassed even my own spectacular half-assery of the 1970s.

Once I was finished, and was horrified to see giant sweat stains circling my mannery glands, I called the boys into the living room. Yeah, and they said they hadn’t been mowing that little section of the yard because “you can’t get to it.” “I just mowed it!” I hollered, and they shrugged and said they weren’t able to do it. I could feel my temples starting to throb.

And, of course, neither of them had any knowledge of the Vitamin Water bottle.

I don’t know… I don’t want to force them to mow that radical slope; if something were to happen I’d feel horrible. But a quick, “Hey Dad, we weren’t able to get the side of the house” would’ve been nice. They’d told me, every time, they’d mowed the WHOLE yard. Grrr…

When I was a kid we had a neighbor who would let his grass grow for weeks on end, finally go out there to mow, and get about halfway into the process and say fukkit. He’d just turn off the lawnmower and go back into the house. So, there would be a few strips of regular lawn, a mower, and knee-high grass in front of it.

And he’d just leave it out there for a few more weeks – through rain storms and whatever happened. He was all the time buying new mowers, because they’d rust-out and stop running. He went through two or three every summer.

So… whenever I feel like we’re not taking proper care of our yard, I worry that I’m being as lazy as our old neighbor — the laziest person I’ve ever met. In fact, his face was dancing in my head today, as I shoved the mower up and down the side of that freakin’ mountain.

And I’m pretty sure he winked at me, conspiratorially.

The lazy neighbor was a nice guy, everybody liked him, but he was… you know, super-lazy. And he haunts me to this day. I feel like I’m trying to outrun him, but he almost catches up every once in a while. So, I have to let-loose with an extra burst of energy to put some distance between us.

Who’s the laziest person you’ve ever met? What’s the laziest, most half-assed thing you’ve ever encountered? And do you have someone from your past who unknowingly taught you a lasting “don’t do it this way” life lesson? Please tell us about it in the comments section below.