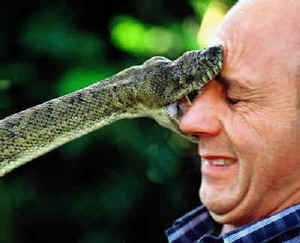 This might come as a shock to some of you, but I have more than my fair share of phobias.  Oh, I’m not a complete basket case like Nostrildamus; I’ve never called Toney during a rainstorm and asked her to bring clean underwear and ointment to an interstate underpass, where I’ll be curled up in a ball, smeared in feces, and repeatedly muttering dialog from Pirates of the Caribbean.

But there are plenty of things that give me the heebie-jeebies.  Plenty of them.  And today I’ll tell you about the main ones, and turn it over to you guys.  How’s that sound?  Let’s get started, shall we?

Doctors/Dentists When I was a kid and young teenager, I’d practically hyperventilate on “dentist day.”

We went to an old man named Dr. Jarrett in Charleston, and his office was located inside an ancient building with a ridiculous Laurel and Hardy-era elevator.  It didn’t really have a door, just a screeching, retractable cage-wall that kept passengers from falling out.

And mister, there was nothing more terrifying than going up in that rickety box, seeing the bricks go past, and knowing I’d be in The Chair within minutes.  Beads of sweat would be cascading down the middle of my back.

When I was finally inside the sanctum, I’d throw a death-grip on the armrests and try to think about baseball cards.  Then Dr. Jarrett would get that drill fired-up, there would be smoke(!?), and I’d maintain a full-body flex until he finally whipped-away the drool bib.

Doctors are only slightly less frightening, although I don’t like them, either.  I’m always convinced they’ll find something horrible, like a tumor the size of a fourth grader, and I’ll be plunged into a world of invasive tests and mysterious procedures.  Each, of course, culminating with a full-sized Coleman camping lantern being twisted into my unforgiving “cavity.”

Eye doctors don’t freak me out as much, but I’m still a little on-edge when I visit one.  They can see things in your eyes, you know.  Hidden illnesses, voodoo curses, and bad stuff you don’t wanna know about…

Generally speaking: not a fan of the medical.

Heights I remember being at a so-called natural bridge somewhere in Kentucky, when I was a kid.  I know there’s a popular natural bridge in Virginia, but this one was in Kentucky.  And it scared the au jus out of me.

It seemed to be way up in the air, possibly touching the bottom of the clouds, and they allowed people to walk across it – with no handrails or anything to stop you from hurtling over the edge.  Here it is.  I got out into the middle of that thing, and nearly had a panic attack.

These are strangers standing near the edge, and just looking at it makes me nervous.

All my life I’ve been afraid of heights, but only if I feel unprotected.  Flying in an airplane doesn’t bother me, and neither does riding a roller coaster.  But I don’t care for being near the top of a stepladder.  Weird, huh?

Even when I see it happening on TV, it makes me feel weird in the scrotal region.  And that’s not a joke.  Hopefully somebody can back me up on this?  I get a strange sensation down there, and it’s not at all pleasant.

Just a few days ago our oldest son was playing a video game, and his character was climbing along an outside ledge of a building, several stories above the street.  And I had to leave the room.  It seems ridiculous, but I felt a bolt of panic go through my body when the character looked down.

No thank you.  I realize it’s just animation, but I nearly vomited into the magazine rack.

Public speaking I hate to be the center of attention, I really do.  Oh, I can publish these updates from my secret room, but I’d have a difficult time reading them to a group of ten or twelve people.  Because all eyes would be on me.

I’ve gotten a little better since I started my “new” job (over two years ago), because I’m now required to stand in front of the department and conduct occasional meetings.  Somehow I’ve grown semi-accustomed to it, and don’t get nearly as nervous.

In the early days I’d lie awake the night before, worrying.  Then I’d arrive at work with bags under my eyes, and hold the meeting looking like a pudgy Alice Cooper, with trashcan lid-sized sweat stains.

So, I’m slightly improved.  Improved, but nowhere near cured.  Maybe if I went to a two-week speaking camp where I was forced to talk to a roomful of doctors and dentists on top of a natural bridge every day…?

Spiders/snakes When we lived in California our garage was lousy with black widow spiders.  And so was everybody else’s.  The old-time Cali veterans told us it was something we’d just had to live with, but I wasn’t having any of that nonsense.

I went out there with a D-Con hydrogen bomb, detonated it, and returned the next day.  And those indestructible sacks o’ poison were practically laughing in my face.  You can’t kill them, unless you step on each individually and grind your foot back and forth like you’re putting out a cig.

So, every time I went into that garage I was convinced an eight-legged death-pouch would fall from the ceiling, bite my neck like a vampire, and put me into instant cardiac arrest.  Paradise!

And when I was a kid I spent a couple of days way out in the country somewhere, staying at a friend’s grandparents’ house.  And it was like something out of a screaming nightmare.

I remember walking through a field, and hearing the grass move every few feet.  I saw two HUGE black snakes slithering up the side of an outbuilding.  And when we went out on the river in a little rowboat, snakes were swimming in the water all around us.  And I swear it’s true, they were also hanging from the trees like Spanish moss.  Hanging from the trees!

In case the permanent psychological scarring wasn’t quite deep enough, we were also treated to a real-life scene straight out of a Flannery O’Connor novel.

One afternoon we heard a lot of frantic chirping, the sound of birds freaking out, and noticed a big, shiny black snake curled around the pole of a birdhouse that was WAY up in the air.  The snake was slowly inching its way upward, and the birdhouse was apparently full of baby birds that couldn’t fly.

Oh my god!  This visit just kept getting better and better…  We couldn’t do anything, besides stand there and watch the complete slaughter of these helpless chicks.  It was gut-wrenching.

Then, from somewhere nearby:  BOOM!  It was a shotgun blast, courtesy of my friend’s grandfather.  And the snake, now headless, fell to the ground — but still wrapped around the pole.

And I just stood there blinking real fast for the next three minutes or so, trying to process what had just happened before me.

So yeah, spiders and snakes are not my favorites either.  I’m not irrationally afraid of them, like I am with heights, but they definitely fall under the heebie-jeebie heading.

Apparently my so-called phobias are fairly standard? According to this, all appear in the top 10 most common.  I’m kinda disappointed, if you want to know the truth.  I’d like to think I’d be more of a neuroses trailblazer.  Oh well.

Now it’s your turn.  Use the comments link below to confess your personal phobias.  Are you afraid of flying?  Thunderstorms?  Lesbian dwarves?  Tell us all about it, won’t you?