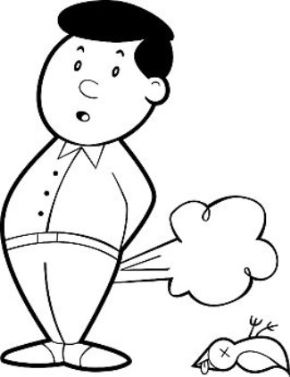 Many years ago I was driving on Interstate 64, between Dunbar and Charleston, and my girlfriend at the time suddenly leaned to one side and unleashed Satan himself into the cab of my Luv truck.  It was a confusing turn of events, because she’d never farted in front of me before.  But on this day, for whatever reason, she tilted toward the window and put her entire abdomen behind it.

The stink was almost instant, and as pungent as anything I’d ever experienced.  It had a real kick: possibly cauliflower-based.  Tears LEAPED from my eyes, and my esophagus began to spasm.  “What the hell??” I hollered.  I couldn’t believe it, and she was over there just laughing and laughing and laughing.

I tried to play it off, like it was a funny joke.  But I was disgusted, fully and completely.  There’s an old Eddie Murphy standup bit, in which he claims we all secretly want to smell each others’ farts.  And maybe I’m the weird one, but I don’t fall under (or anywhere near) Eddie’s ass-sniffing umbrella.  I especially don’t want to get a lungful of my girlfriend’s shit mist.  I mean, seriously.

But, of course, I was a gigantic hypocrite, because I farted with impunity in front of all my girlfriends through the years.  Until I met Toney, that is.  For some reason I’ve attempted to maintain a pucker in her presence.  Occasionally something will go awry, and the seal will be broken.  But I don’t walk around the house brazenly blasting ass anymore, and making the trucker air horn motion with my right hand.

My kids are a different story, though…  They’re boys, and farting is part of boy culture.  So, if their mother isn’t home, all bets are off.  Sometimes it sounds like Normandy Beach in here.

I dated another girl — lived with her, in fact — who would let ’em rip whenever she wanted.  But for some reason it was easier to take with her.  She had a farter’s personality, if you know what I mean.  She was very plainspoken, and didn’t give a single dingle what people thought of her.  She routinely told people to fuck off in public, so when she tilted to one side on our couch, it was just a logical extension of her, um, essence.

My dad lets ’em fly in front of my mother, but she certainly doesn’t fire back.  And maybe that’s why I’m so conflicted on the subject of female butt-trumpeting?  I know it’s not fair, but I’m not really a fan of it.  Generally speaking.  Maybe if my mom was more like my dad, and had used the wooden dining room chairs as an acoustic catapult, I wouldn’t have this low-wattage hang-up today?  It’s hard to know.

And I realize this one isn’t lengthy, but I laughed a few times while writing it.  So, that might be a good sign.  In the comments section, please bring us up to date on your feelings about flatulent friends and loved ones.  Do you have any feelings on this subject, one way or the other?  Is it every sphincter for himself at your house, or do you try to maintain some rectal decorum?  Tell us about it, won’t you?