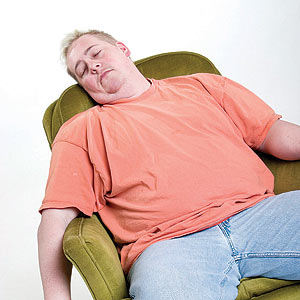 What’s your take on naps?  I’m strongly opposed to them… especially for men.  Is that crazy?  Possibly, but it seems kinda ball-baby bitch for a grown man to take a nap in the middle of the day.  Suck it up, sissy, and maintain consciousness for a few hours in a row.  I’m sure you can do it, if you tap some inner-strength.  Sweet sainted mother of Harold Hecuba.

Nostrils naps, of course, and that might be the source of some of my feelings on the matter.  He’s all the time “exhausted” and in need of “a short rest.”  He’s been known to get all the way into our bed — under the covers!  What kind of weirdo does such a thing??  I’m getting all fired-up just thinking about it.

He also has a fifty mile commute to his job, and nearly drives his dandelion-powered car into a bridge abutment during each trip.  And after he arrives, we’re told, he goes straight to his office, locks the door, and sleeps on the floor for a couple of hours.  You know, to recover from the harrowing journey he’s just endured.

And, of course, he also shit himself during one of his first encounters with a southern rainstorm, and Nancy had to take him “fresh” underwear and a tube of ointment.  But that doesn’t really have anything to do with napping, does it?  I’m getting a little sidetracked here…

In any case, I slept for three hours on Saturday.  I was so tired I felt almost sick, so I went upstairs, got into bed, and clear-cut virgin growth cypress for a long, long time.  I closed the bedroom door, turned the air conditioner on high, and just snoozed on through the afternoon.  Man, it hit the spot…

But when I woke up I felt a great sense of shame.  I climbed off the platform, plucked a square foot of cotton from my crack, and began cussing myself out.  Oh, I gave myself a good thrashing, which is something I deserve on a regular basis.  I wish I could shoe myself in the nuts.

I felt great, though.  Physically speaking…  It was nothing short of fantastic, if you want to know the ugly truth.  However, it was three hours of productivity out the window.  I have so many things I need to do, and so little time.  I can’t be wallowing around in bed like a delicate flower of a man.

It’s a little different if you’re sitting in a chair watching TV, and fall asleep (like our friend above).  I don’t really count that as a nap, that’s just, you know, dozing.  MANLY dozing.  But when you go to the bedroom, regulate the temperature, remove a layer of clothing, and climb atop the platform… that demonstrates intent, and premeditation.  And I can’t have that.

What’s your opinion of male napping?  Or napping, in general?  Am I way off on it?  Do you agree that it’s kinda ball-baby?  Tell us about it in the comments, won’t you?

Have yourselves a fine, fine day.