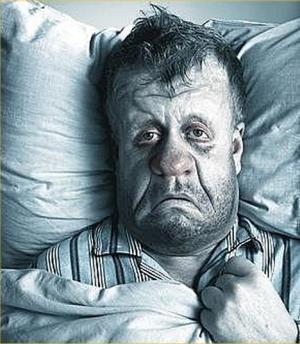 I felt a little off at work on Monday, and it continued to go downhill as the night progressed. By the end I was shivering, and zapped of all my energy. I drove home and thrashed around in bed for a few hours, never really getting into a deep sleep. And I was cold, cold no matter what.

The next morning I woke from my night of mattress-tumbling, and felt like I’d gone a couple of rounds with Mike Tyson. I ached all over, even my eyeballs.

I sent a text message to work, telling them I wouldn’t be in. I mean, there was no way. I could barely muster enough energy to walk across the room and grab a blanket. The idea of taking a shower, shaving, putting on pants, etc. seemed WAY beyond my abilities.

And so, I sat in a living room chair for hours on end, kinda drifting in and out of consciousness. Nothing interested me, not even watching TV. I didn’t turn it on until late in the afternoon, and watched multiple episodes of Property Virgins, never staying awake long enough to see any one episode in its entirety.

I felt like pure, undiluted shit. I didn’t want to eat, was sleepy but couldn’t sleep, and had zero energy. I’m not sure what had taken hold of me, but definitely don’t recommend it.

That night there was a swim meet, which I did not attend. But Toney didn’t get home until about 8 o’clock, and asked if I minded if we just had Subway for dinner. I wasn’t sure I could eat anything, but told her it was fine by me.

And it tasted really weird. I think the inside of my mouth was in an uproar. Everything was odd. God knows I know what Subway tastes like, and this wasn’t it. I struggled through half of the sandwich, and put the rest in the fridge. Then I returned to my chair, and shivered ‘neath a blanket for a few more hours.

I eventually tapped some inner reserve, and went to bed. Toney refused to join me, because of the previous night’s antics, and it was not good. Sleep wouldn’t take again. I’d drift off, and jerk awake ten minutes later. Over and over and over. I couldn’t get comfortable or warm, and it sucked.

Yesterday morning I didn’t feel much better, and sent another text message. I felt guilty, but simply couldn’t do it.

Wednesday turned out to be better than Tuesday, though. I had some coffee in the morning, took a shower, and ate the rest of that Subway sandwich. And it tasted normal. So, things were moving in the right direction. I still had a ways to go, but at least I was making progress.

I went downstairs and turned on Netflix, and watched a ton of stuff. I saw Jack Reacher, with Tom Cruise. It’s full of explosions, gunfire, and ass-kicking, and was reasonably entertaining. Then I saw an indie film called Safety Not Guaranteed. It was quirky, and I liked it. There were quite a few laughs and pleasing characters. And did I mention that it was quirky?

After that I watched five or six episodes of Orange is the New Black, which is pretty great. So, it was many hours of sitting in front of the TV. I can’t tell you how long it’s been since I’ve done that. I never watch TV.

But I was in a funk. I can see how people with ongoing health issues could succumb to depression. I was only two days in, and already feeling it. I kinda liked turning my brain off, and watching all that Netflix stuff, but there was a dark cloud over me, all day.

Today I feel only slightly better, but am returning to work. I need to rejoin society. It’s going to be a long ten hours, but I have to get back in there. I don’t think I could handle another day of wallowing in illness.

I look like a street person, but hopefully can make myself semi-presentable before leaving the house. And I’m dragging massive ass. I wish I could sleep. Why can’t I sleep?!

I hate to say this, since I was recently mocking people for saying they have the flu all the time, but this thing was very flu-like. I’m on the mend after only a few days though, which makes me skeptical. Maybe it was something else? Regardless, it’s not pleasant. This is the sickest I’ve been in a long time.

What’s the most work or school you’ve ever missed? How many days in a row? And  why? I only missed two this time, and think I missed 10 or more during my bout with honest-to-God flu in Atlanta years ago. I realize I’ve been fortunate, and am thankful for that fact. What about you? Please tell us about it in the comments section below.

And I’ll see you guys again tomorrow, I hope.