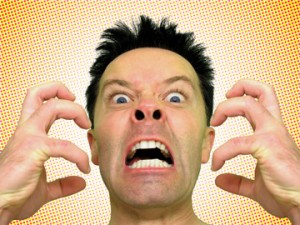 To be honest, some of these don’t fully piss me off, they just cause a mild grinding of the teeth and then I’m on to the next thing.  But I’m lumping them all together in a giant Piss Me Off hopper, for the sake of simplicity.  ‘Cause complications also piss me off…

—  The two missing CDs still haven’t turned up.  They are: The Promise by Bruce Springsteen (brand new, dammit!), and Singles 45s and Under by Squeeze.

I don’t think Sunshine would take them, because she doesn’t care about such things anymore.  But I still blame her, for fostering an atmosphere of chaos.  I believe everything was in such a state of craziness that day, I brought the discs in from the car and sat them down in some unusual place.  Then they got tossed into the recycling bin with a stack of newspapers or mail.

It agitates me, because I’m very particular about such things.  I take care of my CDs, and always put them away.  Whenever I get into someone’s car and there are discs scattered all around, outside their cases and whatnot, it bothers me on a primal level.  And that sure as shit ain’t the way I operate.  If Sunny hadn’t been here, spreading her special brand of sunniness, I would’ve gone straight to the bunker and put the discs where they belong.

—  It also pisses me off when people casually inject the word “obviously” into their speech.  Have you noticed this?  It’s a new development I’m picking up on.

For instance, somebody might say, “Obviously, I was raised on a donkey farm in New Mexico…”  Obviously?  I just met you ten minutes ago.  How would I know such a thing?  Should I be able to tell by looking?

It’s another irritating trend that’s starting to take hold, and piss me off.  It’s along the same lines as people starting sentences with the word “so.”  I was listening to a podcast last night, and someone was being interviewed about something or other.  And the interviewee answered roughly 50% of the questions with a “so” at the beginning.

Q:  How did you originally get started as a writer?
A:  So, I was obviously a big fan of Ernest Hemingway as a young teenager…

WTF?  This crap wasn’t happening a year ago, and now it’s happening all the time!  And I’m about to start throwing haymakers.

—  I also grind my teeth when people refer to a sports team as “we.”  “We did really well this weekend…”  We?  What did you have to do with it?  You were sitting on your couch shotgunning Coors Light and Fritos Scoops.

When I was in school people used to wear t-shirts that said Property of the Miami Dolphins, or whatever.  And I’d always think, “Ha!  Of what use would that dickface be to the Dolphins?  Maybe he could lie on his back and they could tee up a football in the sunken space beneath his sternum?”

Or maybe they were trying to create the illusion that the shirt itself was property of the Dolphins?  You know, as if they picked it up at one of their training camps, or whatever.  Bullshit!  They bought it at Heck’s for $7.99.

—  And it pisses me off when people log onto Facebook and try to convince everyone their life is perfect bliss, 24/7.

“I woke up this morning in my beautiful home, with my sexy, loving husband lying beside me, and my wonderful children sleeping peacefully down the hall.  And I realized just how lucky I am, and how great my life truly is.  I took a large mug of coffee onto my spacious deck, while the beautiful birds chirped good morning, and I wept, literally wept, with deep-down joy…”

Goddammit!  That kind of thing really pisses me off.  I’d love to body-check those people into the Grand Canyon.

And I need to go to work now, with two more items left to go.  I’ll just keep them until the next edition of What’s Pissing You Off Now?

One good thing to report:  I picked up my new contacts today, and I can see again!  It’s amazing.  I feel like I’ve rejoined the physical world.  But let’s not get bogged down in the positive…

In the comments section, please tell us about the things that are pissing you off, right now.