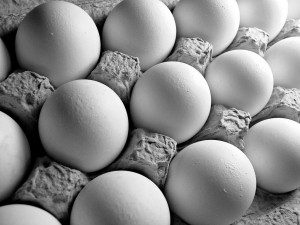 Here in the Upper Pierogi Belt, Easter is a HUGE deal. I think it’s because 75% of the residents are Catholic. In fact, 75% of our house is Catholic… but that’s neither here nor there.

Where I’m from Easter meant a basket filled with candy for the kiddies, and a better-than-average Sunday dinner, often with extended family members. Here it’s much more.

Actual gifts are exchanged, like a mini-Christmas. And I’m talking big-ticket items, like bicycles and Playstations. Before I moved to NEPA, I’d never heard the phrase, “What did you get for Easter?” It just doesn’t compute. You get chocolate, and later ham. That’s what everybody gets for Easter.

Somebody walked up to me a few days ago, with another person in tow. They wanted me to serve as a tie-breaker in an argument they were having. “Jeff, do you and your wife exchange Easter presents?” I was asked.

“Huh? Are you serious?” I answered, which caused the guy in tow to smile, and sense victory.

“Well, did you used to, before you became burned-out and old?” she said, trying to snatch victory from the jaws of defeat. And being wildly insulting (yet accurate) in the process.

“Never,” I said. “There’s no such thing as ‘Easter presents’ outside this freaky little bubble we’re in.”

“Yes!” the guy in tow shouted, and the woman frowned with disappointment. “Every couple I know exchanges Easter presents,” she muttered, and walked away.

Hey, people can do whatever they want. It’s no skin off my scrote. It’s just strange, how certain areas of the country are so wildly different in their customs.

I know people who attribute blanket-statement stereotypes about entire sections of the U.S. My parents, for instance, believe as an absolute fact that 90% of Pennsylvanians are blowhards with an overbearing opinion on every subject. Whenever they come to visit we encounter many “normal” people along the way, but when we meet some bombastic loudmouth, they shout, “A-ha!”

I always say, “So, people who live on the West Virginia side of the border are the salt of the earth, but once you cross that line… it’s asshole city.” “Yep,” they answer. It’s sometimes infuriating, and more often amusing.

Actually, since they’ve started spending every winter in Florida — and meeting people from all over the country — they’ve softened their stance a bit. Only a bit, though.

And there are all sorts of negative stereotypes about my home state (my folks don’t care for that), the entire southeast, as well as California, etc. But I’ve lived all over, and it seems like people are generally the same. They’re just trying to get through the day, and keep the bills paid. Ya know?

However… there are customs that are unique to certain areas. And it’s slightly annoying when the people there proclaim their way as the RIGHT way. Or, worse, don’t even know there are other ways. But, differences are cool. I endorse them. It keeps things interesting. I have no problem with the folks around here throwing a second Christmas every spring. More power to ’em. Pass the haluski.

What’s been your experience with regional customs and stereotypes? Anything to report? Or confess? Use the comments link below.