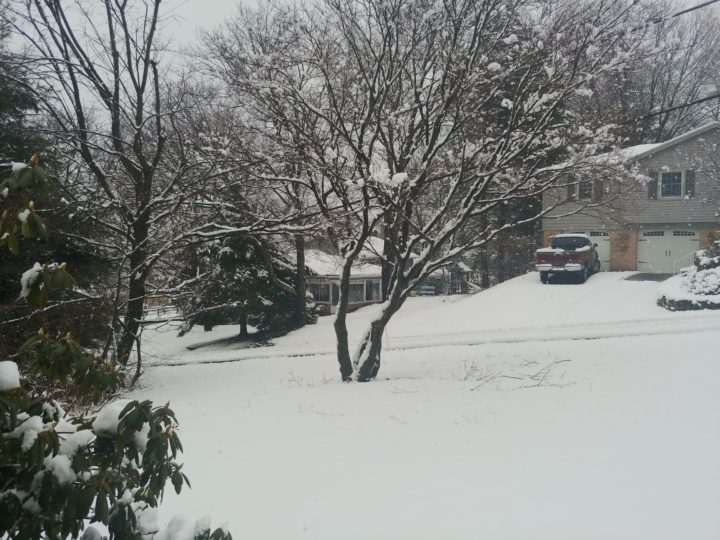 But first, look at this bullshit. I took this photo from our front porch about fifteen minutes ago. And it had been like spring… We were talking about our lawn mowing options, just yesterday! That’s not a light dusting, it’s a real snow. Sure, it’ll be gone quickly. But it’s a demoralizing turn of events, my friends. It’s not good when you start your day shouting, “Are you fucking serious?!” It’s like we’re living inside a black & white photograph again. A couple of days ago it was full Technicolor. I’m becoming angry.

Also, you know who I hear all the time, for reasons unknown? The Spin Doctors. It feels like they’re out there… and everywhere. Every grocery store I walk into, every convenience store I visit, while I’m listening to baseball games on the radio… The Spin Doctors have insinuated themselves into American culture as few bands have. It’s bizarre to me. But they’re all over the place, thirty years later! Why is that? Why them? …It’s probably not even worth contemplating. But I wanted to bring it up. Are you hearing them everywhere too? WTF??

And now… what food or drink have you completely written off because of some bad experience in the past? The only one I can come up with is Long Island Iced Tea. I’ve told that story before, and it doesn’t need to be told in great detail again. It was a million years ago, during the early 1980s, and I was with Rocky. We were drinking in an unknown bar, in a town where we never drank, ingesting a great number of Long Island Iced Teas: a drink we never ordered. And it led to a series of events, which I’ll summarize:

It was a terrible night. One of the all-time worst. In fact, I quit drinking for two years after that. Yeah, there are a couple of other bullet-points I’m leaving out… But even though it’s been more than 35 years, my stomach still churns whenever I catch a whiff of Long Island Iced Tea. It has a distinctive smell that I remember, and it does a number on me, even now. I would NEVER be able to drink one. Holy hell.

But that’s all I can come up with. Thankfully, I’ve never had food poisoning. I’m not sure how that’s possible. Maybe because I don’t eat crustaceans ‘n’ shit? Toney has had it several times and swears off the food for a while. Then she goes back. She got very sick in California, after eating shrimp at a fancy-ass restaurant. I mean, she was down and out for days on end. But she’ll still eat those bugs o’ the sea. I don’t get it, but whatever.

Do you have anything on this? If so, please tell us about it in the comments.

And I need to call it a day here.

I just uploaded a new episode of the podcast, for patrons. And here’s the summary:

In this one I tell you about a fresh car crash I witnessed on my way to work and how I reacted, the reason I’m dragging ass, my tasty but unusual turkey-tubes dinner, the world’s most depressing places of business, and a hard-to-explain complaint about the way people drive through parking lots these days. Thanks for the support, and thanks for listening!

I hope you guys have a great weekend! Talk about hard-earned… But it’s nearly here.

I’ll see you again on Monday. Or maybe Tuesday. We’ll see how it goes.