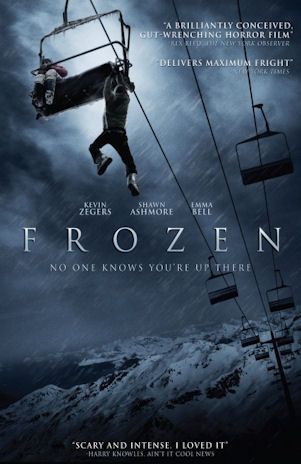 I recently pulled the plug on Netflix DVDs, and went with streaming only.  I don’t regret the decision, but admit there’s been a few times during the past month when I was interested in watching something, and was disappointed to learn it’s no longer available to me.  And I’m not talking about new releases – those will never be offered.  I mean older stuff from the catalog.  Oh well.

A few nights ago, before I started the 11-day work marathon, I commandeered the Big Ass Television and settled in for a movie.  It’s rare when that sort of thing happens, and I began scrolling through the “just added” file at Netflix.  And I chose, on a whim, a so-called thriller called Frozen.

The description sounded interesting:  three friends convince a ski lift operator to let them go up the mountain just one more time, before closing, and get left behind.  They find themselves sitting in a lift chair, suspended high in the air, as the resort is shutting down for the week.  I knew it wasn’t going to be a high-brow cinematic exercise, and that was perfectly fine with me. Sometimes I’m in the mood for big, dumb entertainment.

And man, this one scratched that itch.  It reminded me of the kind of flicks my friends and I used to see on HBO during the very early days. They were usually things we’d never heard of, but turned out to be a lot of fun. Like White Line Fever, and Damnation Alley.

The acting isn’t very good in Frozen, especially during the first part of the film. You know, where they show the people who are about to be plunged into unspeakable horror, just living a normal life?  It’s the part where we’re supposed to connect with them, so we’re invested in their plight when the shit starts hitting the fan.

But I didn’t like any of those dumbasses.  The two guys were constantly (constantly!) insulting each other, and engaging in good-natured ribbing.  If someone kept coming at me like that, good-natured or no, I’d tell him to get fucked.  But these guys just kept reacting and making constipated faces at each other.  And the girl was whiny and dull, too.  I couldn’t wait for the deaths to start piling up.

However…  Once they were on the lift, it got kinda good. Oh sure, there was some serious ridiculousness.  Like when the girl fell asleep, in sub-freezing temperatures, with her hand wrapped around a metal pole.  She had to practically de-skin herself, to free it. Why??  Why would a person sleep with their hand gripping a frozen pole?  It’s ludicrous.

And the wolves!  What kind of fancy-ass ski resort has packs of bloodthirsty wolves roaming around?  You’d think word would start to spread pretty quickly about something like that, and hurt business.  A few dozen disembowelments on the slopes, and profits would likely slide. Right?

But there was some genuine tension and suspense, and I enjoyed the hell out of that not-very-good movie.  I like the high-concept, and the way 90% of the film was nothing but people sitting in a ski lift. And I found myself grimacing and tensing-up more than normal.  The director did a good job.  Bill and I would’ve LOVED it in 1978, and I loved it in 2012.

And speaking of the “dumb, but love it” category…  That new Van Halen song?  I thought it was a turd the first few times I heard it.  I was just sitting there, in front of my monitor, frowning.  But it’s growing on me…  It gets better with each listen.  It’s certainly not the greatest thing they’ve ever done, but I don’t think it’s as bad as I originally feared.  I find myself walking around the house singing it now.  Heh.

And that’s gonna do it for today, my friends.  If you’ve seen Frozen, I’d like to know your thoughts.  And if you have anything new to add to the “dumb, but love it” file, please do so, in the comments section below.  It doesn’t have to be a movie, it can be anything you want.  “Dumb, but love it” cannot be contained.

Also:  There’s some maintenance going on in the background, so don’t be alarmed if the site goes off the air for a while.  It probably won’t, but it’s possible.