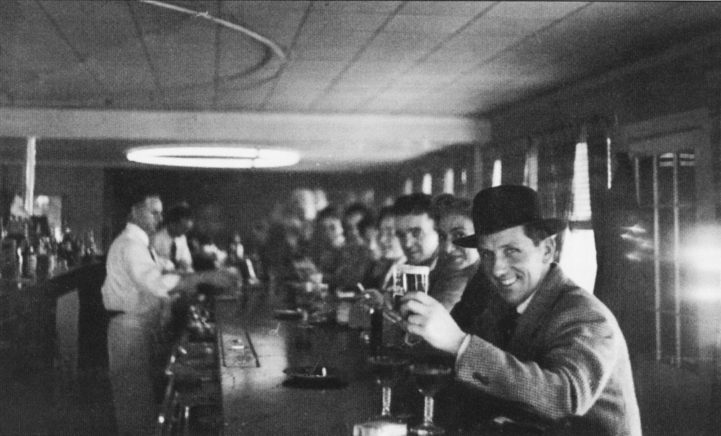 It might seem weak, but I’d go back to my hometown of Dunbar, WV and attempt to just blend in. I’m a big fan of time travel books, and sometimes movies, and have done an inordinate amount of daydreaming on the subject. And sure, there are other scenarios I’ve concocted. Like, for instance, going back and witnessing the Beatles (the Quarrymen, then) when they were 17 years old, or whatever. Or maybe the Beatles in Hamburg, Germany in 1962? You know, that kind of thing? Or there are many, many baseball-themed time travel fantasies. I’d love to see Babe Ruth play or Ty Cobb. Or maybe Johnny Bench when he was in high school?

And that night at Ford’s Theater would be interesting, don’t you think? Maybe chillin’ at the Gettysburg Address with the ol’ Railsplitter? The list would get long in a short amount of time.

But, if I had a once-only opportunity, I think I would almost certainly just go back to Dunbar in the late 1940s. After WWII, but not immediately after. Maybe 1947 or 1948. I’d have to get some clothes that would allow for the blending-in. I couldn’t go in my Magnolia Thunderpussy shirt or anything like that. Then I’d rent a room at a boarding house in town, and just walk around and soak it all in. I wouldn’t even want to sleep.

I’d probably be considered a real-life giant, and the whole town would be buzzing about the huge stranger suddenly in their midst. That would be unfortunate, and could possibly ruin the whole blending-in part of it. But I think people back then were a lot smaller. It’s amazing when I see uniforms at the Baseball Hall of Fame, from the 1930s and 1940s. They look like they’d fit modern-day middle schoolers. Same thing at the Civil War museum in Gettysburg. The clothes and uniforms are shockingly small. So, I have a feeling I’d tower over most people, and be much, much fatter. That could be a problem.

One of the things I remember most vividly about Stephen King’s great time travel novel, 11/22/63, is when the protagonist first travels to the 1950s and tastes root beer at a drug store lunch counter. He describes how great it tastes without all the additives, etc. Those are the small little moments that I’d get the biggest kick out of. I’d have to be careful not to start shouting in amazement at every tiny little thing.

Needless to say, I’d spend ample time in the local taverns. It would be weird, but I might run into my grandfather. Or grandfathers, even. I don’t know how I’d react to such a thing. But that wouldn’t be the main reason for going. I’d just like to taste the beer and talk to the people. And… again, just soak it all in. For some reason, the notion of meeting people from my family kinda scares me. I’m afraid I’d somehow fuck it all up. I don’t trust myself with such a responsibility. Ya know?

And I’d walk through every business in town, and up and down every street. It would probably be bizarre: the familiarity of it all, mixed with the big differences. But it would be amazing. I’d listen to baseball on the radio and all the programs of the day. Maybe take a day trip to Charleston, on the streetcar or whatever. It would be fantastic!

That might seem like an odd choice, but it’s the scenario I return to whenever I think about time travel. A psychiatrist might be able to get to the bottom of it… What about you? What would you do if you only had one opportunity: one week in another time. I suppose it could be in the future, although that doesn’t much appeal to me. I’m all about the past. In any case, tell us how you’d spend your week. Use the comments link.

And, by the way, one of my all-time favorite time travel books is Time and Again. It features an unfortunate sappy-ass love story, which I wish wasn’t there. But the author puts a lot of emphasis on the small little things I mentioned above, and how amazing that stuff is. The main character travels back to 1890s NYC. There was a sequel many years later, published when the writer was approximately 150 years old. I think he typed THE END, and dropped dead. It’s good too, but not as good as the original. If you have any suggestions for great time travel novels, I’d love to see those too!

And before I call it a day, here’s your Thursday podcast episode, hot off the presses. And here’s the summary:

In this loose and erratic episode I tell you about a surprising modern-day phenomenon I discovered at Target, the current seasonal mash-up we’re living through, an explanation of Bourbon Season, an attempt at some music talk without being all music nerd about it, and the time in Atlanta when a delicate Australian musician was nearly pulled off a stage for being pompous. All that, and the Whistle Dick of the Week! It’s a bit of a mess but somehow hangs together. Enjoy!

I’ll be back on Monday. You know, in the future? Wow… lame.