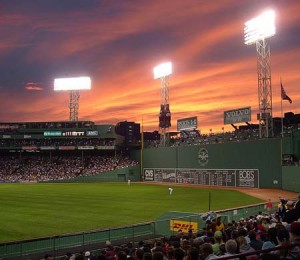 My vacation begins soon, and I wish we were returning to London, or something along those lines.  Instead, I’ll be holed-up at the library, pounding out the first draft of my next book.  Yeah, it’s not exactly a European adventure, but I’m still excited.  I think the book is going to be a lot of fun, and I’m looking forward to getting the project underway.

But, while I was driving yesterday, I started feeling mildly guilty that it’s not a family affair.  It’s just going to be me and my laptop and a bunch of strangers who believe they’ve lived long enough to earn them the right to shout-talk about their press-on replacement hips in a public library.  Oh well.

After the sadness evaporated, I began thinking about family vacations from my childhood.  We almost always went to Myrtle Beach, and occasionally Daytona, Florida.  Pretty much every year.  There weren’t too many surprises, but that was OK.  I have fond memories.

One summer, however, we did something completely off the wall.  I’m sure my mother cooked it up, and it turned out to be the most memorable and fun vacation of ’em all.  We drove north, instead of south.  Pretty radical, huh?

I was probably 13 or 14 at the time, and I believe we were traveling in a gigantic green station wagon, with wood-themed contact paper on the sides.  Just like the Griswolds.  And I’ll now briefly tell you about some of the highlights from that trip…

We saw a baseball game at Three Rivers Stadium, but I can’t remember much about it.  It was the Pirates, and a team other than the Reds.  That’s the best I can do.  Three Rivers was one of those round, multi-purpose stadiums that were all the rage in the ’70s.  Fairly boring, and bloodless…  But it was another ballpark scratched off my list.  I had a goal of visiting them all, which I still haven’t achieved — thirty years later.  In fact, most of the baseball stadiums I’ve visited no longer exist.  Including Three Rivers.

We also went to New York City, when it was really filthy and crime-ridden.  That was pretty cool!  I remember walking through Times Square with my parents and brother, completely surrounded by live sex shops and jack-off parlors.  A person handed me a flier at one point, and it featured a topless woman who was either in the throes of sexual ecstasy, or suffering a stroke.  My mom snatched that piece of paper out of my hands so fast, it was like a cobra strike…

I remember a huge-ass billboard for the movie A Bridge Too Far, and I recall riding past CBGB’s on a bus tour.  The whole city was grimy and menacing, and that’s no exaggeration.  It’s completely different nowadays, and I consider it an improvement.  But I liked the 1977 New York, too.

My parents, however…  NOT impressed.  My brother and I lobbied hard to see a game at Yankee Stadium, and my folks said, “There is no way in hell we’re going to be walking around the Bronx after dark.”  And that, as they say, was that.

We did, however, visit Cooperstown and the Baseball Hall of Fame.  And man, that was a pure religious experience for me.  I was at the height of my baseball mania, and I was literally shaking with excitement while we walked through that place.  It was cool as hell.

I remember a telephone receiver which you could hold to your ear, and listen to a recorded message from Babe Ruth.  Wonder why they don’t have that anymore??  It was cool.  And I recall getting a big kick out of sitting in the various defunct stadium seats, like the Polo Grounds and Ebbets Field.  I still love that part of it, although I can barely squeeze my ass cheeks between the armrests at this point.

Down the street was a shop that carried old baseball memorabilia, and I accidentally ripped the cover off a game program from the 1940s.  The shop owner heard the ripping noise, and flew off the handle.  I was mortified.  I still get butterflies in my stomach, when I think about it.  My parents offered to pay for it, but he just waved us out of the store, with disgust.  Horrible.

After Cooperstown we went to Niagara Falls, and rode a boat that goes behind the water somehow.  They made us wear stank-ass raincoats that a million strangers had worn before us.  Mine smelled like armpits and onion rings.  I remember being mildly alarmed on that boat ride, but can’t pinpoint the source of my anxiety.

Afterward, we went across the border into Canada, and it was a straight-up tourist trap.  There were wax museums and Ripley’s Believe or Not, and all sorts of touristy crapola.  We wanted to spend the night there, and chose a motel that looked OK from the road.  But it turned out to be a shithole.

Our room was filthy, and there were bugs in the bathroom.  The carpet looked like it hadn’t been vacuumed since the Kennedy administration, and there was a fake painting of “Blue Boy” above the bed — with one eye missing.  It appeared someone had shot it out with a BB gun.  WTF?

My brother and I began howling in protest, and my dad got really mad at us.  Basically calling us spoiled fancy-lads, and that sort of thing…  He was furious, which is not the way he rolls.  He’s one of the most laid-back people I know.  The two of us went down to the pool, to check it out and also get away from all the weird tension we’d apparently triggered.

At the pool were a bunch of kids, and within minutes there was a turd in the water.  Everyone began squealing and racing up the ladders, and there was a big ol’ log floating around.  What the hell, man??  Did it travel down somebody’s swimming trunks leg?  I don’t even know how something like that could happen.

I remember a kid on the sidewalk, on all fours, examining the turd and commenting on it.  At one point he began shouting, “She’s breaking up!  She’s breaking up!!”  Which was a reference to the opening credits of The Six Million Dollar Man.  Good stuff.

Back in the room my dad had settled down a little, but it still wasn’t good.  We sat, and nobody spoke for a long time.  Then he said, “If you boys see that Coke can start moving, try to catch it.”  We looked over and there was a table, attached to the wall, which was radically out of level.  It looked like someone had sat on it at one point, and the Coke was hanging on for dear life.

That bit of levity relieved the pressure, and everything was OK after that.  But I knew better than to complain about the roach I saw while taking a shower.  I just kept that to myself, even though it gave me the freaking heebie-jeebies.

One of our final stops (I might have the chronology slightly out of order), was Boston and a night game at Fenway Park.  We rode the subway there, which was a new experience for all of us.  It was fairly intimidating — completely packed, with people mashed against me on all sides.

But Fenway was amazing.  One of the most memorable moments of my life was when we walked out of the tunnel, and emerged inside the stadium itself. The green grass… that iconic left field wall…  Yaz(!) warming up in right…  It was a feeling I’ll never forget.  I had a giant lump in my throat that lasted through five innings at least.

The city of Boston was great, too.  I loved it there.  I think I announced that I’d be living there someday.  Yeah, and I’ve never been back…  And so it goes.

That was the most memorable family vacation of my youth.  When I think about it now, I realize it must have cost a fortune.  Holy shit nodules!  But it was certainly a great time.

The Question of the Day is predictable.  In the comments section, please tell us about your most memorable vacation as a kid.  Or as an adult… I don’t care.  If you have a good story, we’d like to hear it.