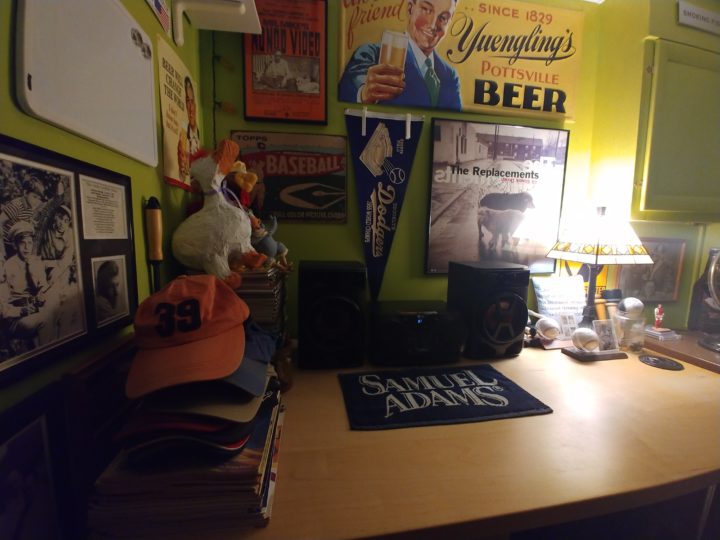 That’s a rare peek inside The Bunker, right there. As you can see, I successfully set up my new stereo. It was my grand achievement of the weekend. Hey, it’s more than I usually get done… The hardest part was clearing out the hundreds of CDs that were previously stacked on that table. The actual setting up o’ the stereo took roughly one minute. The moving o’ the CDs took a lot longer.

It sounds great, by the way. I’m no audiophile and don’t require a $5000 setup. This is a small room, and that thing hits the sweet, sweet “most bang for the buck” spot I’m always looking for. I know what cheap and shitty sounds like, and this ain’t it. As usual, I played the traditional Steely Dan CD to test it out. It passed. Sounded full and rich, to my ears anyway. I’m pleased with the purchase.

What was your grand achievement of the weekend? Tell us about it, won’t you?

As you can see, I have the walls covered. That’s a signed and framed Replacements poster. Paul Westerberg signed it while I hobnobbed with him in an Atlanta bowling alley years ago. I have a feeling I enjoyed the experience MUCH more than he did. He seemed like he was ready to crawl out of his skin. But he was reasonably friendly, just attempting to endure the dreaded record label-sponsored meet ‘n’ greet.

And there’s a big metal Yuengling sign I bought at the brewery in Pottsville. I love that thing. Looks fantastic. Also, a 1955 Brooklyn Dodgers pennant,  purchased from a shop in Cooperstown, NY. And a framed advertising piece for a notorious movie called Mr. Mike’s Mondo Video. It was supposed to be shown during the summer hiatus of Saturday Night Live, during the late 1970s. It features many of the original SNL cast, and after NBC saw the finished product… they refused to air it. So, it was shown in theaters instead. It was written and directed by Michael O’Donoghue, a full-blown maniac comedy pirate. I remember Siskel & Ebert just completely trashing it, and being almost offended that it was allowed to exist in this world. Heh.

And there’s a phony-baloney Topps baseball card ad. Hey, it’s also cool looking, and I was OBSESSED with baseball cards at one point. So, there’s some relevance there. I think a Surf Reporter sent me that Samuel Adams bar towel. And those two autographed baseballs are signed by Johnny Bench and Hank Aaron.

Anyway, I hate to admit this but so far I’ve mostly been Bluetoothing music to that stereo. It’s just so easy. Everything’s at my fingertips. In fact, I have a supplementary app on my phone where I can access the rare items not on Spotify. So, between the two… I have nearly every album ever recorded. It’s great! …And I feel dirty admitting it.

How do you listen to music these days? I still listen to CDs, especially in my car. And I’m sure I’ll listen to them at home, as well. But that streaming stuff… man, that’s not bad at all.

I need to call it a day here. Apparently, I need to get into work. I’m being peppered by texts, and I’m not sure what’s happening.

I released a new podcast episode around midnight last night. Here’s the summary:

In this one I tell you about some electrifying news I received and a related plan, a friend who’s an extreme eater and his various adventures, my hatred of bells going off all willy-nilly, underwear night at a minor league baseball stadium, an amputee convention on an island off the coast of Georgia, the mystery of “the insurance man,” mediocre beer from a growler, and the Whistle Dick of the Week! Also stick around for a very cool trailer for a forthcoming project after the show. Thanks for listening!

And, as usual, I want to remind you about using our Amazon links while doing your holiday shopping. It’s getting down to the wire, but there’s still time. Please just pass through one of our links, and shop as normal. It’s a big help to me.

Thank you, guys. I’ll be back on Thursday.