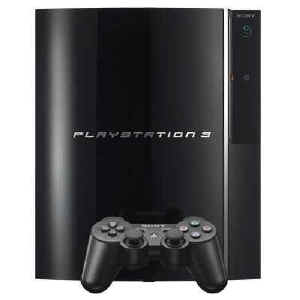 So, the rumors proved to be true and Santa “Jiggles” Claus left the Secrets a Playstation 3 as a Christmas present this year.

To be perfectly honest, I’m not real comfortable with a morbidly obese octogenarian in a prison beard stumbling around our house while we’re upstairs sleeping.  But, I’d likely be condemned by society if I even DARED question the motives of the great Claus.  So I’ll just let it go.  Sheesh.

The boys are loving their gift, though.  I’ve gotta hand it to the fatass, he knows what he’s doing.  The old guy hasn’t lost a step, despite being, what, three hundred years old?  Wow!  Talk about your iron man.  Not even Carl Rappaport can compete with a streak like that.

The boys also received four games to go with the console:  Beatles Rock Band, Modern Warfare 2, Ghostbusters, and Bad Company.  I don’t know much about any of them, except I keep hearing gunfire, occasionally interrupted by “Yellow Submarine,” or Ray Parker, Jr.

Wonder what John Lennon would think about that?  I can foresee a situation where “All You Need Is Love” is “performed” in our family room, followed closely by the oldest Secret thoroughly roasting a Russian guard with a flamethrower, leaving only a pile of ashes and a pair of boots.  Love, indeed.

The Playstation connects to the internet wirelessly, so we can also hear other kids trash-talking each other.  And nothing says Christmas like a gang of prepubescent boys, in Kansas or wherever, screaming profanity through your TV speakers.  They all sound like they’re eleven years old, and have the vocabulary of… oh I don’t know… Redd Foxx?

And speaking of connecting to the internet, we can now stream movies and TV shows through Netflix and PS3, directly to our television.  It is, perhaps, the coolest thing ever.  I watched The Ghost and Mr. Chicken on Christmas night, and it was perfect.  It looked like a DVD was playing.  The picture quality couldn’t have been better.  As far as I could tell, anyway.

I also watched a few episodes of Dexter, and I haven’t been as excited about a television enhancement device, since we first got a DVR — many years ago.  It’s fantastic!

So, the Playstation has been quite a hit, with everyone in the family.  What was the biggest hit at your house this year?  Tell us about it in the comments, won’t you?

I’ve got a bad cold, if you can believe it.  A great way to end the year.  I could feel it taking-hold yesterday, and by ten o’clock last night I had crystal-clear fluid cascading from my left nose hole.  Only the left one, for some reason.

Today my voice is unnaturally low, and I sound like that guy in the Statler Bros., way down on the end.  The Sickness is dragging me down, too.  My energy level has plunged, and I feel like I should be a Civil Service clerk in South Carolina or Georgia, or somewhere else associated with slowness.

The pressure makes my teeth hurt, as well.  Know what I mean?  I’m not a fan of any of it…

I hope everyone had a great holiday, and all that good stuff.  Please don’t forget the temporary price reduction on our blue/gray Evil Twin shirts, to just twelve bucks.  You can order ’em here.  They’re a thing of beauty, and will be going back to sixteen dollars on January 1.  Now’s your chance to treat yourself, for a change.

And if you’ll excuse me, I’m going to go upstairs and enjoy a Magdalena Calzone frozen meal.  Today I think I’ll go with the meat loaf, thank you very much.