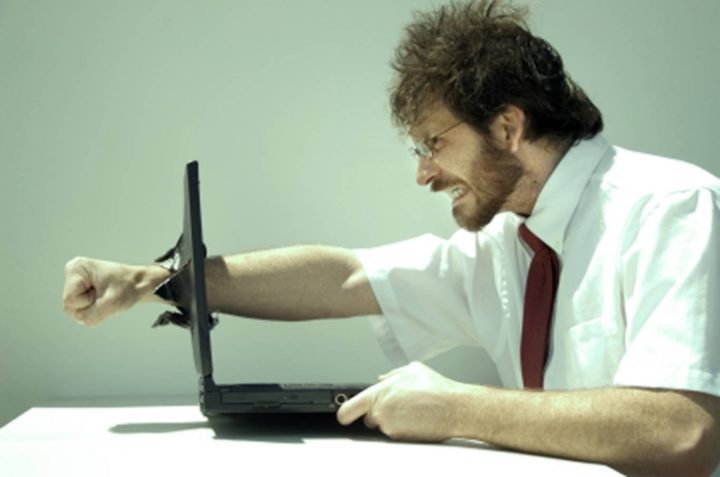 A few weeks ago I bought a new laptop. I just couldn’t take it anymore… The old one was so bogged down and clunky, it would almost literally make me lose my mind. I’d get so wild and whipped-up it felt like I was shedding my skin. I wanted to take that thing out onto the deck, do a full 360-degree whiparound, and discus the shit deep into the woods.

So I got a new one. It’s nothing fancy, but should do the trick. However, I’ve already had some aggravating moments with it too.

I decided I’m going to keep the new machine stripped down and clean. No downloads of questionable anti-virus and anti-malware programs that somehow, over time, breed dozens and dozens of additional programs which launch into resource-sucking action as soon as the mouse is jiggled. I have one reputable program that does all that for me now, and I’m just going to leave it alone and let it do its thing. Keep it simple and clean.

In fact, the only thing I moved over from my old laptop is the music. And I screwed it up. It’s my fault, but that doesn’t make it any less infuriating. Somehow I had every song by artists that start with A through E in my library twice. I had an entire album by the ludicrous band Planet P Project (“Pink World”) in there four times. It probably shouldn’t be there at all. Also, they don’t fall into A through E. So, what the hell?

I spent several days trying to figure out how to fix that problem, without having to manually delete hundreds of songs, one by one. I eventually came up with a solution, which is nifty, but too boring to explain here. By then, though, I’d experienced several days of my right hand WHIPPING through my hair.

Also, I needed Microsoft Word, but didn’t want to pay $150 for the entire Office program. And I didn’t want to get into a monthly Office subscription plan, either. I just needed Word, and it didn’t really matter which version.

So… I headed over to eBay and bought a copy of Office 2007 for twenty bucks. Everything worked out with it, and I’m using it now. But it took almost four weeks of back and forth with the broken-English seller to get to the finish line. I feel like he was playing games with me, but, for the life of me, can’t figure out why. It’s not like he profited in any way, except for maybe the emotional satisfaction of making me almost lose my fucking mind.

Through the course of it all, he provided me three different tracking numbers, two of which never worked. They were just listed as “pre-shipment” and never changed. Interestingly enough, it was the second number that eventually started to move. Not the last one he gave me, but the second one. “Sorry for the impossible mishaps,” the guy said. What?

When the package finally arrived there was no product key, so I couldn’t activate it. And he refused to email it to me; he said he’d drop it in the mail “today.” Another 48 hours of inactivity ensued, and the fourth tracking number finally started to move. The whole ordeal lasted three and a half weeks, and we exchanged almost twenty emails. But we finally got there.

What is it about technology trouble that’s so maddening? There are few things that make me as crazy. Slow drivers in the left lane of the interstate come close, but it’s not the same. The only thing I can think of that causes me to truly become honest-to-God furious is when someone talks down to me, in a patronizing attitude and tone. Man, that’s a trigger like no other. That and a half-second delay when I click something on the computer.

What about you? I’m not talking about annoyances, like people who stand in front the ATM and study their receipts. Or people at Sam’s Club who take a sample and eat it right there, as if the old lady is waiting on a review. Get your doughy ass out of my way, sausage-blocker! No, I’m talking about stuff that causes a white flash of anger, and nearly a loss of control.

Also, if you’re getting a head start on your holiday shopping, I’d like to remind you to please use our links to enter the Amazon site. Then… shop as normal. It costs you nothing extra, and helps me out a great deal. Thanks in advance.