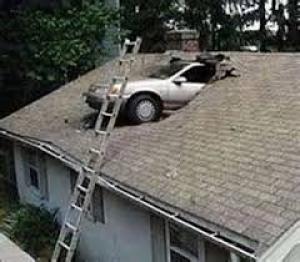 I stopped to buy gas on my way home from work Tuesday night, because Toney was planning to use my car the next day. Her Honda is still in the shop, and we’re juggling two vehicles between three people. So, I filled up the tank, and noticed the glowing golden arches across the street…

Should I do it? Should I load two or three cheeseburgers into my mouth with the heel of my hand, or just go home and have a bowl of Corn Flakes? I knew the latter option would be the healthier one, but that’s not the kind of thing that carries a lot of influence in my world. And, three minutes later I was in line at McDonald’s, behind four(!) other cars, at 2:30 in the morning. I have a feeling I was the only sober one in the bunch.

I ordered two burgers with no pickles, and it took longer than my inner-sensors told me it should. Special orders at fast food places are always an iffy proposition, but I’ve gotten myself into trouble trying to remove pickles from a burger while driving; a cop pulled me over a few years ago, and gave me a full-blown drunk test. So, I sat there and waited for them to prepare my pickle-free order.

Eventually, I re-entered I-81 and began scarfing down the fast food goodness. Oniony! A few miles up the road I noticed vehicles in front of me hitting their brakes. They weren’t stopping, they were just slowing down. And when I got there, I saw some disturbing shit.

In the median, to my left, was a tractor trailer on its side. Smoke was pouring out of the thing, and it felt like it had just happened. Like seconds before. Further along was a lot of debris, and the road was covered in all sorts of broken plastic, and whatnot. It was crunching beneath my tires as I drove over it.

Other people were stopping, and running to help. I wondered if I should do the same, but knew I didn’t have a lot to offer. During an emergency there’s not much call for a guy who stands in the back and makes pithy comments. So, I just kept on going.

It was scary, though. It looked bad, and had happened so recently the cops and fire trucks hadn’t even arrived. Interstate 81 is one of the worst roads I’ve ever encountered, and I’ve encountered a lot of roads.

I went home and had the bowl of Corn Flakes anyway, and crawled into bed. When I got up I saw that I had two missed calls from Steve. And there was a text message from Toney, saying she was glad I was OK.

Weird, I thought. But whatever. I flopped down in front of my computer, and my phone rang. It was Steve, again. What the shit? I answered it, and he said, “Oh good, you’re not dead.”

Apparently the wreck was worse than I knew – a double fatality – and shut down the interstate for hours. It was all over the news, and was a big, big deal. And I’d been right there, moments after it happened. Here’s an article about it, with some amazing photos. Freaky, man.

It makes me wonder… If I hadn’t ordered those burgers with no pickles, and gotten my sack o’ fat quicker, would I have been involved in the crash? It’s certainly possible. My hatred of the fast food pickle might’ve saved me. Tiny little decisions like that can change the entire course of a person’s life. Ya know?

My condolences to everyone involved in that crash. It was horrifying.

What’s the worst thing you’ve ever seen while driving? I know this is kinda morbid, but let’s go with it anyway. Have you witnessed any spectacular roadway carnage, or anything of the sort? If so, please tell us about it.

Also, can you remember making any seemingly inconsequential decisions that might’ve led to you averting a crisis?

Next time I’ll tell you about Toney’s hospitalized car, and how I managed to piss off the manager of a muffler shop so badly we’ll never be able to return there. Heh.