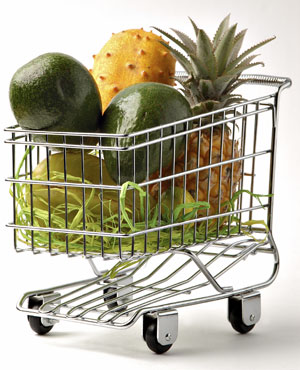 A few nights ago Clive Bull mentioned a new British poll which supposedly reveals the ten “most hated aspects of the weekly shopping experience.”  In other words, the ten most common things folks find annoying about grocery stores…

I don’t do any of the big-time household grocery shopping, I’d lose it before I reached the canned meat aisle, but it seems like I’m constantly being sent (or I go on my own) to pick up fill-in items.  Constantly.

So, I know a few things about grocery stores, bucko, and I’m going to briefly give you my thoughts about each of the complaints on the list.  Starting now:

#10  Store temperature I have a feeling this is about old people always being cold.  You know what I’m talking about.  You see them all bundled up in heavy wool, in the middle of August, while everybody else is walking around with only their reproductive organs behind cloth.  I don’t know what’s going on, possibly something to do with a lack of platelets?  Who the hell knows?

But I love really cold grocery stores.  In fact, I’m disappointed if there isn’t at least a thirty degree drop from outside to in.  Supermarkets, more than just about any other type of retail establishment, will give you that satisfying, bone-chilling blast of cold in the summer.  It’s fantastic.

So, the seasoned citizens need to quit their bitching before they ruin it for everyone.  Just buy your enormous can of store brand coffee and move along, sister.  The Price is Right is about to come on.

#9  In-store marketing promotions Are they talking about buy-one-get-one-free?  What’s wrong with that?

Oh sure, the “regular” price is almost certainly bullshit, but so what?  It gives me a justification to buy TWO large sacks of chips, instead of just one.  Those so-called In-Store Marketing Promotions have been providing me cover for a couple of decades now.

Sheesh.  If you don’t want to participate, don’t.  Nobody’s pressing a gun to your head, and growling, “Buy far too much sausage.  Buy it!”  I have never seen, or heard about that happening.  Not once.

#8  Confusing layouts Confusing?  It’s a grocery store, not a hall of mirrors.  Let me try to help you out…

The section where there are big bins of corncobs still in the husk?  That’s produce, and not office supplies.  The place where you see a man or woman dressed in white, placing shrink-wrapped steaks and hamburger into a giant open-top cooler?  That’s the meat department, and not the counter where you can rent a carpet shampooer.

I could go on and on.

I really hope these complaints get better as we continue up the list, because this stuff is pretty lame so far.  …Yeah, and now watch me go into a Wegmans, get all confused because the deli has been moved, walk out some unknown fire door, and my skeleton is eventually recovered in a ravine ten miles away.

#7  Pay-for trollies I’m not completely sure I know what this means.  I assume a trolley is a shopping cart?  And you have to pay for their use in England, like luggage carts at an airport?  Is that the deal?

OK, I wouldn’t care for that, either.  In fact, I’m getting a little steamed, just thinking about it.  We have a social contract with grocery stores, and in exchange for our business it’s expected that a rolling metal basket with a disease and feces-smeared handle be offered for use, free of charge.  Among certain other amenities.

It’s always been that way, and we want it to continue.  When you start playing around with the fundamentals, you’re asking for trouble, Jim.  What’s next, charging for bags at checkout?  It’s ludicrous.

#6 Lack of stock Yeah, this one hacks me off, as well.  Since I’m usually in the store to pick up only a few items, it’s infuriating when they’re out of business on one of them.

I was once a stockboy, during a previous lifetime, and endured many vein-snapping red-faced diatribes by grocery managers, because the store ran out of some item I was “managing.”  So, I think I’ve earned the right to complain; if I was held to such high standards, so must the current zitsters.

It could be argued that we’re all incredibly spoiled, that we don’t know the true meaning of “lack of stock.”  People who lived through World War II, or who were raised in Soviet Russia, would likely roll their eyes at our terrible, terrible inconveniences.

“Oh, how awful for you,” they’d probably say.  “They’re out of the specific brand of honey mustard dressing you like, and now you’ll have to choose from one of the other ten brands?  It’s your own personal Auschwitz!”

Man, people like that are really tiresome, aren’t they?

#5  Paying for carrier bags You’ve got to be kidding me!  Do they also charge for the receipt in England?  Do they levy a receipt creation fee?  I don’t remember paying for any bags while I was there, and I certainly didn’t “rent” a shopping cart.

I did, however, check out their toiletries.  For some reason I’m fascinated by foreign toiletries, and cereals.

Paying for carrier bags is a valid complaint, I believe.  It would very likely cause me to say some things I’d later regret.  It looks like we’re finally getting into the good stuff.

#4  Unhelpful staff I never ask anyone in a grocery store for help.  It’s a matter of pride.  I’d rather spend an entire afternoon wandering around the place, looking for taco shells or whatever, than admit defeat.

So, I can’t really comment on this one.  I have a feeling, however, that it’s valid.  Most of the people I see working in supermarkets look like they don’t have the energy to swivel their heads on their necks, much less direct me to the “Hispanic” section.

Generally speaking, I’ve learned, when people are introduced into a situation, that’s when it all starts swirling down the ol’ crap catcher.

#3  Short expiration dates Um, perhaps I spoke too soon about finally getting to the good stuff?  I NEVER look at expiration dates.  Until, of course, I take a swig of milk and rainbow-vomit in the general direction of the sink.  Then I might glance at it.

But not in stores.  Do you?  I mean, seriously.

Occasionally I see someone buried to the waist in the milk cooler, looking for a gallon way in the back with a more favorable use-by stamp.  And I mock him unmercifully inside my head:

Bravo!  Bravo!!  Well-played, my good man.  Henry Ford and Thomas Edison have nothing on your great accomplishments.  You’ve unlocked the code for buying slightly fresher milk!  You should call it the Douche Method!

Short expiration dates is the pet peeve of crazy people.

#2  Other customers Yes!  This would go at the top of my list.  In fact, I could undoubtedly break it out into sub-categories and create a Top 50.

Off the top of my head, here are some of my “other customer” complaints:

People who sashay around with Starbucks cups as fashion accessories, just breezing through the store like they don’t have a care in the world, with their colorful neck scarves just so, getting in my freaking way.

Husband and wife shopping teams.  Why?  That shit ain’t natural.  Why do they both need to be there?  It’s not a two-man operation.  One needs to go home, and stop getting in my freaking way.

People with a whole gang of chocolate-smeared children, running around and screaming and being obnoxious.  These are the ones who generally scream at their kids, from one end of the aisle to the other:  “DUSTIN, YOU GET THAT JAR OF PICKLES OUT OF YOUR UNDERWEAR RIGHT NOW!  WHAT?  I DON’T CARE IF IT’S COLD!  GET THE PICKLES OUT OF YOUR PANTS!!  ARE YOU RETARDED OR SOMETHING??”  These people get in my freaking way.

And people who stand in line for ten minutes, and act surprised when it’s time to pay.  As if it had never occurred to them that they’d have to actually pay money for the items they put on the conveyor belt.  They only begin looking for their checkbook, or whatever, when the cashier tells them the final total.  And we all have to stand there waiting, with these idiots in our freaking way.

This category could be a whole other update in itself, and probably has been multiple times.  But I’m sure you get my general opinion on the subject.

#1  Self-serve till machines What?!  Self checkouts are one of the greatest inventions of my lifetime.  They’re fast (but, of course, I understand the highly complex procedure), and I don’t have to make forced chit-chit with some cashier with a BB in the side of her nose, who’s only being friendly because the front-end manager is up her ass about it.

How could this be at the top of the list?  Above “other customers?!”  I sincerely don’t understand.  If you don’t like the self-checkouts, don’t use them.  It’s not a requirement, after all.

Personally though, I love them.  In fact, I avoid stores that don’t offer self-checkout.  And I ALWAYS use them.  Without fail.  Can any of you explain why so many people apparently “hate” them?  I’m completely baffled.

Here’s the article Clive was talking about, and I’d like to get your opinions in the comments section.  What are your “most hated aspects of the weekly shopping experience?”  Tell us all about it, won’t you?