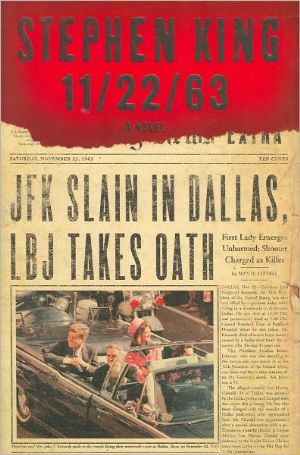 I don’t believe I’ve read a Stephen King novel since I was in my early twenties.  Misery might have been the last one.  Not because I don’t enjoy his books, but because they keep getting gianter and gianter.  His early releases (with the exception of The Stand) are normal-sized, but over the years they’ve all expanded to a thousand pages, or thereabouts.  And that’s intimidating.

However, I pre-ordered his new one, 11/22/63.  It’s a time travel story, and I love that kind of thing.  It released last Tuesday, and downloaded to my Kindle while I was at work Monday night.  On Friday evening I started reading it, and am already 25% finished.  That’s about 250 pages, in dog years.

And man, it’ll suck you in.  I can’t stop reading it.  I got roughly three hours of sleep last night, because of that thing — and an early-morning obligation.  I now feel like I’m walking around underwater, but it was worth it.  I read the coolest scene last night, right before I turned off the light…

King is the kind of writer who makes it look easy.  He uses simple language, in a straightforward way.  It causes a person to believe they might be able to pull it off, too.  But when you sit down and actually give it a shot, you realize just how skilled that mofo really is.  If you’re interested, his book on writing (called On Writing — I told you he was straightforward), is really, really good.

Anyway, I’m enjoying 11/22/63.  However… I’ve noticed characters in 1958 speaking phrases I don’t believe were in popular use at that time.  Like “shopping mall,” for instance.  I could be wrong, but that feels like a 1970s phrase to me.  Before that, I believe they were called shopping centers.  Am I way off?  Also, “lip-synching.”  There’s no way that was a 1958 phrase.  I think it was something that came out of music videos, and the early MTV days.  Right?

Another thing I’m enjoying is the re-launched version of Beavis and Butthead.   It’s exactly like the old version, and it still makes me laugh.  I saw one last night where they wandered into a room on an Army base, while on a field trip, and began playing around with drones flying above the Middle East.  They believed it was a video game, and comedy ensued.

The show is still great, in my opinion, and I look forward to new episodes every week.  And I’m already re-watching the ones I saw last week…  Mike Judge can do no wrong, as far as I can tell.  Even The Goode Family rocked.

And finally, I saw an interesting documentary on Netflix a few days ago.  It’s called Winnebago Man, about a guy who spewed profanity while making a sales video for Winnebago, back in 1989.  Someone put together an outtakes collection, and it went viral, during the VHS days.  Now it’s on YouTube, and the makers of the film went in search of this angry “Winnebago man.”  It’s a good movie, and really funny in parts.

What are you enjoying these days?  Is there anything good we should know about?  Please tell us in the comments section below.