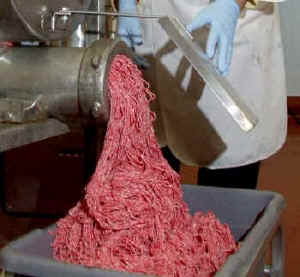 A few days ago I asked you guys about your first real jobs.  And it turned out to be a fun exercise.  So, today I’d like to talk about the most disgusting and/or alarming things we’ve ever been forced to do at work.  I’m not sure if we’ve covered this one before.  But it doesn’t really matter, does it?

That shitho- I mean, grocery store had a room on the rear of it, out near the alley, which was only accessible from the outside.  It was known as the “trash house,” and the produce guys and the meat department alcoholics would shove carts of disgusting nastiness out there, unlock the door, and underarm it into the room.

I don’t remember there being any trashcans inside, they’d just hurl shit through the open door, and slam it shut.  I think they’d occasionally fling gallons of spoiled milk in there too.  So, it would be a complex tapestry of rotting meat, heads of decomposing cabbage, and puddles of slick-as-snot “cottage cheese,” and whatnot.

Here’s a recent photo of the place.  That little section way at the back, where the roof drops down, used to be the trash house.  It looks like the door is now gone, or maybe they moved it around to the alley?  I don’t know.  But there used to be access from the parking lot, and one day another guy and I were told to “clean out” that crime against humanity.

And I admit that I didn’t contribute much to the project…  I was convinced we were going to uncover a rat colony, and my lower jaw kept retracting every time something was moved, and new packet of funk was released.  We were given snow shovels to complete the task.  Blecch.

At the same store I was occasionally asked to grind hamburger at night, if the meat case became empty during my shift.  That wasn’t so horrible, except for the giant barrel of fat they kept back there.  Apparently it was the stuff cut off other pieces of meat throughout the day, and it was added to the ground beef!

I remember the first time I was grinding burger, the meat manager was watching me.  And he kept screaming, “More fat, goddammit!  More fat!!”  And I’d drop my hand into that cold barrel of quivering animal fat, and transfer it to the grinder.  It was stomach-churning.

Every once in a while there would be a loud popping sound, and something would SHOOT out of the grinder and stick to the wall.  I have no idea what that was about, and don’t want to know.

And in the alarming category…  They’d make me climb up on the roof, and change a cheap-ass sign that used to be up there.  I’d have a stack of plastic letters in my arms, and a piece of paper with stuff like CLOROX GALLON 79¢, and that sort of thing written on it in an alcoholic scrawl.

Here’s the picture again.  Above the door used to be a flat surface.  That fancy metal roof wasn’t there, it was just flat.  And below the big red sign was a smaller one, where I’d have to maintain the weekly specials.

During the winter the whole overhang would be a sheet of ice.  Several times I almost went off backwards, and it scared the hell out of me.  I dreaded Sundays, because that was the day I was convinced I’d be rendered a paraplegic, possibly with a big plastic T severing my liver.

I hear the store has cleaned up its act since I worked there in the early 1980s, so I don’t want to imply that things are still like they were.  Hell, I haven’t been inside since Clinton’s first term, so what do I know about it, one way or the other?  I thought I should make that clear…

And now I’m going to turn it over to you guys.  What’s the most disgusting and/or alarming things you’ve ever been asked to do at a job?

Toney tells a great story about being ordered to clean the men’s room at a record store in Atlanta (Sound Warehouse — Buckhead), and somebody had power-blasted diarrhea all over the place.  It was on the walls, the toilet tank, everywhere.  Plus — get this — there was a wadded-up pair of underwear stuck to the wall, using the liquefied poop as a sealant. She refused, they threatened to fire her, and she said go ahead.  Finally somebody else was bullied into the task.

Do you have any stories to tell on this subject?  If so, please use the comments link below.

And it’s snowing like a sumbitch outside… I’d better start preparing for my white-knuckle journey to work.