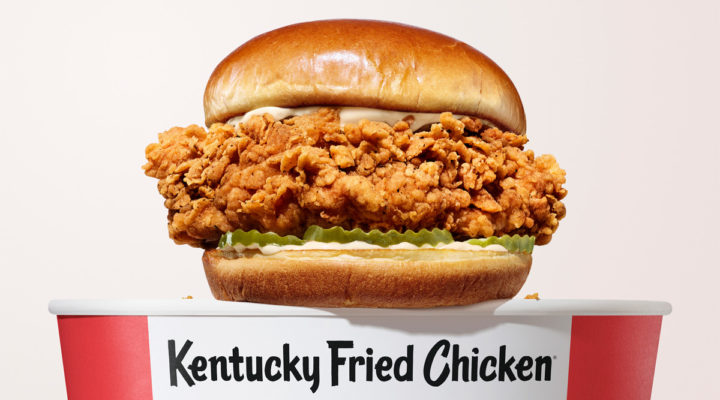 I apologize in advance. This one is going to be a quickie, ’cause I gots no time. As I type this, the younger boy is heading over to KFC to purchase, on my behalf, their much ballyhooed new chicken sandwich. My instructions: If it comes in a meal, get the meal. If not, just get that deep-fried poultry ball as a standalone. “Um, OK,” was his puzzled, but used-to-it response. As soon as it arrives, I’ll go upstairs, try it out, and return to the bunker for my review. How’s that sound?

Have you tried this thing? What are your thoughts? When everybody was whipped into a frenzy about the Popeye’s chicken sandwich, I tried it a few times, and thought it was fine. Actually, pretty good. But nowhere near as tasty as Chick-fil-A, and much saltier. I’ve had the Popeye’s sandwich maybe three or four times now, because people at work love ’em, and don’t really have a need to ever eat one again. I sort of enjoy it while I’m having it, then feel my blood pressure spiking due to the sodium load. It’s fairly disgusting.

I’m back. He was able to secure a meal, and chose Coke as the drink. Here’s the reality pic: 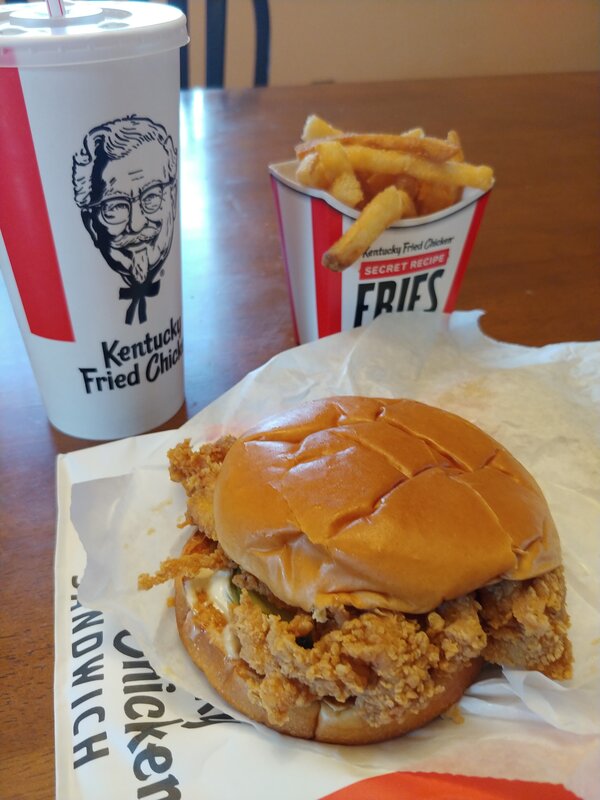 It was decent, but I’m not blown away. The chicken is extra-crispy, and there’s mayo and pickles on it. The bun is supposedly buttered, which is a nice touch. But is it better than Chick-fil-A? Ha! That’s my answer. It’s bigger, and probably cheaper. But not anything super-special. It’s a standard-issue fast food chicken sandwich. I took a couple of bites with the pickles, just to get the full experience. Then I plucked those nasty bastards off. I could still taste the residue, but it was now a muted nastiness.

I don’t know. There’s so much chicken sandwich hype. This thing is fine, definitely not terrible. But it’s not as good as what you could get at Wendy’s for the last hundred years or so. I feel like there might be a salt issue with this one, too. I can already feel it taking hold. Also, there was a stringiness that was slightly off-putting. Every time I took a bite it was still tethered to the mothership, if you know what I mean. I had to move the sandwich far away from my mouth to snap the cord. Not great.

Apparently Burger King is coming out with a new chicken sandwich, as well. I don’t know if it’s out, but I do know I haven’t tried it. Here are my rankings, so far:

1. Chick-fil-A (with a bullet!)
2. Wendy’s Homestyle (available since the Carter Administration, or some shit)
3. KFC
4. Popeye’s

The last two could flip-flop and I wouldn’t have an issue with it. Six of one, half a dozen of the other.

What are your thoughts on this important issue? How would you rank the FAST FOOD chicken sandwich? I put fast food in all caps, ’cause I’m not talking about some diner on the outskirts of Tulsa that “does” the best chicken sandwich in the world. I’m talking about shitty fast food, OK? Chick-fil-A is easily the best, in my opinion. And the tried and true Wendy’s Homestyle is better than any of the new interloper sandwiches. Right? Right. Please share your thoughts.

And if you didn’t have a chicken sandwich for lunch, what did you have? We need to know.

I have to go to work now. One more day of “opportunities” to navigate, then two glorious days off.