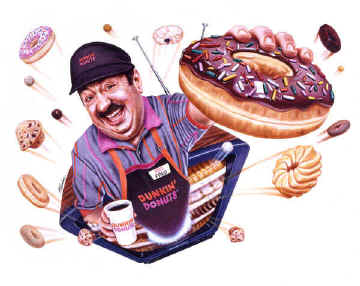 On Saturday evening Toney and I were watching Friday Night Lights, and enjoying a few Anchor Steams.  As I sat and sucked a sizable hunk of enchilada from between two molars, I began reviewing what I’d eaten during the day.

It started with three(!) Dunkin Donuts, and about six cups of coffee.  I shake my head in shame as I type these words, but it’s true.  The amount of coffee is standard, but Toney went to the grocery store early, and stopped by DD on her way home.  She had a coupon, she said.

Toney won’t eat donuts, she says they’re “disgusting,” but the boys and I ripped through that dozen in short order.  When the cloud of sugar glaze settled, there was one lonely ring o’ goodness left in the box.  All of us wanted it, but nobody likes to be held responsible for rendering the house donutless.

Yes, a donut frenzy almost always ends with one left in the box.  I think John Adams said that.

And before I move on to “lunch,” I have a terrible confession to make…  When it gets right down to it, I think I prefer Dunkin Donuts glazed to Krispy Kreme.  There, I said it!  I’m sorry, so very very sorry.

Around noon we went to Sam’s, the exclusive club Toney and I belong to.  I perused their books, CDs (I seriously considered a two-disc Hall & Oates collection, but just couldn’t do it, probably because of the disturbing cover), and DVDs.  Then I wandered over to the snack bar and ordered two hot dogs, and one of their two-hander soda cups.

I squirted mustard on both hot dogs and, as always, the distribution was way off.  There was much more mustard on one end of the wiener than the other. I blame it on the condiment pump; those things put out nothing or way too much.  It’s frustrating.  I had to use a plastic knife to smear it all around, and somehow got a gob of it on my jacket sleeve.

After Sam’s we went to Target, where I bought a Kit Kat and snorkled it down before we reached the car.  I’ve heard rumors of people finding a Kit Kat finger with no wafer inside:  just solid chocolate.  So I’m always hopeful, but so far disappointed.

Is it a myth?  Have you ever had a waferless Kit Kat?  Or is it the candy bar equivalent of Bigfoot, or fun at the opera?

Since we were in the neighborhood we went to Wegman’s to buy a six pack of some sort of fancy-ass microbrew.  We stood in front of the giant wall of greatness, and decided to go with Anchor Steam — a beer we loved during the Atlanta era, but hadn’t purchased in years.

For dinner Toney made enchiladas (yum), and a big mess of nachos.  By the end of the meal I was starting to founder, and waddled down to the fambly room.  There I snuggled ‘neath the Scrote-watcher, drank beer, and tossed dry roasted peanuts into my mouth.

So, there you go; it’s how I’m able to maintain my powerful upper body.  I had donuts, coffee, two huge emasculation dogs, a Kit Kat bar, beer, nachos, and enchiladas. And nothing else.

What did you eat on Saturday?  Can you remember?  Please tell me I’m not the most unhealthy among us?  Use the comments to make me feel a little better, won’t you?

And I’ll see you guys tomorrow. If my heart cooperates.