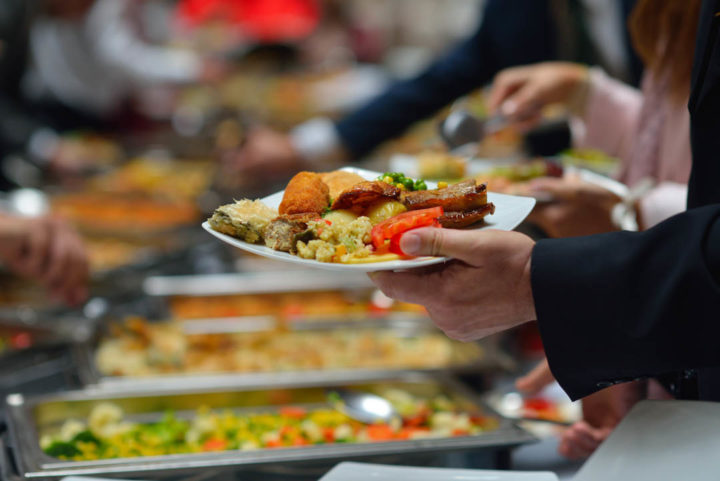 I know there’s a lot of snobbery when it comes to buffets, and that’s because many of them are terrible and attract shouty people in Ocean City 2017 shirts with buzzcut hicklet children named Colt, and whatnot. Indeed, places like Old Country Buffet and Golden Corral are one step up from school cafeterias, and that’s impossible to defend. However… there are good alternatives, and folks should not paint with too broad a gluttony brush.

On the latest episode of the podcast I talked about an amazing buffet Toney and I visited on Friday. It’s located in the heart o’ “Amish country” and is called Shady Maple Smorgasbord. It had a distinct Las Vegas-feel, with the sprawling dining room and grand mal-triggering carpet. And the buffet itself was enormous — roughly the length of a football field, it felt like. In addition to that impossible spectacle they had several kiosks where you could get made-to-order burgers, hot dogs, cheesesteaks, NY Strip steaks(!), and many other things. It was crazy!

After we paid our entrance fee (just $15 each during lunch hours) and was assigned a table, we went to work. And mister, the shit was good. At a lot of those types of places you can tell some of the vegetables are from a can, and plenty of corners were cut across the (smorgas)board. But not here. Everything tasted like it was straight outta grandma’s kitchen. The pot roast, in particular, was perhaps the best I’d ever tasted. I hope my mother isn’t reading this…

I’d been hearing about this place for years, but Friday was our first visit. It’s about two hours from our house. Heh. Have you ever driven two hours to eat lunch at a buffet? In any case, I told Toney in advance that I planned to get my money’s worth. I was doing mock stretches in the parking lot preparing for battle. And I did some decent damage, but wasn’t totally happy with my performance. I hit the wall after a small garden salad and three sizable plates of food. It felt like a true professional would’ve been able to push through the pain. I was beating myself up for quitting at the first sign of trouble. Sure, I believed I might vomit or shit myself, but have a feeling that’s what separates the men from the boys. Once your body threatens to revolt and eject something in protest, or the hallucinations start to kick in, it scares the amateurs and they abort the mission. True nirvana is reached only after you summon the strength to push through the terrifying part. And I behaved like an amateur.

I did, however, have two desserts. So, I’m proud of that. I can’t say I really enjoyed either of them, but made them disappear via sheer stubbornness. Later I nearly passed out (and I’m not joking in the least) during a tour of the Troegs Brewery in Hershey. I went into detail on the podcast, but it had to do with the fact that I was loaded to capacity with mashed potatoes, gravy, beef, and apple cobbler, plus a “welcome beer,” and an incredibly hot room where they store the grains and barley in that place. I’m not kidding, I thought I was going to collapse. But I maintained…

What are your thoughts on the buffet? And what are the best ones you’ve ever encountered? When we were in Vegas we had breakfast at one every morning, inside the Mirage. It was shockingly expensive, but also top-notch. They always asked if we wanted to add “unlimited beer and wine” for an additional $15 each. It was 9:00 am! Also, there’s a giant seafood buffet in Myrtle Beach that the boys love, called Crabby Mike’s. They go into some kind of wild frenzy there. I’m not really a seafood kinda guy, but appreciate the over-the-top abundance in that place.

What do you have on this subject? Please share in the comments.

And I’m going to try to get back on track with these updates. I’m not even sure what happened, and the excuses don’t really matter anyway. I’ll do better.