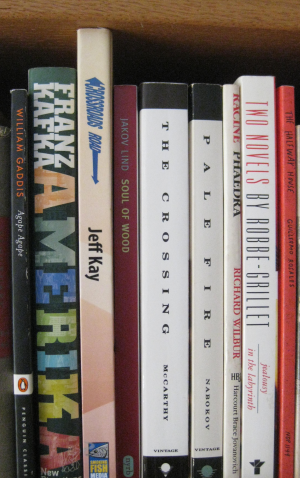 As far as I know, there are only three things that might cause a lawnmower not to start:  spark plug, air filter, bad gas.  Am I missing anything?  ‘Cause I’ve officially reached the running my hands through my hair phase of this ordeal.  Grrr…  Why must everything be so difficult?  Every single thing?

Our yard now looks like Malcolm in the Middle, and I can’t do anything about it.  It’s simply fantastic.

There’s a lawnmower fix-it shop in town, but the guy who runs it is a disagreeable fuck.  Every conversation I’ve had with him left me infuriated.  Plus, his turnaround time is roughly a month.  What am I supposed to do in the meantime?  I don’t have a fleet o’ mowers in my garage.

Any idea what might be wrong with my mower?  It’s worked all spring, until last weekend.  Now it won’t start, and it’s making me crazy.

Remember the Smithereens?  Yeah, I was always a fan, and their new record is shockingly great.  It’s their first album of original music since 1999, and it’s one of their best.  It’s been on perma-repeat in the bunker for a week.  I can’t get enough of it.  Good, good stuff.

I like when a band from back in the day comes up with one of their best albums ever, at an improbable late date.  Like this one, for instance, or this one.

Can you think of others that might fall into that category?  Tell us about it in the comments.

That picture at the top of the update is compliments of Will, the keeper of the Blanket.  He wanted to show me that Crossroads Road is now rubbing shoulders with Kafka.  Pretty cool, huh?

If you’d like a signed copy of my crazy-ass novel, here’s the PayPal link again:
.

I’m almost out of books, and this will probably be the last time I mention this for a while.  So, if you want one, today’s the day.

And you know those vent lines, set up by radio stations, TV channels, and newspapers, where assholes can call and complain about something?  Well, check out this impassioned rant.  At least I think it’s impassioned…  I’m not really sure.

That little gem is from a Morgantown radio station, and comes to us via the vast network of liars and backstabbers.

Several Surf Reporters sent me a link to this story, and for good reason.  Exercise ball sex fetishist?  What a golden legacy the man will leave behind…  His time here on Earth will have meant something.

How does that happen…?  Seriously.  Exercise balls??

I need to cut this one a little short, boys and girls.  I’ve got “problems” weighing heavily on my mind.  Starting with that non-starting mower.

I don’t really have a Question.  You can comment on the stuff above, or just tell us about your weekend plans.  The weather up here is incredible, pretty damn close to perfect, in fact.  Do you have anything planned for this perfect weekend?  Tell us about it, won’t you?