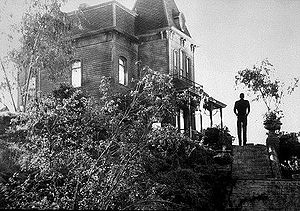 Another late start, my friends…  I apologize, but real life has a way of sometimes screwing up my virtual world here.  So, let’s do our annual October survey of favorite — and scariest — horror films.  What do you say?  I can do that one quickly, and you guys can take up my slack, again.  You know, if you wanna.

Here is a fresh list of the Greatest Horror Films of All-Time, as chosen by “leading directors and stars,” whatever that means.  It’s not a bad list, but I don’t consider Jaws to be a horror film, and the same goes for Dawn of the Dead.  Those are action movies, right?  I’m not sure they fit the category.

And maybe I’m admitting too much about myself, but I’m unfamiliar with Suspiria.  Never heard of it.  Gasp in shock and sadness, if you must.

I like The Shining, Halloween, Psycho, and (if we’re including zombie films) Dawn of the Dead.  In fact, Dawn of the Dead is one of my favorite movies, period.  I’ve probably watched it ten or twelve times, and it’s a masterpiece of cartoonish gore and mayhem.  Incredibly entertaining.

My other favorite zombie flick is 28 Days Later.  I recommend it without hesitation.

But the movie that scared me the most doesn’t appear on the list.  And I admit… it’s not as scary now as it was when I was twelve.  But it’s still pretty creepy, and a really good flick.  And that’s Black Christmas — the original, from the 1970s.  I know there’s a remake, but I’ve never seen it.  I’m talking about the one with Margot Kidder, from 1974.

That movie used to be in heavy rotation during the early days of HBO, and was always broadcast as Stranger in the House, for some reason.  The first time I watched it, I nearly soiled my Towncrafts.  Heh.

There’s a twist in the tale, as they say, near the end of the movie, and it messed me up — for a good long time.  The “prank” phone calls are scary, too.  Weird shit, man.  I lost actual sleep as a result of that movie, and I can’t think of any others I can say that about.

To tell you the truth, I don’t really like movies like The Omen.  That’s not my kind of horror film.  All the chanting and candles and creepy children and religious overtones…  It goes over the line with the freakiness, to the point where it’s no longer fun.  Does that make any sense?

I apologize for this quickie update, written like an email, but it’s better than nothing.  Maybe.  And I’m going to turn it over to you guys now.

In the comments section please tell us your favorite horror films, and also the one that scared you the most.  And if you have any opinions about the Top 10 list linked above, we’d like to hear about that as well.

And I’ll be back tomorrow, and will try it again.