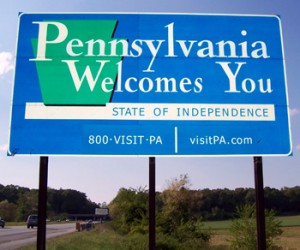 We lived in Southern California for four years, and there were a few positives, and a whole barge-load of negatives. The best thing about it was the neighborhood we lived in. Everybody was roughly the same age, with young kids, and we all got along somehow. It was a great little community.

However, Toney and I were generally unhappy in SoCal because of other things. Our job situations, the ridiculous commute, the expensiveness of it all, the unceasing crush of humanity, the constant heat… It sucked ass, but once the workday was over, it wasn’t too bad. And so, we endured it.

One day I was sitting in yet another meeting at work, around a giant conference table in Burbank, and a director from a sister company passed me a note. What the? I looked at him, and unfolded the piece of paper. It said, “Would you ever consider moving to PA?” I gave him the international sign for call me, and before I knew it… we were preparing to move our family to Northeastern Pennsylvania.

The company offered to fly us out here, and put us up for a few days, and I told them it wasn’t necessary. We’d take it, sight unseen. I just wanted to get back to the east coast, normal weather, and a sane cost of living. Plus, I was getting a $20K raise! Shit man, I didn’t need to see it. Just sign me up.

We sold our house in Canyon Country, CA for a nice little profit, and I came out here a few weeks early to start looking for a place to live. I hooked up with a real estate agent I found online, and she was sweet and friendly.

But she said some things in our initial consultation that surprised me. She told me we’d probably want to focus our search on a certain town, where most of the transplants end up. I asked her why, and she said some of the people around here are not exactly welcoming to “outsiders.” Most of these towns are full of families who have lived there for generations, she told me, and they can be quite “cold and cruel” to people they don’t know.

Holy shit, I thought. Cruel? What were we getting ourselves into? I told her to only show us houses in the town she suggested — it had the highest rated schools, anyway — and we’d try to avoid the shunning, or whatever.

Within a few days I’d found a perfect house for us. It was on a level lot, was the right size and price, and had been well-maintained. As I toured it with my agent, the owner asked me a lot of questions. He had a thick-ass NEPA accent, and used unknown phrases like “cuppa two tree.” But I was excited about the house, and was willing to endure the grilling. I was nothing but friendly to the guy.

I returned a few days later, and took a bunch of photos. I emailed them to Toney in California, and we agreed we should move on it. It was perfect, and we didn’t want it to get away from us.

They were asking $150K, and I didn’t even negotiate. I offered them the asking price, pending an inspection.

And the guy rejected my offer! I couldn’t believe it. I asked the agent for an explanation, and she clearly didn’t want to go into it. “Let’s just keep looking,” she said.

But that wasn’t going to pacify me. I wanted to know what in the pan-fried hell was going on, and told her I was going to speak with the owner directly. She acted alarmed and said that wouldn’t be a good idea (WTF??), and finally admitted he didn’t want to sell to an outsider. I stood there and blinked about fifty times, as I considered this insanity. And we were in the town where this stuff wasn’t supposed to happen! What must it be like in other places?

“Is that even legal?!” I sputtered.

“Do you really want to go down that road?” she asked.

It didn’t take long for us to find an acceptable house owned by people who didn’t give a crap where we were from. And we still live there today.

And that first house? It eventually sold, too. For $145K! Five thousand less than what we offered. Have you ever heard of anything so crazy? It’s been 13 years, and it still makes me shake my head in amazement.

Have you ever encountered such a thing? Anything similar? What are your thoughts on this wacked-out tale? Use the comments section below.