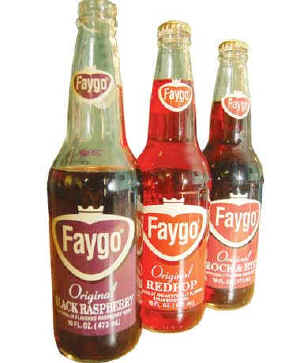 I got a powerful urge for a Mountain Dew at work last night, as so often happens, and made the long walk to the vending machines with Dewy visions dancing in my head.

The machine with the glass front didn’t have anything I wanted, so I moved to the more traditional vend-o-matic.  The drinks are $1.25, so I inserted two one-dollar bills.

Then I hit the dinner plate-sized button, and two dollars worth of nickels came out of the coin return.  WTF?!

It took a full minute for them all to be deposited into the reservoir, and co-workers were looking at me with puzzled expressions.  “What’s that idiot doing now?”  You know, something along those lines…

I then had three pounds of money, and still no soda.  So I returned to the glass-front machine, now having to carry my loot in two cupped hands, and realized I’d have to settle for one of the novelty Dews — Typhoon, to be exact.

So, I started feeding in the nickels, and it took a good long time to reach $1.25.  I think I switched hands at one point, because of cramping.

Then I pushed the appropriate button, and the bottle jerked and moved forward a little, but didn’t fall.

“Oh no you don’t!” I hollered, and put my shoulder into it, as an unknown woman from another department walked past.  When I made contact with the machine, I slung six or eight of the remaining nickels all around the woman’s feet.  And she just shook her head, and kept walking.

But the drink dropped, dammit.  I had my Dew.  Unfortunately it tasted like a rose bush, and people at work have further evidence against me.  Oh well.

I really like one of the new novelty Dews: Distortion.  It’s pretty much like regular Mountain Dew, but with an extra blast of lime.  It’s good stuff, I think.  And White Out tastes almost exactly like Fresca.  I can deal with that.

But some of them are too strange for me.  Typhoon isn’t very good, and the Windex-colored one is weird, too.

Remember back in olden times, when there were roughly a hundred different flavors of Faygo soda?  Maybe they still make it, I don’t know.  But they had all sorts of unusual flavors, like, possibly celery.  Or green onion.  Did you ever drink that stuff?  What was yer favorite bizarro flavor?  I thought the baby aspirin flavor was pretty good.

In fact, can you remember having any weird flavors of soda, regardless of the brand?  Tell us about it, won’t you?  Also chips…  Have you tried any baffling flavors of potato chips?  When we were in England they had some stuff that blew my mind.  I tried a few, and with the exception of “roast chicken” they all made my lower jaw retract.  Blecch.

Do you have anything on this?  Use the comments link below.

And speaking of olden times, do you know anybody who uses antiquated phrases in their normal everyday speech?  Especially people who are too young for such things?

I regularly speak with a woman (purposely vague) who describes people as “colored.”  And she’s younger than I am.  I also hear a lot of people say “tin foil.”  Tin?  What is this, 1947?  And I used to work with a man who referred to his home stereo as a “hi-fi set.”

Do you ever hear old fashioned phrases like that?  If so, we need to know.

And I’m going to call it a day here.  Tomorrow’s update will be my last for a while.  I’m going into the final sprint on the second draft of my so-called book.  But I’m trying to get some guest columnists to take up my slack for next week.  So far I have three confirmations, and I think you’re going to be pleased with the lineup.

I’m going to work now, where it will probably be slightly too hot for the entire night, which will put me in a bad mood, and everything will cycle downward from there.