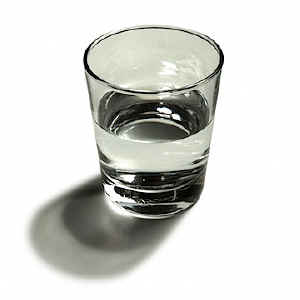 The moment we sit down to a meal at our house, the older Secret drains his drink.  Without hesitation.  It just disappears in a single extended gulping session, and the whole thing bothers me for some reason.

Toney can’t understand my irritation, and we sometimes have low-grade arguments about it.  “Why do you care?” she asks.  “Because it’s ridiculous,” I say.

I don’t think he’s doing it on purpose, or trying to be wacky, I believe it’s just a habit.  And I often say, “You know, you can drink water throughout the day.  You don’t have to wait until mealtime.”  And everybody gets irritated with me.

He does it in restaurants, too.  The waitress brings our drinks, and his glass has nothing but ice cubes in it before I’ve had a chance to get the wrapper off my straw.  Then I roll my eyes, Toney rolls her eyes at me rolling my eyes, and the Secret mutters, “Sorry,” in the exasperated tone of a teenager.

It’s an ongoing issue: not a huge deal, but something that succeeds in getting under my skin, and causing sporadic tension inside Chez Kay.

Of course, I do something along the same lines – and get kinda pissed when someone makes a comment about it.  So yeah, I’m a hypocrite.  What of it?

At the end of my meals, you see, I almost always leave one bite on my plate.  Everything is cleaned and shiny, except for one remaining forkful of food.

“Why don’t you eat that?” Toney says.

So it gets scraped into the garbage disposal, right behind a huge sigh of irritation.  But I don’t do it on purpose, I swear I don’t.  In fact, I’ve left one bite my entire life.

I remember when I was a kid my grandmother had a BIG problem with it.  She grew up during the depression, and all that stuff, and it pained her to throw away food.  I think she would sometimes wrap a single pinto bean in Saran Wrap, to heat up later.  But I could be a little off on that memory…

In any case, my granny and I would go round and round about that last bite.  But I couldn’t eat it, the thought of it made me sick — only the final bite.  Wonder what a psychiatrist would say about that?  Any of you care to guess?

And do you, or anyone you know, have a weird lifelong food habit you’d care to report?  Are you aware of anyone else who eats his meal right up to the last bite, and can’t go any further?  Like, every single time?  Use the comments section below.

And this is a catch-up (not ketchup) update, since I couldn’t get it done on Monday.  I’ll try to post something late in the afternoon on Tuesday, as well.  I’m going to be out of town on Thursday/Friday, so it’s already going to be a short week here…