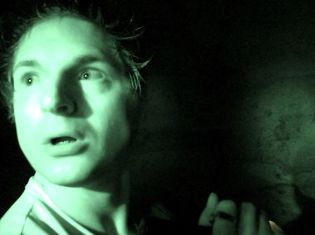 I was going to update on Tuesday afternoon, but your stories were coming fast and furious, and I didn’t want to disrupt things.  Lots of great laughs yesterday… You guys are awesome.

The Half-Shirts had their annual Memorial Day party on Monday evening, and it was a raucous event, as usual.  It sounded like there were forty drunken old ladies over there, shrieking and whooping it up.  I’m almost certain there were plenty of men there too, but we could only hear the women.  And they were still swinging for the fences at 1 a.m.

Why do they always have it on Monday night?  Doesn’t it make more sense to have it on Sunday, so you could use the next day to rehydrate and liqui-shit yourself back to normal?  That’s what I would recommend, but they never ask for my opinion.  You know, since they both hate me with the intensity of a thousand suns.

And speaking of that… It’s been crushingly hot up here, and we haven’t yet dragged the five (five!) Soviet humbox air conditioners up from the basement.  I almost pulled the trigger on Saturday afternoon, but the heat weighed me down like a queen size comforter soaked in sea water.  The heat poisons you, drugs you, and renders you incapable of banishing it from the premises.  It’s similar to those weird spiders from South America that paralyze your ass for an hour or two, so you can’t kill them.

On Sunday night it was so hot I was thrashing around in the sheets, unable to sleep.  Then a brief thunderstorm rolled through, and Andy (Black Lips Houlihan) got scared by the thunder and jumped up on the bed.  And he pressed his entire heft against me, thus raising my body temperature another five to seven degrees.  He was a vibrating heat-pump covered in fur. I was in absolute hell, and Toney was inches away just snoozing on through the night.

I haven’t had a beer in many days, because I’m trying to be more productive.  And it’s working.  How sad is that?  I’m also reading like a maniac.  I’ve ripped through two complete books over the past ten days, on my Kindle, and that’s fast for me.  I always have the best of intentions, but usually end up reading one page before conking out for the evening.  And it takes a long time, only reading one page per day.

I’m limiting myself to just one Mountain Dew per night at work, as well.  The rest of the time I drink water.  So, no soda and no beer… my jeans are already loose.  It’s crazy how fast the pounds start falling off, by just making a minor adjustment.  I feel pretty damn good.  It’s a shame I won’t stay the course.

A few nights ago I was watching Ghost Adventures with the boys, and it was one of those episodes where not much happens, so they have to pad it with a bunch of bullshit.  Know what I mean?  Like during the Gettysburg episode, when they were dressed up in Civil War uniforms, and lounging around a camp filled with reenactors.  What the hell?  Aren’t they supposed to be hunting for ghosts?  I’m not giving up my valuable time to watch some idiot eat beans off a metal plate.

And by the way… how shitty of a ghost hunter must you be, not to find anything in Gettysburg?!

The one on Friday was at a house in Kentucky which was built by an evil man who owned, and abused, slaves.  Or so the story went…  And since nothing too exciting happened during the show, they filled in the gaps with elderly people singing mournful spirituals, and standing off in the distance with their arms straight down at their sides.  They also had an obese man in tribal dress come in and splash water around, as part of some sort of religious ceremony.  After it was over everybody cried, for reasons that remain unclear.

Why do I continue to watch Ghost Adventures?  It irritates me greatly, every time.  I’m still hoping to see an episode where that Zak character is taunting the spirits, and a fork comes sailing out the darkness and sticks in his neck.  Perhaps that’s what keeps me coming back, I’m not sure.

During the show we saw a commercial for some sort of ludicrous product that purports to lift droopy eyes.  Following a litany of amazing promises, and many before & after photos, they revealed what you get for your twenty bucks or whatever:  a sheet of clear stickers that you’re supposed to put on your eyelids.  I busted out in laughter.  People will buy anything, won’t they?

Maybe I’ll test it out with some of the free return labels those nice cancer people keep sending me?

After that one, there was an ad for a bunch of cheap plastic slats that you’re supposed to put under the cushions of destroyed, fully-collapsed couches and chairs, to make them seem new again.  Near the end of this laugh-out-loud abortion of an offer, two so-called Sumo wrestlers are brought in to sit on a newly slatted-up couch, and demonstrate the strength of the product.  Only they aren’t Sumo wrestlers, they’re just a couple of really fat black guys.

I love the old man who struggles to rise to a standing position pre-slats, then SPRINGS to his feet post-slats.  And the bonus couch-pouch is a nice touch, as well.

Have you ever bought anything off those types of TV commercials?  What was it, and what’s your review of the product?  Please tell us about it, won’t you?  Use the comments link below.  It’s our Question of the Day.

Also, if you know of other hilarious TV commercials for questionable items, please describe them, or provide YouTube links.  I don’t watch much TV, and need to get caught up on this important side of things.

Plus, who hates you, like the Half-Shirts hate me?  Is there anybody who doesn’t even try to hide it?  Please tell us that story, if you’re so inclined.

And I’m gonna call it a day, boys and girls.