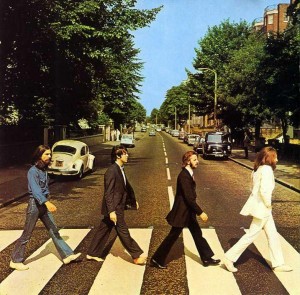 So, I’m sitting here watching the Abbey Road cam, which serves up live streaming video from the British crosswalk made famous by the Beatles.  And I see one group of tourists after another going across that thing, and really douching up the joint.

It reminds me of a woman in New York City a few years ago, who I saw shove through a bunch of gawking out o’ towners, and shout, “Why don’t you people go back to Wisconsin already?!”  Heh.

Can you imagine being a driver in London, late for some appointment, and coming upon that intersection of dipshittery?  My blood pressure is rising, just thinking about it.  I’d never actually do it, of course, but I’d be mighty tempted to mash the accelerator and let the chips fall where they may.

No, I don’t really want to see anyone get run over by a car.  But as I sit here watching this spectacle on my computer, I would like to see a gang of tourists from Ohio, or wherever, scattered in every direction by a careening black cab.  I can imagine their fannypacks and love handles bouncing as a result of the rare exertion, and this vision makes me happy.

There’s nothing wrong with being a tourist, of course, but maintain a little dignity.  Is that too much to ask?  That Abbey Road crossing is almost as bad as this crap.  Sweet sainted mother of Shitbox Wally…

But the Beatles cam is pretty damn good, isn’t it?  I remember in the early days of the internet they looked like surveillance video at a convenience store.  And some would only refresh every minute or so.  I’ve always found them fascinating, though.

There was a bar in Poland that I used to check out occasionally, and I thought it was the coolest thing in the world to see guys sitting in there downing beers, from my chair in Scranton.  I wish I still had that link…  I wonder if the cam is still up and running?  I wanted to go there someday, and now I can’t even remember the name of the city.  Oh well.

One of my all-time favorite cams is no longer in operation:  the Happy Wash laundromat in France.  Man, that was a good one.  When I worked my previous job I’d sometimes leave the video feed open for an hour at a time.  It was oddly fascinating to watch unsuspecting French people fold bras.

Do you have any favorite webcams?  If so, please share the link with us.  And if it’s disappeared, why not describe it?

Let’s also start a wish list for webcams…  Where would you like to see one?  An interrogation room of a big city police department?  The Oval Office?  The Kremlin?  The rectal ointment aisle of a Rite-Aid store?

Help me out with that one, won’t you?  And let’s not worry about laws or any of that pesky crap.  Just let yer imagination run wild.

And finally, where have you encountered the most obnoxious tourists?  I remember a gang of incredibly rude and pushy French people at the Tower of London.  They were so bad Toney was attempting to body-check a few of them into a stone wall.  Hilarious.

So, if you have anything on that, please use the comments section below.

And I’m going to call it a day here.  I probably won’t update again until Sunday, but you never can tell.  I plan to put in about thirty hours of work on my book, over the next three days.  But if it all goes down the ol’ poop-catcher for some reason, I might return for a short whine.

If any of you’d like to buy me a beer or three for Saturday night, here’s your link.  I’d really appreciate it… It’s been a bad summer, my friends, and Saturday nights are usually a rare exception.