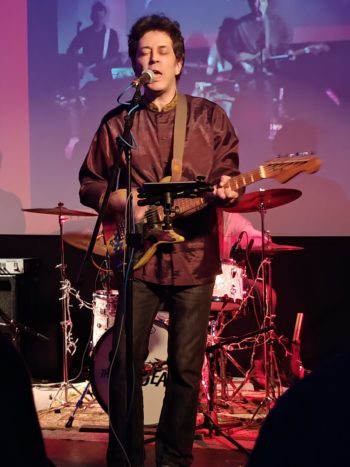 We made it to the show in Philly yesterday, and even more miraculously… made it back home early this morning. Was it fun? Well, the show itself was great, but everything else was fairly shit-spangled. If this doesn’t earn me a bunch of “true fan” points, I don’t know what will. And we all know how useful those true fan points are.

All weekend I was obsessively checking the weather websites, hoping to get some good news about the snowstorm that was threatening to derail the whole operation. And it looked like it was turning in our favor by Sunday morning. The “event” had been drastically downgraded to 1 to 3 inches almost everywhere. The one outlier? Accuweather. They were still saying BAD TIMES FOR JEFF KAY. I’m pretty sure that’s how they reported it. So, there was no consensus, and even if there was… could you trust it? I think not.

But my son and I took off around 3 pm, and it was snowing almost immediately. I had a bad feeling, but I wasn’t going to be dissuaded. I’ve been waiting 35 years to see these guys. Why today, though?? Why is this shit happening at the exact time I need to be driving? It feels like it’s being done on purpose somehow. What’s going on?! It was what’s known as a wintry mix all the way to Philadelphia. It didn’t cause me any major problems, but it was enough to keep the deep, deep concern a-simmerin’.

We arrived way early but checked out the venue and parking options. And there didn’t seem to be any of the latter. The neighborhood looked sketchy, and I didn’t want to be hoofing it for blocks at 11 pm. Ya know? I had no idea what we were going to do about that, but didn’t want to just keep driving round and round in snow ‘n’ sleet, so we went off in search of a place to have dinner. And we ended up inside an episode of The Wire. I mean… just straight up ghetto. Fantastic!

After a few minutes of hangin’ with Bubbles and Stringer Bell, I told the boy to just punch Jim’s Steaks into Google Maps, and we’d eat there. At least that’s in an area where there’s only a 30% chance of death and robbery. Sheesh. So, we drove over there, through that shit mix, and I was getting nervous because it was starting to stick on the roads. What’s it going to be like at 11? This is complete bullshit. 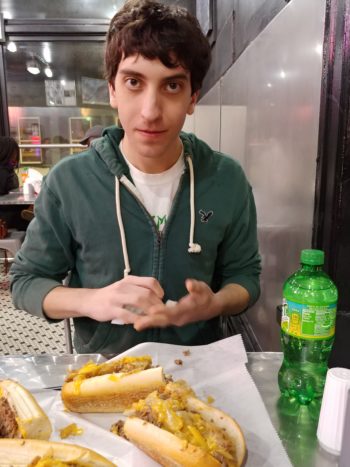 South Street was nearly abandoned, because of the weather, but Jim’s was fairly busy. I parked on the street, CERTAIN I’d return to a parking ticket. The kiosks were all reading OUT OF ORDER for some reason, so I couldn’t pay if I’d wanted to. And the sidewalks were as slick as cat shit on a marble floor. But dinner was fantastic, as usual. Jim’s is my favorite cheesesteak. I don’t call myself an expert, of course. But I know enough to have an opinion. Here’s the boy sitting in front of our sandwiches.

There was no parking ticket waiting for me, which was a surprise. Oh, I’ve been to Philly many times… And while we drove back to the bizarre venue, I could feel the streets getting slushy and slick. Dammit! And then we got into an argument while looking for a place to park. We ended up on a public lot blocks away, which is exactly what I didn’t want to happen. But whatever. The guy there could barely speak English and was shouting, “You pay later! I be here! We settle up then!!”

So we hoofed it over to that freaky mausoleum building through a driving rain/ice pellet onslaught. And by the time we got there I was soaked all the way through. My shoes were 100% saturated, and it was like I’d just climbed out of a lake. Again: bullshit.

And I’ve been to many, many rock shows, and have never seen a place this small. Well, maybe bars. But this was no bar, this was a concert venue that looked like it might hold 150 people at full capacity. But it wasn’t at full capacity on Sunday night. I’d guess there were 75 people there. It was crazy. It felt like a private party with one of the coolest bands in the world playing later in the evening.

While the opening act performed, I noticed that Bid — lead singer of The Monochrome Set — was standing right behind us watching the show. It was surreal. It really did feel like a party. The openers, by the way, were The Jetbeats, and they were great. Reminded me of The Smithereens.

Then The Monochrome Set started setting up their own equipment. Bid was out there putting drinks on the monitors, and getting everything situated. No roadies… these guys travel light. And they were amazing! They did all the songs I’d hoped for and were utterly fantastic. I snapped the photo above, it’s not stolen from the web for a change. I noticed there were quite a few other dads there with sons. I wasn’t the only one. We have to pass this stuff on, it’s an obligation. This stuff is important! It’s the Monochrome Set! There’s some kind of crazy magic in that music.

So, that was a complete grand slam. But the ride home SUCKED IT. It was a true sphincter-clencher sustained across several hours. The turnpike was plowed in some sections, and not in others. And on the unplowed parts, cars were sliding around and it was scary. I’m not even sure my anus has ever fully released. Sweet sainted mother of Stuart Goddard! One to three inches my big riffled ass! Accuweather was the most accurate, and they were the ones I didn’t want to believe. It was horrific. Bad times for Jeff Kay, indeed.

But… as I finally pulled into our driveway at 2 am, I realized I was happy I’d done it. I wasn’t so sure 20 minutes or two hours earlier… Where do I collect my true fan points?

I hope you notice I didn’t talk too much about the music itself. I’ve been doing this long enough to know that that’s a non-starter. I’ll just go on and on about it at work and spare you guys here. No need to thank me.

By the way, I have the new podcast back, but don’t have time to post it before work. I’ll upload it tonight when I get home. UPDATE: It’s up!