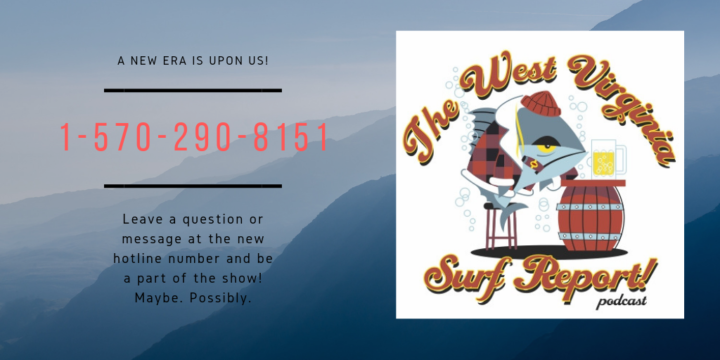 I mean… if somebody calls and just shouts racial slurs for three minutes I won’t be using it. But you know what I mean. If it’s reasonable and engaging, I’ll probably include it in a future show. It’s set up for voicemail, no human will ever answer the number. You’ll hear my pre-recorded raspy hillbilly voice, a beep, and then it’s your turn to go to town with it. A few things I’m looking for:

I’m hoping you guys can send the Surf Report podcast off on some “who could’ve predicted that shit?!” jags. It could be fun! Maybe. If you have something for the hotline, call it now! It’s a Google Voice thing, which I barely understand. But I’m reasonably sure I have it set up correctly. Call in today: 1-570-290-8151.

I’m going to Kansas City on Sunday. When they first started talking about this, it was going to be 11 or 12 days. Now it’s flying there on Sunday, working Mon/Tue/Wed, flying back on Thursday. That’s better. I don’t even know if I have 12 days worth of clothes. I might’ve been wearing my Magnolia Thunderpussy t-shirt by Day 10.

The thing that makes me slightly uneasy about this is… I don’t know what I’ll be doing out there. I’m not sure what the expectations are. It’ll be fine, but the unknowns never fail to make me a little anxious.

The good points: the $75 per day meal budget. It doesn’t include alcohol, so I’ll just have to go with various high-end meats. Ha! When I went to Rhode Island a couple of years ago, I never got anywhere near the $75 threshold. Breakfast and lunch were always covered, so I was only paying for dinner. And even with the high-end meats we never got close. I plan to do better this time.

Also, it’ll just be nice going somewhere I’ve never been. I’m all for exploring. I hope we’ll have some time to poke around a little. The schedule lists a daily stop time of 5 pm. If that’s true, it could be interesting. Maybe we’ll be able to get into some shenanigans. Regardless, I’ll keep detailed notes and tell you all about it when I return.

Almost immediately after we get back, Toney and I and the two boys are going to the Rock ‘n’ Roll Hall of Fame in Cleveland. We’re just driving over there. I’ve been there before, but the other three have not. I think the younglings will like it, and Toney will tolerate the whole thing. It’ll be a quickie trip, something we’ve been wanting to do for several years. The boys are obsessed with music and I believe they’ll have fun. I’m just looking forward to the Toto room and the Little River Band alcove.

One thing I remember about that place which I found baffling: almost no Bob Dylan stuff, but SHITLOADS of Todd Rundgren paraphernalia. Seems weird to me. Hey, whatever. Todd released a good album or two amongst his thirty or so. And he’s a great producer, I hear.

Another thing that sticks out in my mind: drawings of football players by Jimi Hendrix from his high school days. I love stuff like that. Yeah… it’s cool (I guess) to see his guitars. But just stuff from his everyday normal life has a bigger impact. For me, anyway. The drawings aren’t very good (but not terrible), and look like something you’d see tacked to a wall in any high school art class. It humanizes the myth if you know what I mean.

I also remember some handwritten original lyrics by Paul Westerberg of The Replacements. Maybe “Left of the Dial?” I can’t remember the specific song but thought it was cool that they included it. A small amount of respect, anyway…

Have you been to the Rock ‘n’ Roll Hall of Fame? What sticks out in your mind? Tell us about it, won’t you?

Also, what’s the most memorable thing you’ve seen in a museum? Something that truly blew your mind? When I was a kid we went to the Baseball Hall of Fame in Cooperstown, NY and they had a telephone receiver you could pick up and Babe Ruth was on the other end wishing you a great day, or somesuch. I thought that was incredibly cool. I’ve been back many times in more recent years, and that telephone is long gone. Why?? They do, however, have boxes that you can open and the faint smell of popcorn or hotdogs will waft out. Fairly bizarre.

Whatever you have on especially memorable museum displays… please tell us about it in the comments. I can also remember seeing bloody items from the Lincoln assassination when I was in sixth grade. That made an impact. What do you have on this one? Please use the comments.

It’s weird, ’cause I’ve seen all sorts of “important” works of art and historic items. But some unusual ones just stick out in my mind for some reason.

And speaking of the podcast, I released a new episode yesterday with some original rockin’ intro/outro music. Straight out of Argentina, baby! Check it out here. This is the summary:

In this one, I share some classic stories from my vast work history. A couple have never even been discussed at the website if you can believe it. You’ll hear about the shoplifter who attempted to escape by hanging off the side of an airbrushed van, a boss who probably should’ve been in movies, the guy who thought his phone was on mute during a conference call, a middle o’ the night visitor at the Toll Bridge, and a giant ball of dough on the heating duct. I hope you enjoy it. Thanks for listening!

Have a fantastic rest o’ the week.

And don’t forget about the hotline!