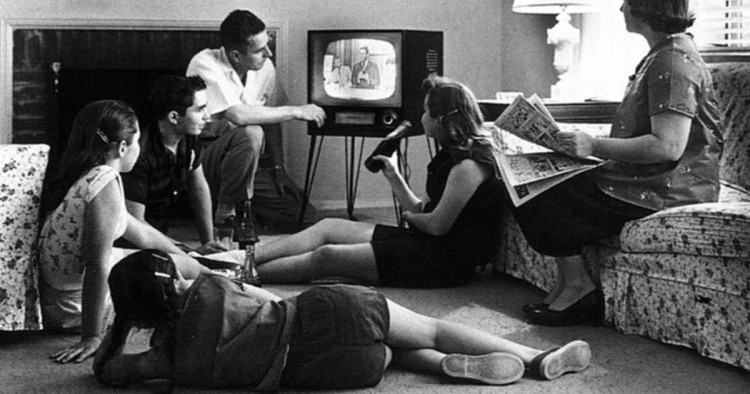 We didn’t go to Atlantic City. We canceled at the last minute, for various reasons. High on the list: our kids apparently can’t be in the same room for more than 30 minutes without arguing. In fact, a few nights ago it escalated to a near fistfight. Yes, the jackassery is strong with those two at the moment. Leaving them alone for a couple of days probably wouldn’t have been among our wiser decisions.

Also, we started thinking about the money we’d spend on that little adventure, and decided to buy a new TV for the living room instead. The Gordon Ramsay dinner alone probably would have cost more than what we ended up paying for something we’ll likely use for many years. I would’ve already ejected that expensive dinner into the plumbing system by now. Heck, if I’d ordered bangers ‘n’ mash, like I planned, it probably would have even looked roughly the same coming out as it did going in.

So, on Saturday we waded into the sea of humanity in search of a good deal on a 40-inch TV. We started at Target. In last Sunday’s newspaper ad they had a really good deal listed. However… nearly a week had gone by, and I knew they were likely sold out. And they were. We even drove down to the Wilkes-Barre location, to see if they had it there. No dice. Their website, by the way, said something like “low stock” at both stores. It didn’t say “sold out,” it was something more ambiguous, and designed to make a person want to give it a shot. But, “sold out” would’ve been more accurate.

There was a lot of trashiness going on in Wilkes-Barre: ripped windbreakers with the Pizza Hut logo on the back, gray sweat pants with dress shoes, etc. So, we returned to the Scranton area, where things are at least 10% more civilized. We had lunch at Chipotle, hoping not to ingest any of the Mexican shit water they apparently use on their produce, and plotted our strategy. The roads and stores were so crowded, we were right on the cusp of saying fukkit. But if that were to happen… there’s a very good chance the new TV would not happen at all. Oh, I know how these things go. So, I pushed for continuing the quest.

And we hit the jackpot at our next stop: Best Buy. We got a 40-inch Samsung, for a very good price. I think it’s this one, and we paid slightly less. Nice.

It was exciting! We still had an old tube TV in the living room, that couldn’t connect to the WiFi or anything. We would be entering a whole new world upstairs. Of course the Big Ass TV in the family room is loaded up with all the bells and whistles, but Toney and I spend most of our lounging time upstairs. Now we could make use of Netflix and Amazon Prime on “our” TV too.

We stopped and bought 12 bottles of this fantastic beverage, and all that was left to do was go home and set up our new gateway to happiness. However… this is where things often take a dark turn. Setting up electronics is not my strong point, and I have a low tolerance for “issues.” Know what I mean? Oh, everything could easily go south during the set-up process.

But it was flawless. We had that baby running wide-open, fully-configured, within minutes. We successfully incorporated the cable box and Blu-ray player with no issues, whatsoever. It was a Christmas miracle!

One small bump in the road: there was no Amazon Prime icon. But I was reading online about how to add it, grinding my molars a bit, when a software update began to download. And when it was finished, there was Amazon! It was crazy. As if the gods of electronics were watching over us…

And now we’re thinking about taking it up a notch and subscribing to Hulu. Are we overplaying our hand? Are we allowing the new-TV frenzy to turn us greedy? Hey, they have all six seasons of Green Acres on there, which is about all I need to be sold on it. And I think they might have other things, as well. Not sure. I only checked Green Acres.

My goal: To become one of those assholes who bitch about being overly busy all the time, then proceed to tell you about the 12 TV shows they watch religiously, and all the movies they saw over the weekend. I don’t want to get cocky, but I think I can do it. Always reach for the stars, my friends!

How’s your holiday prep coming along? We (Toney) are pretty much finished. I have to buy a couple of small things, but it feels like we’re way ahead of the game this year. I’m not sure how we (Toney) pulled it off, but I’ll take it.