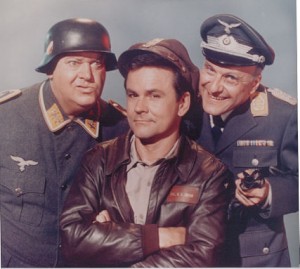 A few days ago Toney and I were talking about Hogan’s Heroes, and how amazing it is that such a show was ever on the air.  Especially just twenty short years after World War II ended, when most of the survivors were still alive and kicking.

I mean, a sitcom about Nazis?  It seems improbable to me.  But I guess 1965 was a different era, huh?  Apparently the paint stirrer of righteousness wasn’t so firmly inserted in our collective ass at that point?

Indeed, if someone were to pitch such an idea for a show today, I have a feeling they’d be run out of town, and branded “dangerous.”

Sure, the German characters on that program were cartoonish buffoons, but they were running… a Nazi war camp.

How are we to know Colonel Klink wasn’t gassing Jews off-screen, or ordering gays into the oven?  What’s to say Sergeant Schultz wasn’t in charge of maintaining an orderly mass grave operation, and was known for his ability to keep the skulls from getting mixed-up with the femurs?

Heck, I think Hitler himself even appeared in a couple of episodes.  Well, not the real Hitler, I don’t think he did much TV work, but an actor portraying him.  And if there’s one thing that’s just flat-out shit-your-pants funny, it’s Adolph Hitler.  Right?

Don’t get me wrong, I have no problem with Hogan’s Heroes.  I’m a big fan of finding humor in all the wrong places.  I just think the whole thing’s amazing, that the show was on the air and people didn’t raise nine brands of hell about it.

What do you think would be a comparable premise for a modern-day sitcom?  A laugh-out-loud comedy about Hurricane Katrina?  A zany romp through the Oklahoma City bombing?  Two completely different characters, one a slob and the other a neat freak, trapped in the north tower of the World Trade Center?

Also, what other old TV shows would never make it on the air nowadays?  I can think of a few, without putting too much effort into it.  But I’ll let you guys handle this one.  Use the comments.

And I think you might be right…  J.J. and Michael isn’t going to cut it.  I thought of it at work a few nights ago, near the end of a 10 hour shift, and thought it was a fantastic idea.  But now that I’ve gotten some distance from it, I realize I probably just needed some sleep.

I’ll work on it some more.  But for the time being, our kids will remain the Secrets here.  And maybe that’s what I’ll keep calling ’em.  Screw it, I’m losing interest in the whole exercise.

I almost used the word “duress” up above, instead of “need some sleep.”  And it reminds me of a story…

When I worked at Peaches Records, in Greensboro, I was the buyer for CBS products — now known as Sony.  Near the front of the store was a large dump-bin, where we’d sell LPs and cassettes at 2 (or 3) for $9.99.  We’d sometimes have WEA product in there, or Capitol, or Polygram, or whatever major label we were featuring.

One day the store director told me to write up an order for an upcoming CBS sale.  At the time, a dance group called Club Nouveau was having a big hit with the old song “Lean on Me.”  The original artist was Bill Withers, and his records were released through CBS.  So I bought a full box of his greatest hits, on both vinyl and cassette.

And Jeff, the director, almost dropped a plate when the product arrived.  He kept screaming at me:  “Are you under duress?!  Why’d you buy all that shit??  Bill Withers?!  We couldn’t sell fifty copies in ten years!  Seriously, are you under duress??”

But I’d show him.  “Lean on Me” was hot stuff, and the original would fly off the shelves.  I just knew it.  And he’d have to apologize, when my superior purchasing instincts were revealed.  Over time I’d be proven right, and Jeff would have to admit it!

Yeah, we didn’t sell any of them…

And for the rest of my life the word “duress” will take me back to yet another humiliation from my ridiculous past.  Oh, there are plenty of humiliation triggers, and they come fast and furious.

For three days in May I’m going to an undisclosed location, with no TV or internet or cell phone service.  The goal will be to spend at least ten hours per day working on my so-called book.  I need to make some real progress on that thing; I’m starting to panic.

I try to write at the library, but it’s the loudest place in town.  An old man, shaped like a lower-case r, is always hanging around in there, shout-talking about politics.  And the joint is constantly lousy with teenagers, who whisper louder than I talk.

Working at home, for any extended periods, is difficult as well.  The phone never stops ringing, and there’s more electronics running wide-open, than at the local Best Buy.

The book needs to be a minimum of 50,000 words, and at the rate I’m going, I’ll be dead several years before it’s finished.  I’m feeling the need to put in some concentrated effort, hence the undisclosed location.

Afterward, I’ll tell you where it is, but not now.  A clue:  it’s less than ten miles from our house, and the cost will be a total of $99.  Heh.  It’s some weird shit, but hopefully it’ll pay off.

And I’m going to stop right here.  It’s a beautiful day outside (not so much inside), and I think I’m going to go for a long walk.  I need to hoist myself off the riffle.

No update tomorrow, I’m afraid.  But I have something mildly amusing planned for mockable.  So, be sure to keep checking it.  Today’s update is live now, and you can read it here.

Have a great weekend, children.