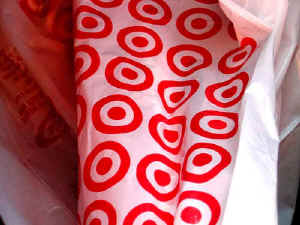 We’re going to West Virginia on Wednesday night/Thursday morning, and I feel like everything’s in disarray.  None of us are prepared.  Toney’s taking some sort of class today and tomorrow, and I have to work my vampire shift the next two nights.

So, we’re almost literally going to be throwing clothes into a bag, and driving away.  I’ll probably get down there and have seven pairs of underwear and nothing else, for a four-day trip.  Or it’ll be the exact opposite, and I’ll be at Wal-Mart buying an emergency bale of ball-socks at 11 pm, while wearing a Target bag under my jeans, with leg holes cut out of it.

“Anything else?”
“No, just that sack of enormous underwear and a York peppermint patty, thank you.”
“Jeff?”
“What?”
“Are you Jeff Kay?”
“Um, yeah.”
“It’s me, Karen.  From high school?  I maintain the Dunbar High facebook page?  I can’t wait to update everyone on seeing you!”
“Jesus Christ…”
“What’s that rustling sound?”
“I didn’t hear anything.”

It’ll be fine once we get there, but I’m not looking forward to the drive.  It’s about 530 miles, and a good percentage of it is on I-81.  Or, as it’s more commonly known, the Devil’s Parkway.  And the rest is way out in the middle of nowhere, where cellular phones are turned into nothing but a prop.  It’s an exhausting, long-ass journey.

One of the most important parts of such a trip, of course, is the music selection.  I will have to set aside an hour or so to gather together the proper CDs for our excursion.

It’s not something that can be done all willy-nilly, and haphazardly.  If you make the wrong choices, it’ll add to the pain, instead of lessen it.  Earlier this summer I was pressed for time before a Knoebels trip, and relinquished music control to others.  A BIG mistake.

There will be four of us, you see, and you’ve got to take everyone into account.  You can’t just choose for yourself, which is what happened on the amusement park trip.  And you can’t have quiet stuff, or anything overly intricate or complicated, either.

It’s also advisable to choose CDs that are familiar to everyone; a long car trip with kids is not the time to expand your horizons.  You’ve gotta play it reasonably safe.

So, I usually go with classic rock.  I always grab Tom Petty’s greatest hits, a 2-disc Cars anthology, a Police best-of, and that sort of thing.  Paul McCartney and Wings work well, as well, and maybe a little Def Leppard and Van Halen.

If the dynamic was altered in some way, if one or more of us weren’t going, it would change the music selection completely.  It’s gotta be tailored especially for the audience at hand.  And, I hate to say it, but nobody else in our family fully understands the way it works.  I have to be in charge of this task, or it’ll be all wrong.  All freaking wrong.

I’ll leave you now with a weird Question that popped into my tiny Duke head this morning, while stressing about the WV trip…

If you were suddenly told you’re being forced to live alone in Siberia for a year, and could only take three personal items with you, what would they be?  I’m not talking about clothes, and stuff like that, but comfort items — things that remind you of home, or keep you sane.  You know, like a particular CD, a book, or a picture or something.

No cheating and saying “my 120 gig iPod.”  It’s gotta be three individual items, not your entire music library in mp3 format, or your Kindle with 10,000 books saved to it.  That’s cheating, and not keeping with the spirit of this questionable exercise…

Here’s an absolute automatic for me.  Whenever I’ve moved, and had to spend an extended period alone in a strange city, I’ve had that CD.  I don’t know why, but it works for me.  It’s my standard companion.

What about you?  Use the comments link below.

Please note:  I also updated at 3am this morning, so don’t overlook that half-assery… I mean, fine achievement.  Here’s the link.