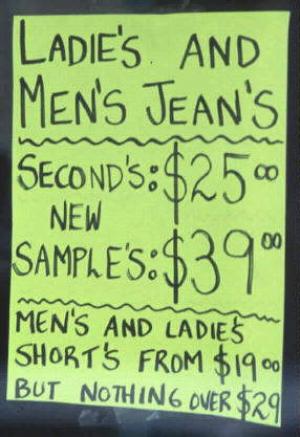 My employer gives everyone a frozen turkey every year for Thanksgiving, and it’s a nice gesture.  However, there are signs posted all around the building reminding us to pick up our “turkey’s” on Tuesday, Wednesday, or Thursday.  And that unnecessary apostrophe taunts me.

It says, “I am strong, and you are weak.  I know I don’t belong here, but there’s nothing you can do about it.  Nothing!  Even if you decided to go full-crackpot and make an issue of it, I’ll just pop up somewhere else, in a day or two.  You can not defeat me!  I am the unnecessary apostrophe, and you are… NOBODY!!”

It’s upsetting.  Because that evil bastard is right.  I have no recourse.  Oh, I might be able to do something about the “turkey’s,” but in a few days they’d just start taking “donation’s” for something, and we’re back to square-one.  As long as there are words that end in the letter S, people will believe an apostrophe is necessary.  And the scourge will continue.

Anyway.  I was listening to the Stiff Little Fingers earlier, and got up to take a shower.  Yeah, sorry for putting that disturbing image in your brain…  But I showered, and headed back to the bunker.  And as I approached the doorway, I heard some Irish guy talking.  What the?  The floor of my ass nearly fell out.

The panic only lasted a second or two, but it packed a punch.  I thought, for that brief period, that an Irishman was in our house for some reason, pontificating with enthusiasm.  But then I remembered…  There’s an interview at the end of that CD, with the leader of the band.  Shit!

Back during the 1970s my grandmother was taking a shower (no!  good god, no!!) and a so-called “laughing bag” somehow fell off the arm of a couch.  So, when she turned off the water, she heard uproarious laughter coming from the living room.  She nearly had a coronary.  Of course, a few years later she had a REAL coronary, but that’s a different, less-amusing story…

I’ve also heard Adam Carolla tell a story about coming home drunk, and going straight to bed.  And during the middle of the night the TV in his exercise room turned itself on — because of a timer that was mistakenly set or somesuch.  The volume was cranked way up, because he watched it while working out, and there was some fire and brimstone preacher on.  So he was awakened by someone shouting about eternal damnation and hellfire, and he almost shit the credenza.

If you guys have any stories to tell about times when you thought somebody was in the house with you, or something similar, please share them in the comments section.

And this is Wednesday, so I need to cut this one a little short.  I have a staff meeting to scowl my way through…  But before I go, I want to thank whoever purchased this confusing thing at Amazon a few days ago.  He or she clicked through one of my links, and now I’ll receive six percent.  Just one extra click, and it helps me a great deal.  Please don’t forget the extra click, even if you’re buying something less expensive than a milling machine, or whatever.  Thanks, folks!