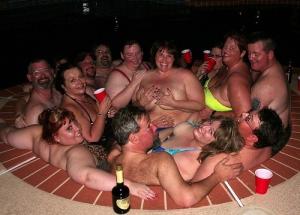 I’d like to see the first two Godfathers someday, and am not totally opposed to trying Lucky Charms. It’s those dusty little pencil eraser “marshmallows” that concern me… The two things I’m about to tell you about now are in a different category. I’ve dug my heels in, and will hopefully never be faced with having to engage in either of them.

Gotten into a hot tub  Over the weekend Toney showed me a photo of one of her Facebook friends in a hot tub, outdoors. There was snow on the ground, and three or four people were in this thing, holding wine glasses, and smiling like idiots.

During my life I’ve been invited — nay, pressured — to climb into one of those bubbling cauldrons of ass ‘n’ ball water. And it’s not going to happen.

A couple of times we’ve been at a person’s house, and the host came out and tossed a pair of swimming trunks in my lap. It’s gotten that far into the process, and I’ve still refused. For one thing, I’m not wearing somebody else’s trunks. Ya know? That cock-net thing is not meant to be shared.

And I think people have sex in hot tubs. It would be like slowly lowering myself into a semen bisque. Call me crazy, but I have no interest in such things.

In the Poconos, which is near here, they’re famous for hotels with hot tubs in each room. I can’t imagine such a thing. I won’t even sit on a hotel bedspread. There is no way I’m soaking in the sexual/anal secretions of the last fifty people who rented my room. Good god!

What’s wrong with just, you know, sitting a chair?

Engaged the services of a hooker  Years ago, when I was in the music biz, I was sitting in a sales meeting and some label guy (Virgin, ironically) told a story that almost shocked me. Not completely, but almost.

He said he’d recently spent time in Reno, and visited one of the bordellos there. He told us he’d never had sex with a prostitute before, and viewed it as a “rite of passage.”

Seriously? That’s something you’re supposed to aspire to? Sex with a whore? Again, I might be the weird one, but that is not an item on my bucket list. Never has been.

When it gets right down to it, I’m not really a fan of sleaziness. I couldn’t even enjoy myself at the few strip clubs I’ve visited. Maybe I’m missing a gene or something, but sleaze just doesn’t appeal. Hiring a hooker is about as likely to happen to me as going on a firewalk with Oprah, or something.

The dude went on to tell us about how the woman at the whorehouse told him to go into a room, take off all his clothes, and wait. Later, he found out he’d been on closed circuit TV, and piped into the main waiting room, where a bunch of truck drivers were watching him try to “plump himself up” a bit, before the ladies arrived.

This guy was roughly my age, and clean-cut. I couldn’t believe it.

There was also an older man who worked there that supposedly hired hookers when he was on the road, and made them strip and sit in the bathtub. Then he’d pee on them, pay their fee, and send them on their way.

When I lived in Atlanta I was sometimes approached by prostitutes on the street. They always said, “Do you need a date, honey?” Apparently there’s an approved whore script, written and revised many years ago? I’m not sure. But these women usually looked like drug addicts, had a voice like Mike Ditka, and skin the color and consistency of pork rinds.

But, even if they looked like Playboy models, I don’t think I could’ve done it. I would’ve been catastrophically undermined by the sleaziness factor.

I need to go to work now, so I’m going to turn it over to you guys. I had a third item, but I’m all outta time. If you have anything that fits into this category, please share. We’re looking for possibly surprising things you’ve never done, and hope to never do. Use the comments link below.

And don’t forget about our Amazon links. Simply pass through one of them before doing your holiday (or personal) shopping, and I’ll receive a small percentage of whatever you spend. Please try to remember. It helps a great deal.