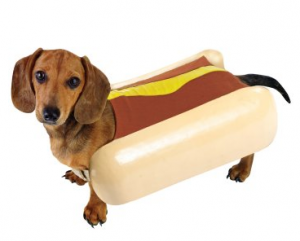 Yeah, I’ve got nothing.  The ten or so unused items in my notebook aren’t doing it for me (a wiener dog the size of a german shepherd?  what??), and I can’t work up much enthusiasm for the retelling of some old tale.  So, I’m just gonna describe the bunker to you — my little writing chamber/sanctuary.

The Surf Report bunker is literally a former walk-in closet, off our family room.  In fact, the bar is still in here, where you can hang-up your coat or whatever.  I have a feeling the family room was used as a bedroom in the past, because of this large closet, and the evidence of a locking door having been in place at one time.

But the woman who lived here before us also used the space as a home office.  I remember being in here with all her junk, during our initial walk-through.  There was a plastic shelving unit that tilted radically, and papers and files where everywhere.  I can’t remember what she did for a living, but it was something from home.

Oh, it was a tragically dull office, but I fixed that problem.  I went to Lowe’s and bought some babyshit green paint, and put two coats of it on the walls.  Then I started hanging stuff on the walls, brought in a stereo and a ton of CDs.  A dormitory fridge was placed in the corner, where I sometimes keep beer and Mountain Dew.  Although it’s empty right now…

On the floor is some thin and very cheap carpet, beige in color.  It wasn’t too old or worn, so I left it.  And there’s a real door, and not some accordion deal, or anything like that.

To the left of my computer desk is a two-drawer file cabinet, with a copier/scanner on top.  There’s a Nikon Coolpix camera on top of the copier at the moment, along with the earbuds for my iPod, and a 2 gig flash drive,

My computer desk has a shelf above the monitor, where I’ve got a vintage Budweiser bar lamp (purchased at a flea market for ten bucks or something), autographed baseballs from Mickey Mantle and Johnny Bench, my high school class ring, a British pound coin, a small vase from Kanawha Glass (located in Dunbar, WV many years ago), a Matchbox version of the Andy Griffith Show police car, and a whole bunch of writing books.

On the walls I’ve got all manner of stuff:  an autographed photo of Dan Aykroyd (“Jeff, rock on!”), a 1962 West Virginia license plate, a platinum album award for REM’s Out of Time, and a giant plaque from the time I won the Video Inventory Manager of the Year award at Warner-Elektra-Atlantic, a former employer.  And that’s just the wall behind my computer.

The wall to my right:  Cincinnati’s Big Red Machine team photo from 1975, an autographed picture of REM (Michael just drew a peace sign, the hippie), a photo of me and Iggy Pop sitting on a couch, a DC Comics calendar, a vintage photo of Dunbar City Hall, an old picture inside Gillespie’s Barber Shop, (where I got my hair cut as a kid), an autographed photo of Soupy Sales, a soup ladle autographed by the guy who played the Soup Nazi on Seinfeld, and a shelf with an old 1940s radio that was used by a music-loving aunt who died in a tuberculosis sanitarium before I was born.  Among other things…

The other wall:  a framed Animal House poster (the one where the whole cast is flipping the bird), an old Rockpile poster, an uninspiring clock, autographed photos from Carl Reiner and the Olsen Twins (two different photos), and a picture of Bobby Thompson’s “shot heard round the world” home run, signed by both Thompson and Branca.

Behind me is a table piled high with CDs and books ‘n’ crap.  My 80 gig iPod is plugged into a docking station/stereo system there, as well.  The thing is almost maxed-out, with roughly 15,000 songs on it.  It’s always playing when I’m at my computer, almost without exception.

And on the floor are a bunch of books, and my laptop computer, inside a Jack Bauer “Jack Sack.”  On top of the fridge is a vintage-looking oscillating fan, which comes in handy when it’s hotter than a July scrotum in here.  Propped beside the fridge are game-used bats by Johnny Bench, Joe Morgan, and Ken Griffey Sr.

I love the bunker, and spend many, many hours inside.  It’s a true sanctuary, and subterranean base of operations.  When I get up in the mornings I start a pot of coffee to brewing, and walk straight to my office.  On weekdays I spend almost my entire non-sleeping, non-working hours there.

And that’s a casual description of my office.  If you feel like it, please tell us about your home workspace.  All of them are unique, I believe, and I’d like to know about yours.  I really would, I’m a nerd about such things…

In fact, if you email me a photo, I’ll start a gallery of Surf Reporters’ home offices.  Maybe help us put a name with a space…  Get it?  Pretty good, huh?

And this concludes another dispatch from the bunker.